Daily Mail
Share on FacebookShare Share on TwitterTweet
EXCLUSIVE INTERVIEW: Before leaving for the Africa Cup of Nations, Caulker was scrolling through old photos when he found a clip of the young girl from the school he built in Sierra Leone.
I built these kids a school… now I want to win them the AFCON: Ex-England defender Steven Caulker is targeting glory with Sierra Leone - and after bouncing back from alcohol and gambling struggles, he wants another crack at the Premier League

By Matt Barlow for the Daily Mail

The night before leaving for the Africa Cup of Nations, Steven Caulker was scrolling through old photos when he found a clip of the young girl from the school he built in Sierra Leone.

'I'm not someone who cries but that always gets to me,' said Caulker. 'She sang a song for me and whenever I watch that video it gives me the same feeling, it's overwhelming.

'Just as it was when I was there, taking selfies with children who'd never seen their own reflections because there are no mirrors or cameras, it's such a remote village. You could see pure joy and excitement in their faces.' 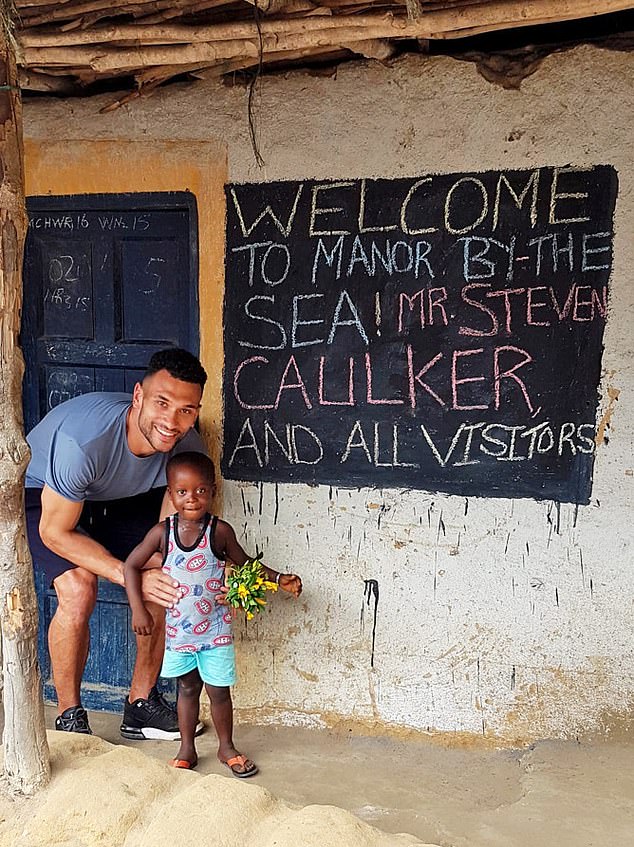 Steven Caulker helped build a six-classroom school in Sierra Leone after raising over £25,000

Sierra Leone, who kick off their Africa Cup of Nations campaign against Algeria on Tuesday, is not a footballing flag of convenience for Caulker. He has strong bonds with the African nation where his grandfather William was born.

As a Cardiff player, Caulker raised £25,000 selling signed shirts from stars including Gareth Bale, topped it up with his own money and, with the help of the charity Action Aid, built a six-classroom school complete with its own well for 400 children in the district of Kambia.

The Ebola outbreak made it difficult over the years but he has visited several times, taken his son Louis, 10, and paid a visit to his grandfather's old village Manor-by-the-Sea. 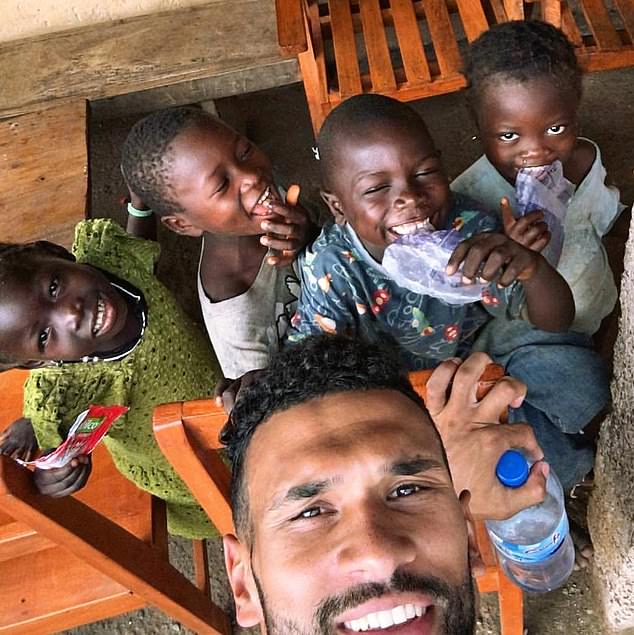 Built in Caulker's grandfather's village of Kambia, the school educates over 400 children

'Sierra Leone is a third world country,' said Caulker. 'There's a lot of struggle there and I've always tried to do my bit and be hands-on because of my grand-father who moved to London in the 1950s and married my Scottish gran, Jessie.

'After Ebola, I met families who had lost their parents and was involved in projects after the landslides in 2017. Football is one of the things that brings them joy.

'Our players who grew up in Sierra Leone inspire those children who think they could be like Kei Kamara or Mustapha Bundu. It is exciting for me. Yes, I want to experience international football, to play at the highest level.'

'I had a very small taste of that with England, but when I walk out to represent Sierra Leone I will be thinking of all that. And all the people waiting outside the hotel before we left for Cameroon, running after our bus as we went off to play in the Africa Cup of Nations for the first time in 25 years. It's so much greater than football.'

At 30, Caulker has been on quite an adventure. Through a blur of experiences from his emergence as a defender at Tottenham and the London Olympics to a goal on his England debut in November 2012 before tumbling into trouble with alcohol, gambling and depression and reinventing himself in Turkey. 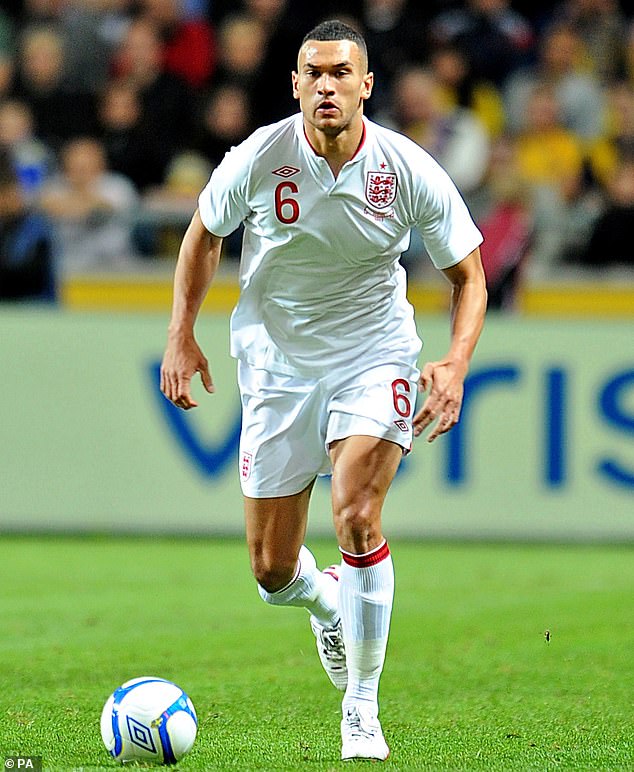 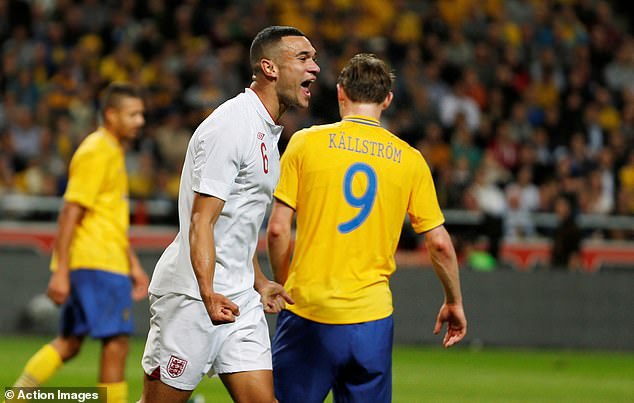 'A long road,' he said. 'I made my England debut at the age of 20, scored a goal, Danny Welbeck put us 2-1 up and then I came off to witness Zlatan's brilliance. Obviously, that somewhat overshadowed me but when I mention it to anyone they go, "Oh that game'" Everyone remembers it. It was the Zlatan show.'

Sweden were opening the national stadium in Stockholm and their talisman Zlatan Ibrahimovic scored all four in a 4-2 win, including an unforgettable overhead kick from 40 yards.

'It was a special moment for me to wear the England shirt and make my debut at the same time as Raheem Sterling, to play with Steven Gerrard, but it's a long time ago and I've drifted away from England.

'I was upset to miss out on World Cup selection in 2014. They sent a text to say Roy Hodgson would call everyone whether we were in or not. He never called. I sat by the phone all evening. That was quite disheartening and to be honest quite rude. I'd been around the squad for the best part of two years and it left a bit of a sour taste.'

It proved his final involvement with England.

'I know a few of the boys in the squad, and I watched them in the Euros with pride. What Gareth Southgate is doing is incredible but I don't feel any connection.' 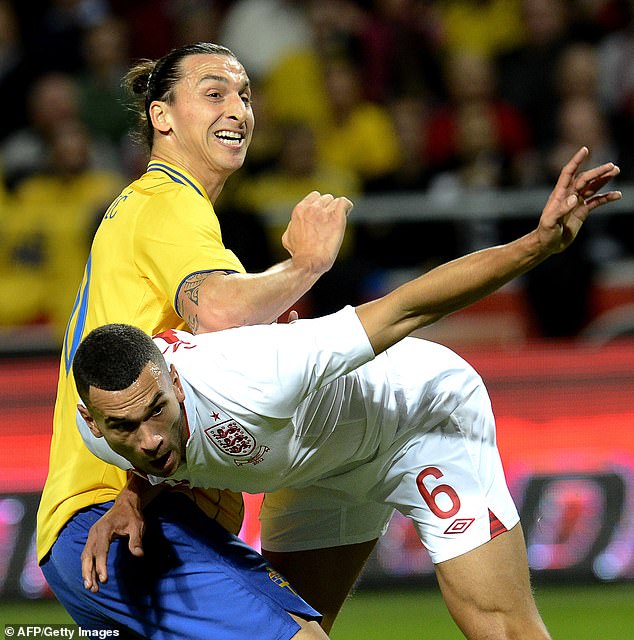 Caulker pictured battling with Zlatan Ibrahimovic, who scored four goals during the game

From the London Olympics in 2012, there are fond memories from the opening ceremony, selfies with USA basketball icon LeBron James, and the roar of Cardiff's Millennium Stadium where Great Britain beat a Uruguay team containing Luis Suarez and Edinson Cavani.

'One of the best atmospheres I ever played in with the whole country coming behind us,' said Caulker, who will frame a Sierra Leone shirt to go with those from England and GB. 'It will tell my story perfectly, a contrast of colours, nations and influences.'

Caulker moved to Turkey in 2019, joining Alanyaspor on the Mediterranean coast as he sought to piece his life back together.

'I went there a broken man,' he said. 'I had been sober for a month or so but a month is nothing. When the opportunity came I grabbed it with both hands.

'Alanya was an amazing place to live. I was on the beachfront with a sea view and the sun all year round. It was therapeutic, a wonderful place to get away from all the madness I'd gone through.' 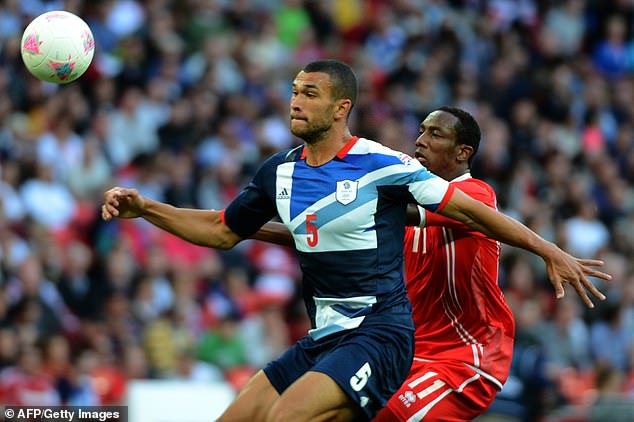 Caulker produced the best, most consistent football of his career and Turkey's biggest clubs, Fenerbahce, Besiktas, Galatasaray and Trabzonspor were jostling to sign him last summer.

He opted for Fenerbahce but a managerial change on the eve of this season left him unwanted.

'I'd got the big move I wanted and worked hard for, and that was difficult to take,' said Caulker, who agreed to a year on loan at Gaziantep, close to the Syrian border.

With little future at Fenerbahce, a big decision looms at the end of the season and he would love to return to the Premier League. 30-year-old has had stints at Turkish Super Lig clubs Alanyaspor, Fenerbahce and Gaziantep

'Coming away served a purpose,' said Caulker. 'Gave me a footing on the road to sobriety but I'm over three years sober now and to be back home close to my son, my family and friends, my support network would be brilliant.'

First, the Africa Cup of Nations, with Sierra Leone, a team with seven UK-born players in the squad and a head coach, John Keister, who was born in Manchester and played for Walsall among others.

'I called my dad and said imagine that after all these years,' said Caulker, who held talks with Scotland before Sierra Leone reached out through former West Ham forward Carlton Cole last year.

'I didn't give it a second thought. When I arrived here last week I knew immediately I'd made the right decision.'