Richmond will attempt to win its third premiership in four seasons after a thrilling six-point win over Port Adelaide in a pulsating preliminary final clash.

In a contest where the the margin was never greater than two goals either way, the Tigers' experienced proved to be the difference in the second half.

It was a bitter end to a terrific 150th season in club history for Port Adelaide, who were spurred on by a vociferous crowd but ultimately fell two wins short of a premiership. 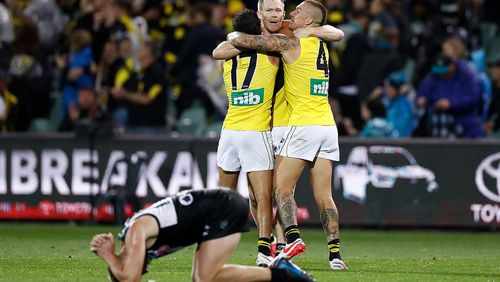 Richmond's win was made even sweeter by it being captain Trent Cotchin's 250th career game, and the skipper was full of praise for the Tigers' vanquished opponents.

"We knew we had to come here and just try to take something from them. I thought it was an outstanding match," he said.

"We don't let any of the thinking get in our way so just chug away at the process and we knew they would keep coming, they're a fantastic team. The beauty of having been there before is that you know exactly what is required.

"You always talk about prelims being amazing matches and they're really hard to win.

"Port will walk away from here kicking themselves, but they should be really proud of the way they attacked the year. It was a really challenging year for all the teams." 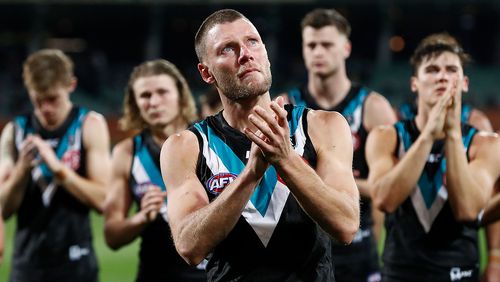 After being a poor clearance team all season long, the Tigers launched their win off the back of a remarkable turnaround in clearances.

The Power won the clearance count 20-13 in the first half, before the Tigers went 28-9 in the second half, allowing them to trap the ball in their forward 50.

In one of the most heroic acts of the season, Port Adelaide veteran Brad Ebert was left concussed in the final quarter after a spoil attempt on Jack Riewoldt.

The 32-year-old is yet to be offered a new deal amid concerns for his long-term health following a number of concussion issues this season.

Richmond will now face the winner of Saturday's preliminary final clash between the Brisbane Lions and Geelong in an attempt to seal its place as one of the great modern day AFL dynasties.