Arsenal, Leicester through in Europa

7NEWS.com.au
Share on FacebookShare Share on TwitterTweet
Arsenal and Leicester City are both through to the next round of the Europa League, while Tottenham demolished Ludogrets 4-0 to rise to second in their group. 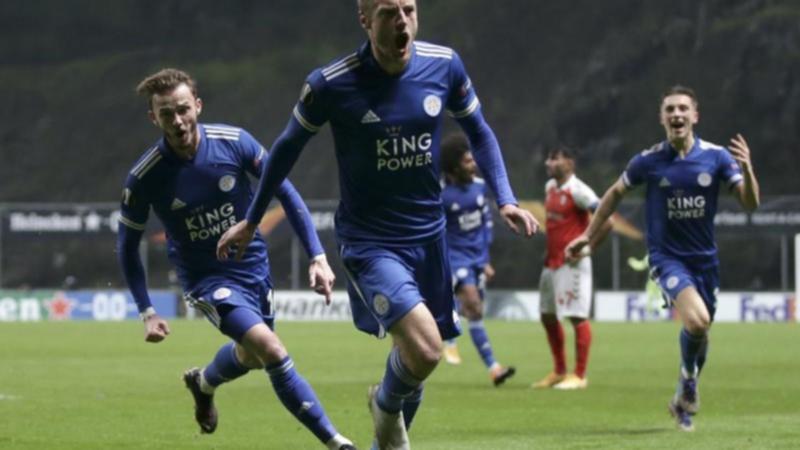 Arsenal forward Nicolas Pepe put himself back in manager Mikel Arteta's good books with the opening goal in a 3-0 win at Molde to assure the Gunners of a spot in the Europa League knockout stages.

In Portugal, prolific striker Jamie Vardy scored in the 95th minute to secure Leicester City a 3-3 draw with hosts Braga.

The goal also sent the Premier League club into the last 32 of the competition.

In London, Brazilian striker Carlos Vinicius opened his account for Tottenham Hotspur with two first-half goals while Harry Winks scored a spectacular 45-metre goal in a 4-0 win over Ludogorets.

Lucas Moura fired his side's fourth as the win took Spurs into second place in the standings with two games remaining, level on points with Royal Antwerp who won 2-0 away at Austrian side LASK.

Winks admitted he did not deliberately attempt to score.

Meanwhile, Ivory Coast international Pepe, sent off for a head-butt on Leeds United's Ezgjan Alioski and criticised by Arteta last weekend, produced a fine finish in the 50th minute, shortly after striking the crossbar with a superb curling effort.

Substitute Folarin Balogun, 19, made it 3-0 to the visitors with his first goal for the club.

But it was the performance of Pepe which left Arteta smiling.

"I am really pleased," he said of the 25-year-old's reaction. "Obviously after the disappointment, something negative, you want to see a reaction and to stand out really quickly.

"I could see from the first minute, from his body language, that he was ready to act. I think he had a great performance."

Leicester's Harvey Barnes cancelled out Ali Elmusrati's opener for Braga before Paulinho put the Portuguese side ahead.

However, prolific striker Jamie Vardy was on hand to earn the Foxes a valuable 3-3 draw with a goal five minutes after regular time.

In other results, Lille drew 1-1 with AC Milan as did Villarreal with Maccabi Tel Aviv.