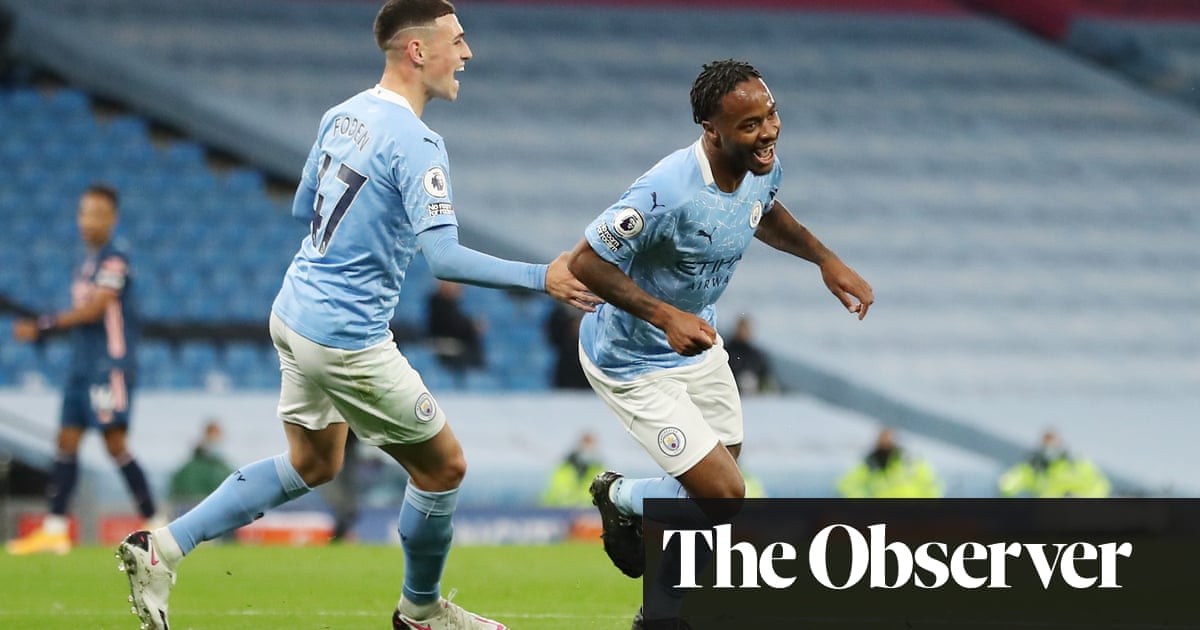 Manchester City were accomplished in victory, virtually shutting Arsenal out in the second half. Before the break Pep Guardiola’s side were almost as dominant, though a defensive fragility was again evident that will continue to offer opponents hope.

That, however, is for the future. This contest ended with the FA Cup semi-final defeat avenged by stretching to 18-2 their aggregate over their visitors in the last seven league meetings, and with Liverpool earlier drawing at Everton, it was a good day for City.

Aymeric Laporte and Benjamin Mendy were late injury exclusions, the latter out for up to 10 days and the former three of four weeks, said Guardiola, who also delivered bleak news regarding Gabriel Jesus. “He will be out for more months. He has a big problem, at the front of the leg. We have to be calm and cautious with him. He is not training.”

Sergio Agüero was back after four months following a knee injury, while Kevin De Bruyne’s muscle strain allowed Bernardo Silva to make a first league start. Rob Holding tweaked a hamstring during the warm-up – Mikel Arteta was unsure of the injury’s severity – meaning David Luiz was drafted in. Arsenal’s £45m deadline day buy, Thomas Partey, was on the bench.

Guardiola’s strategy was to have Sterling and Agüero rotate off the front, with Phil Foden and Riyad Mahrez the nominal wide players. Mahrez twice penetrated the Gunners’ rearguard along the right, his feet bamboozling Kieran Tierney enough to allow a shot then a cross.

When Arsenal were breached for what proved the winner it was via some classic City tap-and-run stuff. From the right Mahrez turned infield and found Agüero. The striker roved forward and fed Foden, whose shoulder dip manoeuvred the ball on to his right foot. Bernd Leno engineered a save but Sterling made no mistake.

Further quality play followed via João Cancelo, instructed by Guardiola to drift inside from right-back. He recycled the ball to Mahrez and suddenly he was in, his shot forcing another corner. Yet when City had to defend they were unconvincing. An Arsenal corner was hit in by Willian from the left, no light blue shirt rose to head away, and Ederson beat the ball from under his bar.

The Brazilian was just as brilliant when Tierney outmuscled Silva, Bukayo Saka swapped passes with Pierre-Emerick Aubameyang, and the No 7’s attempt was parried away by Ederson. “He was incredible for us,” said Guardiola of the keeper.

Before half-time a high Kyle Walker challenge on Gabriel in the area had Arsenal calling for a penalty. Chris Kavanagh, the referee, was not interested, which left Arteta unhappy.

“That has to be checked [by VAR]. They said that they checked, and I asked: ‘How the hell have you checked if you took two seconds to check that action?’” said the Gunners’s manager.

Guardiola played down an incident in which Agüero placed his hand on the neck of Sian Massey-Ellis, the referee’s assistant, on 42 minutes. “Come on,” he said. “Sergio is one of the nicest guys.”

In the second half Sterling was to the fore, his effervescence having him scampering through Arsenal’s midfield and then passing to Foden, whose delivery was overhit – though a less rusty Agüero might have killed the ball rather than see it spin away.

Arsenal’s hunger was illustrated when Aubameyang charged down an Ederson clearance. Yet more of that was required to disrupt a City side who were again hogging the ball. This meant that in a stadium already empty, tempo and atmosphere dipped. When Agüero was replaced on 65 minutes – by Ilkay Gündogan – the No 10 riffed on this, offering a jesting faux-handclap of appreciation to the missing crowd for the nonexistent appreciation of his effort.

A David Luiz 20-yard free-kick that sailed off target was as close as Arsenal threatened to an equaliser as the closing phase approached. From this juncture City looked to high-press whenever possible, Cancelo, Foden and Silva leading the charge.

When Walker conceded a free-kick 20 yards out, this time Pépé stepped up. But his left-foot effort went wide of Ederson’s right-hand post. It did, though, signal an anxious last few minutes for Guardiola and his players.