DW (English)
Share on FacebookShare Share on TwitterTweet
Bayern Munich’s Champions League final hero Kingsley Coman was in inspired form again as the defending champions crushed Atletico Madrid. It was another ruthless display of attacking and a statement of intent by Bayern.

There was a sense of deja-vu about Joshua Kimmich’s killer pass and Kingsley Coman’s clinical finish. Just as they combined in Lisbon to clinch Europe’s top prize in August, they did the same to open Bayern’s title defense. That set the tone for another relentless performance by this phenomenal team.

The only surprise was that Robert Lewandowski wasn’t in the goals. He seemed to mourn his own perfectly fine performance when he was substituted with ten minutes to go without a goal to his name. For once, the Pole played a supporting role as Coman proved the man with ice in his veins.

The 60 days since Bayern beat Paris Saint-Germain have passed in the blink of an eye. That’s quite possibly a blessing for Bayern, who have taken their outrageous form from one season straight into the next with barely time to take stock of their rise.

Atletico Madrid, who reached the last eight last season before being halted by RB Leipzig, were extremely disappointing in Munich. The intensity and aggression associated with Diego Simeone’s sides was severely lacking, and Bayern out-fought and out-thought them all over the field. 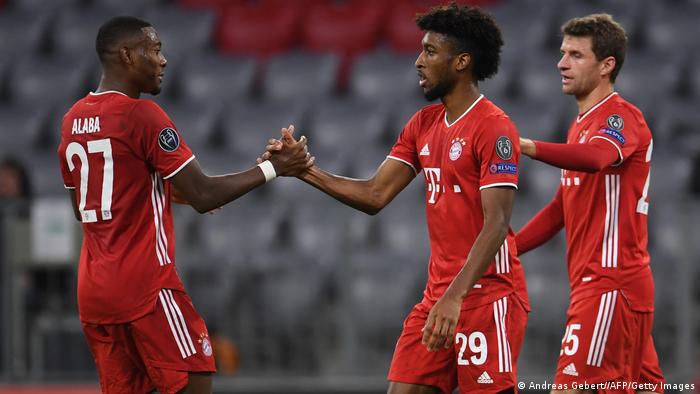 Coman, center, is congratulated after a virtuoso performance.

Coman was the star man, at least on paper. His opener was well-taken and his second — Bayern’s fourth — was a goal of the highest quality. He turned Felipe inside out before arrowing a fine shot into the bottom corner, and found the time to lay on an assist for Leon Goretzka too.

However, it was all made possible by the brilliance of Joshua Kimmich. Granted, Atletico gave him the time and space in which to operate, but the Germany midfielder’s vision, strength and sheer drive pushes this Bayern team on. He not only oozed class and quality in central midfield, controlling the game for long periods, but also energized his teammates with his winning attitude. He has quietly become one of the very best midfielders in the world, and seems to get better each week.

In the absence of Serge Gnabry, who tested positive for COVID-19 on Tuesday, Corentin Tolisso was given a start and he repaid Hansi Flick’s faith with Bayern’s third goal, which could prove to be the best he’ll ever score; a pile-driver from 30 meters that gave Jan Oblak, one of the world’s finest goalkeepers, no chance.

All in all, it was a champions' performance and Bayern's 17th straight win in the group stages of the Champions League. Flick has won nine from nine in the competition, with an astounding record of 34 goals scored and just four conceded. Once again, it will take a very special team to stop them.

90'+2 FT Bayern Munich 4-0 Atletico Madrid — It's all over in Munich and Bayern are convincing winners. Atletico simply couldn't live with the reigning champions tonight.

90' Torreira is into the book for his customary yellow card, catching Tolisso very late.

86' Correa wins a cheap free-kick for Atletico, but Felix's effort is tame.

83' Bayern treating this like a friendly now, with all these changes.

80' Atletico know they're beaten here, which is wise because Bayern look in the mood to score more tonight.

72' GOAL! Bayern Munich 4-0 Atletico Madrid — Coman again! It's another top class finish by Bayern and Coman inflicts the damage again. Racing clear he cuts back and shapes to shoot with his left, only to twist Felipe inside out and finish expertly into the bottom corner. Stunning goal.

66' GOAL! Bayern Munich 3-0 Atletico Madrid — Tolisso with a worldy! Corentin Tolisso has just scored the best goal of his career. Kimmich's shot is blocked and the ball drops invitingly for Tolisso, whose first-time rising drive from 30 meters absolutely flies past Oblak. World class. 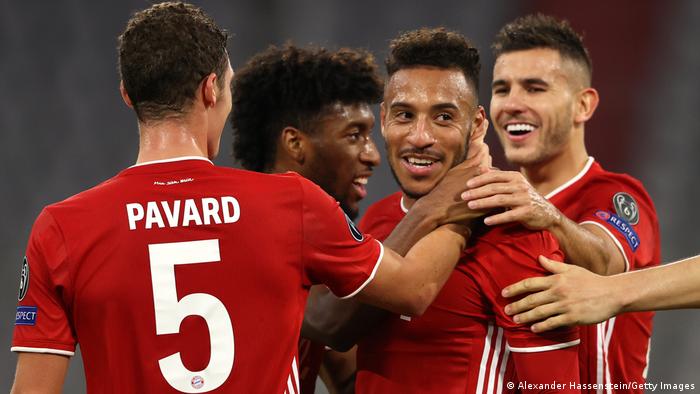 62' Bayern applying a little more pressure at the moment. They know the third would kill off Atletico's lingering hopes.

60' Müller almost scores after Pavard nods the ball into his path but his volley has to be executed quickly under pressure, and he slices it just wide.

56' Chance for Bayern as Lewandowski gets the ball on the edge of the Atletico box. He initially shapes to shoot but instead opts to lift the ball towards Coman, but there was just a bit too much on it and the Frenchman is unable to bring it down.

52' Atletico have more bite about them in this second half. They're pressing harder and look like the Atletico Madrid we know. Is the damage already done though?

48' Atletico have a goal disallowed. Felix's half-volley flies into the back of the net, but is ruled out as Suarez is in Neuer's line of sight in an offside position. Atletico's celebrations are cut short after VAR rules in Bayern's favor.

45' HT Bayern Munich 2-0 Atletico Madrid — Bayern in control after goals from Coman and Goretzka. Atletico have had a couple of chances, but they've been timid in fron of goal and made it comfortable for the defending champions.

41' Bayern Munich 2-0 Atletico Madrid — Goretzka scores! Coman turns provider, digging out a cross for Goretzka, who takes a touch and slams a pure shot into the bottom corner.

35' Half-hearted shouts for a penalty as Lewandowksi goes down in the box, but it would have been very soft.

32' Kimmich is dictating play out there at the moment. Atletico giving him far too much time and the Bayern midfielder is able to control things.

28' GOAL! Bayern Munich 1-0 Atletico Madrid — Coman scores! The man who scored the final Champions League goal of Bayern's campaign last season has scored the first of this. And the assist is from Kimmich too, with a sublime drilled ball to the Frenchman, who takes a touch and finishes neatly into the opposite bottom corner. 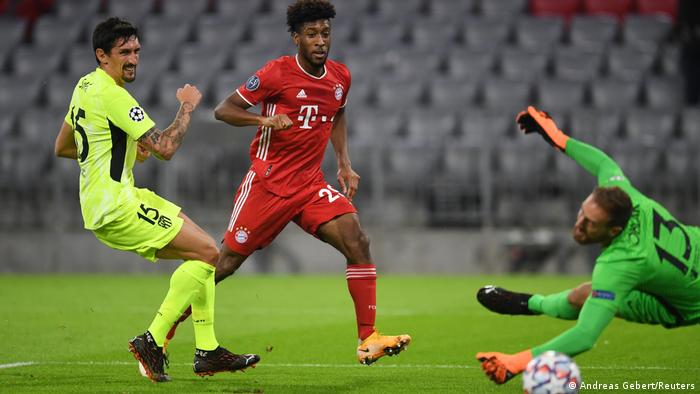 Coman slots the ball past Jan Oblak for Bayern's opener.

27' Another opening for Atletico and Suarez, but he skews his shot and that's a let-off for Bayern.

23' Nice move by Atletico as Felix neatly slots the ball into the path of Carrasco, but his shot is just a bit too close to Neuer, who yells at his defense for allowing the chance to materialize.

20' Thomas Müller is incandescent with rage. He's been yellow carded for a foul on Trippier and he's absolutely right to be enraged. Never a foul. "Is this football or what?" he yells. 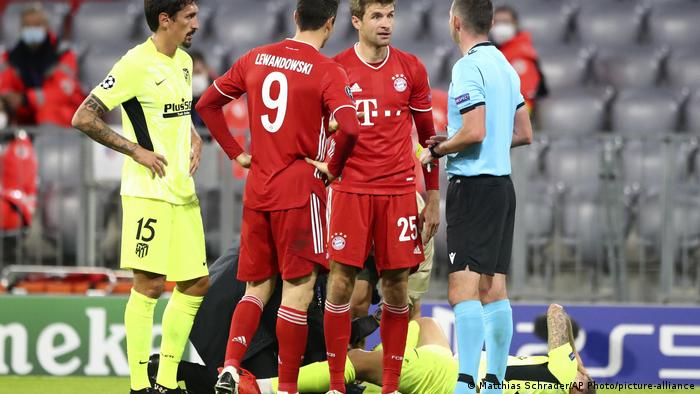 Thomas Müller disputes a ridiculous decision to book him.

15' Big miss by Süle! How on earth has Süle missed that? The corner comes in from the right and Süle is almost shocked that the ball comes to him, and he swings his left foot at it but it comes back off the post.

13' A fleeting chance for Atletico on the counter attack but Suarez can't thread the pass through a gap in the Bayern defense.

10' Pavard angles a low cross towards Lewandowski, but Felipe is at the near post to clear.

6' First chance for Bayern Munich and it falls to Robert Lewandowski, of course. Good work by Coman down the left flank and a good cross, which Lewandowksi tries to volley in. It was a difficult one, which goes just over.

2' Just 60 days on from their Champions League final triumph in Lisbon, Bayern Munich's title defense begins here. And it's against an Atletico team that reached the last eight last time.

Bayern's team is out and Hansi Flick has resisted the urge to throw Douglas Costa into the team for his first Champions League start since returning to the club. Instead, Corentin Tolisso comes in, presumably with Leon Goretzka pushing further forward. Once again, Alphonso Davies is on the bench.

Joao Felix partners Luis Suarez in attack for Atletico Madrid, who otherwise line up as expected. Diego Costa misses out through injury.

A UEFA spokesperson has confirmed that this evening's match between Bayern and Atletico will go ahead as planned. The fixture had been cast in doubt after Germany winger Serge Gnabry tested positive for COVID-19 on Tuesday.

The UEFA spokesperson provided no further details, but all of Bayern's players were tested for the virus again on Wednesday morning. Under UEFA coronavirus protocols, Bayern had until six hours prior to kick off to present negative tests for all of the players involved in the match. The match would have been called off if fewer than 13 players, including a goalkeeper, had tested negative for the virus.

Bayern and Atletico have met on four previous occasions, with all four games coming in the 2015-16 Champions League campaign. During the group stage, both sides won 1-0 win on home soil. The semifinal clash followed the same pattern, but away goals decided the tie with Atletico scoring in Munich.

Hansi Flick's side made history in 2019-20, winning every game en route to claiming their sixth European Cup – the first team to lift the trophy with a perfect record. The defeat of Paris Saint-Germain was Bayern's 11th straight UEFA Champions League success, setting a new record.

Last season, Lewandowski finished as the top scorer in the Champions League with 15 goals, two shy of Cristiano Ronaldo's competition record of 17 for Real Madrid in 2013-14. The Pole has already started this season in prolific form with nine goals in eight games for club and country.

The Uruguayan may experience unwanted flashbacks when he faces Bayern after being part of the Barcelona side that suffered the ignominy of an 8-2 loss during the Champions League finals tournament in Lisbon. Now on the books at Atletico, he can at least be confident in not conceding as often.

Bayern became only the seventh team to win all six games in the group stage last season, recording big wins at Tottenham (7-2) – in which Serge Gnabry scored four goals – and Red Star (6-0) – in which Robert Lewandowski scored the fastest quadruple in Champions League history at 16 minutes.