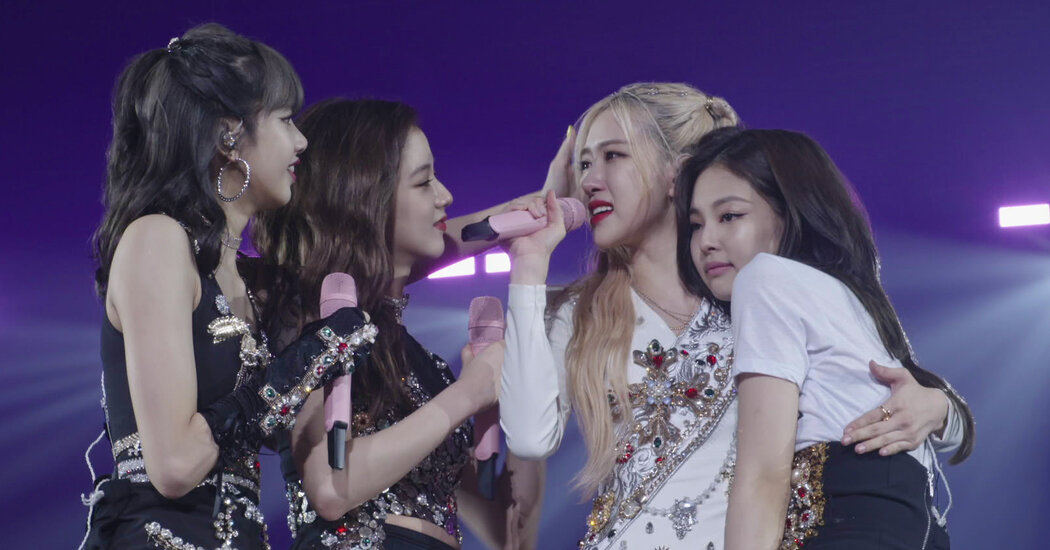 Four young superstars shine brightly in “Blackpink: Light Up the Sky,” a brief but endearing introduction to the idolized K-pop girl group. The documentary (on Netflix) arrives just under two weeks after the release of Blackpink’s debut album, and while its salute to the artists flicks at the cynical side of their industry, it is less a probing profile than a backstage pass for fans of the band (a.k.a. Blinks) old and new.

The director, Caroline Suh, combines naturalistic, on-the-go footage of the group with separate interviews with its members: Jisoo, Jennie, Lisa and Rosé. They are an international ensemble — Jisoo and Jennie were born and raised in South Korea, Lisa is Thai and Rosé is from New Zealand — and as Suh traces each of their young lives, she allows their singular personalities and styles to come into focus.

This emphasis on individuality is especially valuable when set against a music business notorious for pruning its artists into a glossy commodity. Suh opens the documentary in 2016, on the day that YG Entertainment, the South Korean music monolith, debuted Blackpink at a news conference. Reporters type furiously as they behold the nervous girls who had striven for this moment since YG recruited them to its intensive, live-in pop conservatory years earlier.

Alongside clips of their recitals, the girls allude to the rigor of their training: long hours, harsh criticisms, a competitive atmosphere. Jennie laments leaving home so young; Rosé diplomatically says the era “wasn’t a very happy vibe.” In its best moments, the documentary draws a line from the challenging lives Blackpink led as trainees to the pressure and loneliness they now face as global celebrities, forced to make besties with their makeup artist or private Pilates instructor.

It’s a shame that these complicating moments are few, and “Blackpink: Light Up the Sky” declines to dig deeper into the ways YG engineers and commercializes talent at such a young age. Here is an economy in which companies make millions by working kids to the bone. Skimming the topic is a missed opportunity, but the film’s winsome stars are its saving grace.

Blackpink: Light Up the SkyNot rated. In Korean and English, with subtitles. Running time: 1 hour 19 minutes. Watch on Netflix.