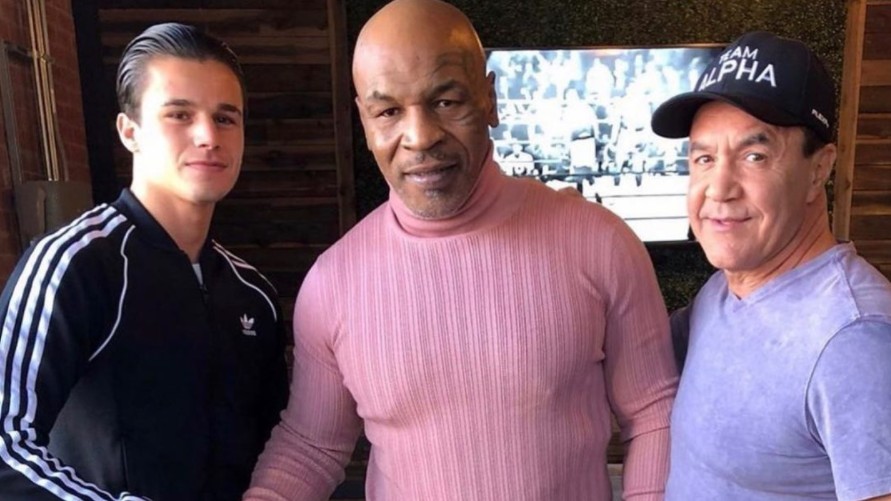 Iron Mike’s Instagram feed is filled with posts about his podcast, goods he’s spruiking, training footage and the occasional throwback.

So it’s a mark of how highly regarded Brock Jarvis is that Tyson dedicated a post to his combined 22 million followers on Instagram and Facebook, wishing the 23-year-old Sydneysider luck ahead of his fight with Mark Schleibs on Friday.

Just hours ahead of Jarvis’ showdown with the previously undefeated Schleibs, Tyson wrote "Wishing my friend and champion Jeff Fenech fighter Brock Jarvis a victory on his fight tonight in Australia."

With the toughest test of his professional career looming, Jarvis had turned his phone off earlier in the day, but was told about the post by his girlfriend Kayla.

Safe to say his notifications went wild when he switched the phone back on after scoring a dominant fifth-round knockout win.

“It was crazy – especially on the day of the fight,” Jarvis told Sporting News.

“I had my phone off, but Kayla told me about it. I didn’t really believe it at first, but it was pretty awesome.”

Just knowing Tyson had taken the time to wish him well provided a boost unlike any Jarvis had experienced before.

“To have something like that happen on the day of the fight, it’s pretty special,” he said.

“It really lifted me up and gave me some extra motivation for sure. He doesn’t do that a lot so it was awesome.”

Tyson’s friendship with Fenech dates back to the early ‘90s.

The Marrickville Mauler’s controversial draw with Azumah Nelson was on the undercard to Tyson’s second fight with Donovan Ruddock in Las Vegas. The pair hit it off that week, before Fenech later trained Tyson in the latter part of Iron Mike’s career.

Fenech had planned on teaming up with Tyson again when rumours of the former heavyweight champion’s comeback began circling earlier in the year. Coronavirus ruined that idea, but Tyson’s social media post shows their relationship is still strong.

“Mike’s my great friend and just for him to put that up on the day of the fight meant the world, not only to Brock but to me as well,” Fenech told Sporting News.

Jarvis and Fenech had dinner with Tyson earlier this year, and the experience made a lasting impression on Jarvis.

“He was talking to me about all sorts of stuff – fighting and life as well. He was just a really humble guy. It was pretty amazing just to meet him then.”

Jarvis estimates he gained a few thousand new followers on Instagram since Tyson’s shout-out. His performance against Schleibs would've helped too.

The win was punctuated by a devastating left hook to the body in the fifth round after a performance styled on the furious infighting of Fenech’s own heyday.

If he keeps putting on those kinds of fights, Tyson won't be the only superstar jumping on the bandwagon.