By Matt Barlow for the Daily Mail

Sometimes there is no substitute for a quality substitute, and with five at his disposal in the Carabao Cup, Thomas Tuchel was able to conjure his own creative solution to Chelsea's selection problems.

Tuchel started three teenage debutants, kept Brentford at bay thanks to a mixture of poor finishing and the brilliance of Kepa Arrizabalaga and won it with his stars from the bench in the second half.

N'Golo Kante and Reece James came on and combined to force the opener, sliced into his own goal by Pontus Jansson, in the 80th minute, before Chelsea added a second with a penalty won by Christian Pulisic and converted by Jorginho, both introduced at half time. 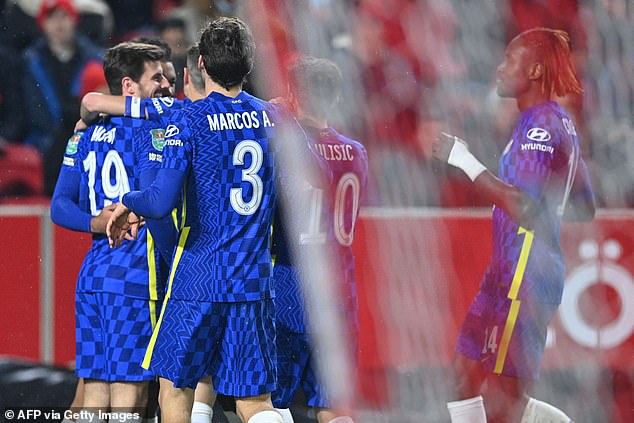 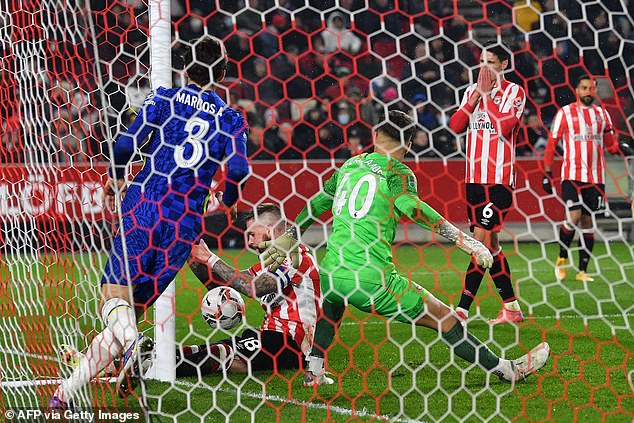 'Very disciplined, very structured and within that structure a lot of quality,' purred Tuchel, whose reward is a date with Tottenham in the last four, his third semi-final in less than a year at Stamford Bridge.

'We deserve to be there, we wanted to be there. I am happy with the result and it was a brilliant performance given the circumstances and the line-up. Some were youngsters, and others leading the youngsters do not have many minutes, and in a place where it is tough to play, emotional normally.'

Brentford boss had Thomas Frank wished for a 'little Christmas miracle' but was left to rue a missed opportunity.

There have been some raucous nights of celebration at their new stadium this season and there may be more as they return to their first season in the Premier League, but this one will go down as an anti-climax.

'I wanted to win this game badly,' said Frank. 'I went as strong as I could with the team and made the subs to make it stronger. We are very disappointed. We missed an opportunity against a top-fside.

'They are the European champions, third in the Premier League and they have world-class players. 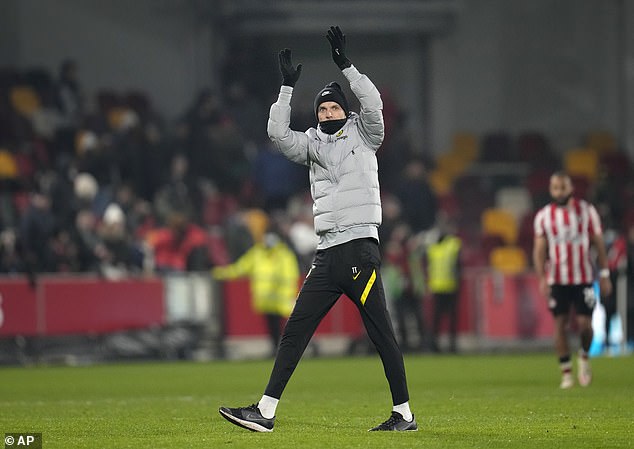 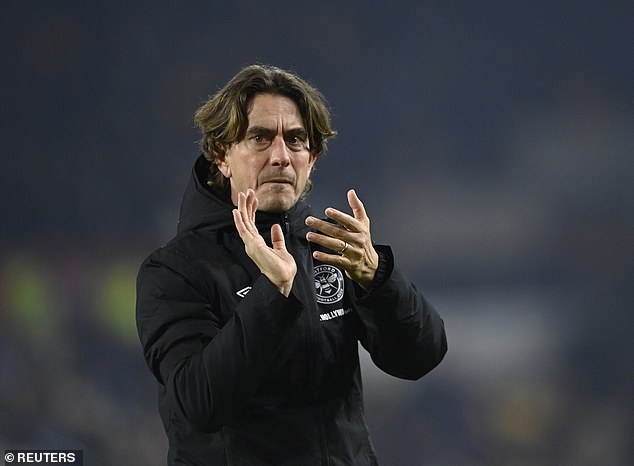 'Look at the team they finished the game with and probably 14 managers who would be very, very pleased with that team. More maybe. That's the difference. They created nothing. Two minor mistakes gave them the goals.'

Brentford were playing for the first time in almost a fortnight after two Covid-related postponements and seemed suppressed by expectations, which crept up from the moment Chelsea revealed their young team.

Jude Soonsup-Bell, Harvey Vale and Xavier Simons completed a half century of academy graduates to have represented the club in the Roman Abramovich era. Soonsup-Bell and Vale were born this side of the Abramovich takeover in the summer of 2003.

Frank's team sat deep and sought to spring out on the turnover of possession, and still created three excellent chances in the first half.

Rico Henry and Bryan Mbeumo combined on the left and Mbeumo picked out Yoane Wissa, who was unmarked in front of goal. There was no flag despite a hint of offside and Wissa ought to have scored. His header lacked the power to beat Kepa, who pushed it away. 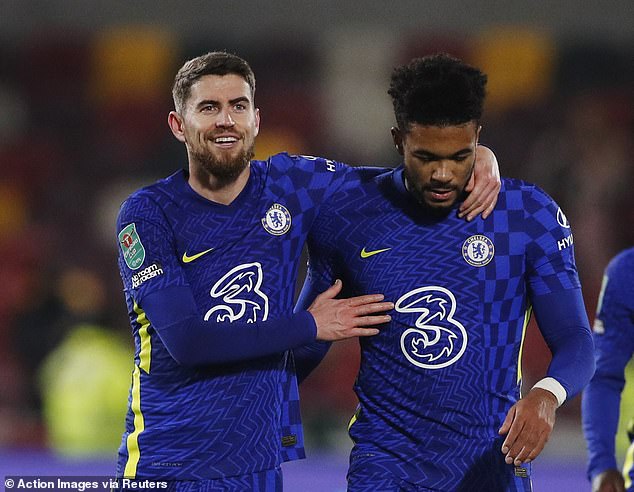 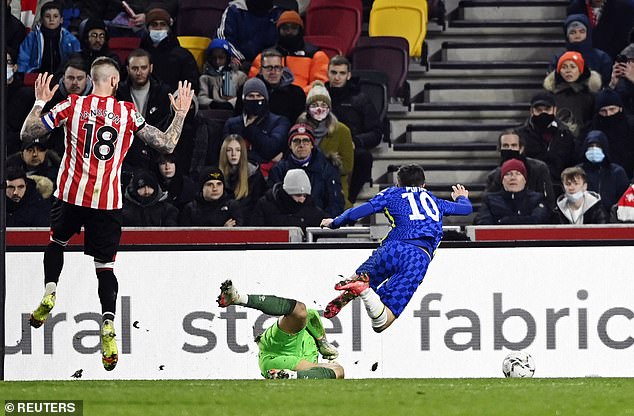 Brentford opened Chelsea up again in similar fashion. Henry clipped the ball over from the left and midfielder Mathias Jensen arrived into space at the back post. His header forced another save from the Chelsea goalkeeper.

Kepa made another important save before the half-time interval, closing down the angle and making a block from Henry. 'He was a big factor,' said Tuchel when asked about his goalkeeper, set for more games when Edouard Mendy goes to the Africa Cup of Nations next month.

In the first half, Chelsea enjoyed plenty of midfield possession with little intensity and without troubling goalkeeper Alvaro Fernandez. Ross Barkley sent a volley skidding well wide from a cross by Soonsup-Bell, and Cesar Azpilicueta fired over from distance. 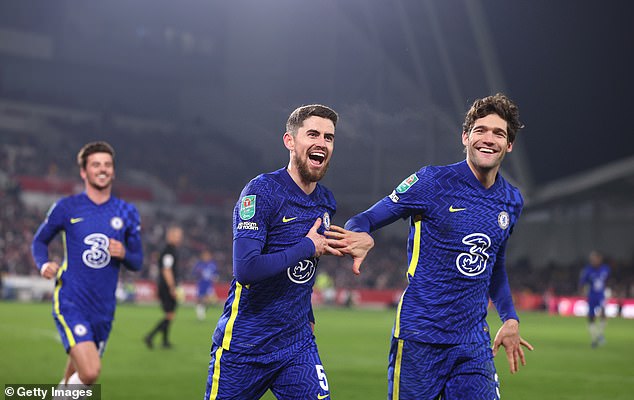 Simons drew a save from Fernandez with a low drive sent flashing across the surface from 25 yards before their best chance of the first half fell to Vale, who slipped away from his marker to meet a cross from Azpilicueta but was unable to guide his header past the 'keeper.

Chelsea improved in the second half with Jorginho at the heart of things. Fernandez made a scrambling save to prevent an own goal from Henry and twice from Barkley. Brentford packed in tightly around their penalty area to absorb the pressure but Tuchel kept sending on the stars.

James made an instant impact with a swerving free-kick, punched away by Fernandez and collected by Barkley, who took aim once again. This time, his shot was closed down by Ethan Pinnock and diverted wide.

With penalties looming, Kante released James on the right and his low cross crashed into one of Jansson's shins and into the top corner. The second followed from the spot, when Pulisic was toppled by Fernandez and Jorginho scored his seventh penalty of the season.