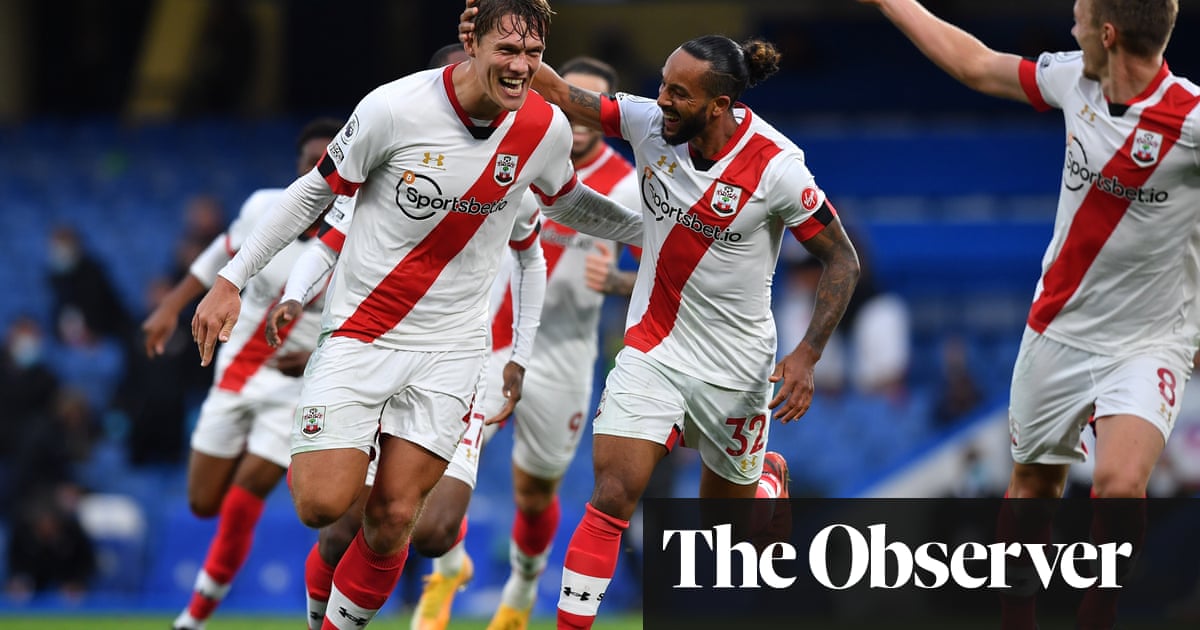 The problem for Frank Lampard is simple to identify: place his defence under enough pressure and it will crack in the end. For all the money lavished on their attack, there is still no hiding Chelsea’s flaws at the back. They remain a mess without the ball and, until there is an improvement, the worry for Lampard must be that all the good work from Timo Werner and Kai Havertz at the other end will go to waste.

This was a farce. An occasion that should have been remembered for Werner and Havertz scoring their first goals in the Premier League somehow finished with Chelsea getting themselves into an awful tangle and Southampton pressing for a dramatic winner after hauling themselves level through Jannik Vestergaard’s equaliser deep into stoppage time.

Five more minutes and Southampton probably would have scored a fourth. Chelsea, who had led 2-0 after 28 minutes thanks to a couple of cracking strikes from Werner, completely lost control during a torrid second half. Their game management was awful, there was no protection from N’Golo Kanté and Jorginho in midfield and nerves flared whenever Southampton pressed against Lampard’s shaky back four, where a centre-back partnership of Kurt Zouma and Andreas Christensen offered nothing in the way of leadership.

Lampard pointed to individual mistakes. Havertz was at fault when Danny Ings dragged Southampton back into the contest on the stroke of half-time and a dismal error from Zouma led to Che Adams making it 2-2 in the 57th minute. Kepa Arrizabalaga, back in goal after Édouard Mendy suffered a thigh injury in the international break, compounded matters with a hesitant challenge on Adams, leaving the Southampton forward to bundle the ball into the empty net.

“We played some great football,” Lampard said, unable to hide his disappointment. Chelsea’s manager was right. His team were outstanding during the first half, offering the first signs of what Lampard wants from his expensively assembled attack. The one-touch interchanges were full of conviction and there were signs of new relationships forming as Havertz found space in the No 10 role, combining with Mason Mount, whose darts inside from the left made room for Ben Chilwell to attack from full-back.

The same combination clicked for Chelsea’s opener, although in reality it was all Werner’s work. Taking a pass from Chilwell, the German produced a moment of outrageous impudence, nutmegging Jan Bednarek without even touching the ball. The dummy left Bednarek grasping at thin air and the Southampton centre-back was unable to react as Werner raced away before slamming a shot past McCarthy.

“Too easy!” Hasenhüttll cried, disgusted to concede to the forward he took to RB Leipzig in 2016. Worse was to follow. Jorginho swept a glorious ball over the top and Werner lobbed McCarthy before nodding into the empty net.

Yet Southampton refused to lie down. With Thiago Silva rested before Chelsea face Sevilla in the Champions League on Tuesday, the visitors created opportunities. They had threatened before Ings punished an error from Havertz, rounding Arrizabalaga before tapping home.

Southampton dominated the second half and Chelsea’s loss of composure was summed up by Zouma’s failure to deal with a routine punt in the 57th minute. The centre-back’s woeful back pass let Adams in and, with Arrizabalaga slow off his line, the striker eventually slammed the ball into the roof of the net. “A situation we should have dealt with,” Lampard said. “If you’re going to concede those goals it doesn’t matter how you play.”

Chelsea quelled the rebellion two minutes later. Christian Pulisic, starting for the first time this season after recovering from a hamstring injury, dodged a couple of challenges on the right and released Werner, who teed up Havertz for an easy finish.

Panic over? Not quite. Chelsea brought on Hakim Ziyech for his debut but Southampton remained lively in the final third. Arrizabalaga saved from Ings. Adams went close and the pressure told when Theo Walcott, back in Southampton colours after his loan move from Everton, saw his shot headed in by Vestergaard after Chelsea failed to clear a free-kick.