INSIDER
Share on FacebookShare Share on TwitterTweet
Jake Paul insulted Conor McGregor's fiancee, his next opponent, and UFC promoter Dana White in a shocking 58-second video which you can watch here. 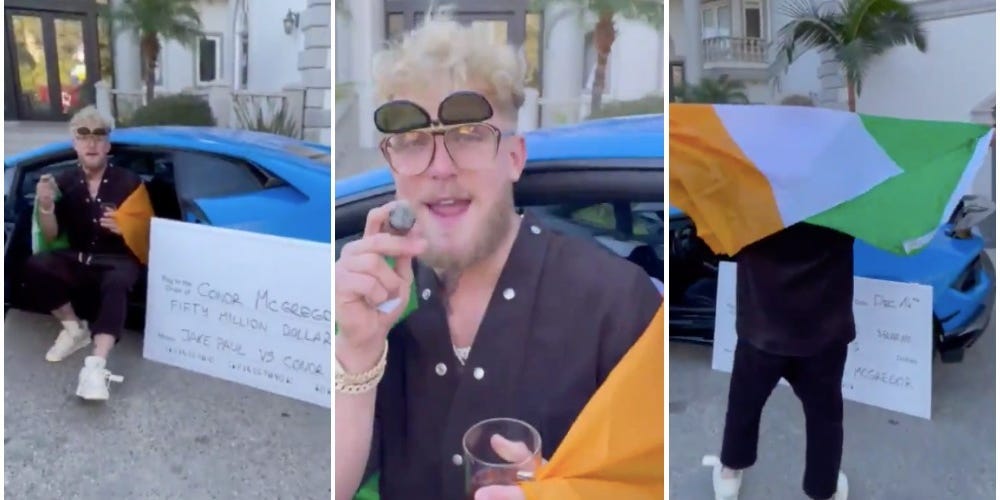 Jake Paul has publicly issued a $50 million offer to entice Conor McGregor back into a boxing ring.

The YouTube creator dropped a 58-second video Monday in which he insulted McGregor's fiancée Dee Devlin, his next opponent Dustin Poirier, and his UFC promoter Dana White.

Perched on the edge of his $350,000 Lamborghini Huracan Performante, Paul began his expletive-laden video by saying: "What the f--- is up, you Irish c---?"

Smoking a cigar with an Irish flag wrapped around his shoulders, Paul added: "Good morning Conor McGregor. I know you're probably beating up old dudes in a bar right now, or maybe you're j------ off because you're sick of f------ your wife. I mean, she is a four, Conor, you can do a lot better, but happy Monday.

He then referenced the success of the pay-per-view event he recently competed on, brutally knocking out the former NBA player Nate Robinson in the second round of the Mike Tyson and Roy Jones Jr. exhibition.

Paul's video follows comments to Insider last month in which he said he was in combat sports to stay, intended to entice MMA fighters into the boxing ring for crossover fights, and wanted, above all, a big bout against McGregor.

"I'm bigger than Conor, I weigh more than Conor, and he's out of his prime, sort of washed-up," Paul told us at the time.

"But me and Conor would be a more even fight. And when the fight happens, everyone will read this back and say, 'Damn, that kid's out of his mind, but he called this. Predicted this.'"

The alleged bout offer to McGregor is for a boxing rules contest which would take place over eight, three-minute rounds, according to a statement on Paul's Instagram account.

It would take place at a catchweight limit of 185-pounds (which is 30-pounds heavier than McGregor's fight with Poirier next month), and they'd be permitted to use 10-ounce boxing gloves.

The statement said Paul has "acquired backing for this event [and that backer] is willing to guarantee a purse of $50 million for McGregor to participate."

McGregor would also receive an upside from pay-per-view sales from the event.

The Irishman is yet to respond.

We've officially entered a golden era of showbiz boxing, and it's all down to Mike Tyson, Jake Paul, and Floyd Mayweather

Jake Paul, a YouTube star who has fought once, is confident he can defeat 'washed-up' Conor McGregor, a former two-weight UFC champion

Claressa Shields could master MMA at a 'rapid rate' as she's already got the mind of a warrior, PFL stablemate Clay Collard says