NEWS.com.au
Share on FacebookShare Share on TwitterTweet
It’s another tough morning for Aussie crypto investors who are waking up to see their wallets shrinking at an alarming rate. 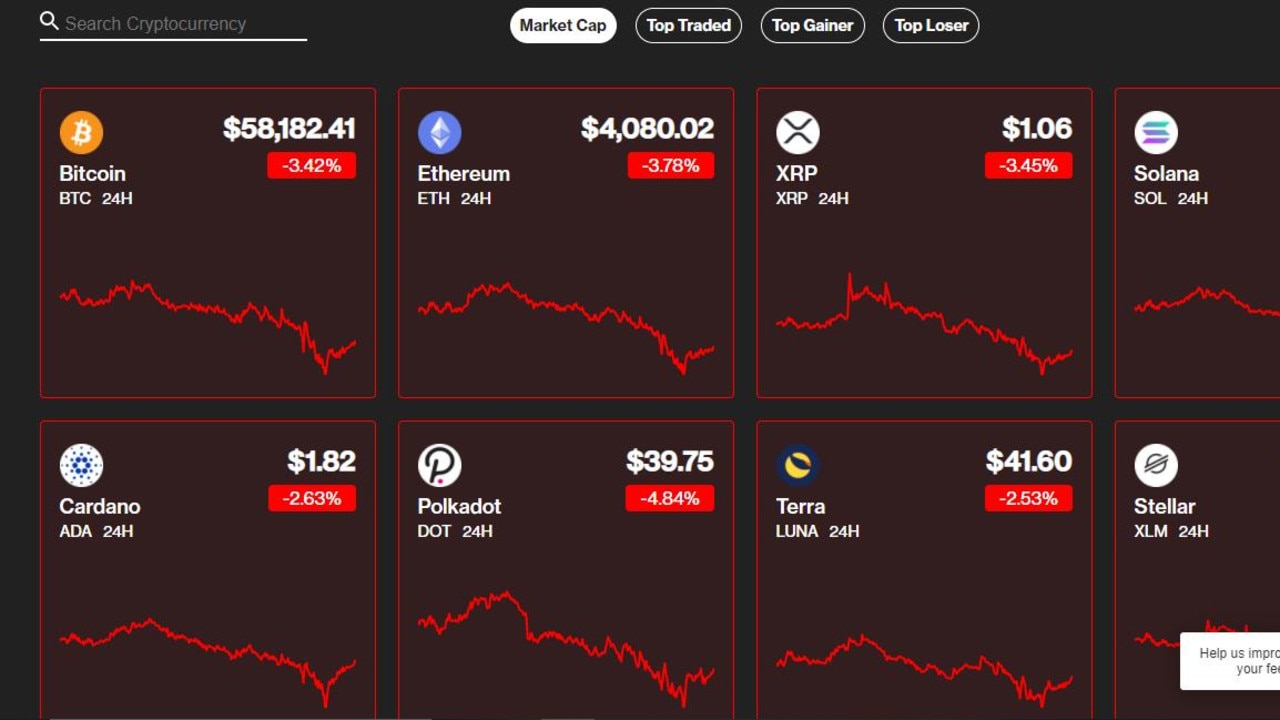 It’s been another horror night for crypto investors in a punishing week for the digital tokens. Now Bitcoin is headed towards a dreaded threshold.

It’s another tough morning for Aussie crypto investors who are waking up to see their wallets shrinking at an alarming rate.

After an already torrid week, Bitcoin prices fell to their lowest in more than a month overnight — suffering this decline at a time when technical indicators are showing that the digital currency could be heading for even further losses.

The largest cryptocurrency by market value dropped to as little as $56,668.50 today, CoinDesk data shows, meaning it had lost almost 18 per cent of its value after hitting an all-time high of nearly $69,000 earlier this month.

Other prominent coins have suffered considerable loss overnight too amid a broad sell-off in cryptocurrency markets.

The CoinDesk top 20-listed digital assets are all trading in the red. Ether, the native cryptocurrency of the Ethereum blockchain and the second-largest overall, was down 4.2 per cent over the past 24 hours, slipping below the key psychological level of $4000 earlier in the night — XRP was down 3.47 per cent while Solana was down 6.27 per cent.

It comes as the The Reserve Bank of Australia has warned crypto investors they risk holding speculative assets with “niche” uses that could lose most of their value.

The RBA’s head of payments, Tony Richards, said the value of many cryptocurrencies, which have surged to $US2.6 trillion, had been driven by “fads and a fear of missing out” and could crash when central banks decide to assert control over their monetary systems.

“I think there are plausible scenarios where a range of factors could come together to significantly challenge the current fervour for cryptocurrencies, so that the current speculative demand could begin to reverse, and much of the price increases of recent years could be unwound,” he told the Australian Corporate Treasury Association, according to the AFR.

The crypto market is famously volatile, but some analysts believe this latest dip spells big trouble for the digital currencies.

John Iadeluca, the founder & CEO of multi-strategy fund Banz Capital, said if the digital currency falls below certain support levels, it could be headed for significant losses.

“I believe namely if the price of Bitcoin falls past $50,000 that this would indicate negative cyclic attributes for Bitcoin price,” meaning that it could serve as an early signal that the digital currency is heading for a declining market.

However, Damanick Dantes from CoinDesk says the pullback could be stabilised after falling further in the short-term.

“If further declines materialised, the next level of price support is seen around $53,000, which could then stabilise the pullback, based on a CoinDesk analysis,” he wrote.

“For bitcoin, upside momentum continues to slow on the daily price chart, suggesting continued profit-taking among buyers. And the relative strength index (RSI) on the daily chart is not yet oversold, which provides scope for further downside in BTC over the short-term.

“The 100-day moving average, currently around $53,000, could attract buyers similar to late September, which preceded a price recovery.”

It is not yet clear what is causing the dramatic slide, but there are several factors that appear to be making investors think twice.

These include a fresh crackdown on bitcoin mining in China, the rejection by the US Securities and Exchange Commission (SEC) of a spot bitcoin exchange-traded fund (ETF), and long-term investors selling off to get their cash.

Crypto, however, is notoriously volatile and analysts say it is too early to tell whether the latest dip marks the start of a reversal of the sharply rising market or whether it is just a correction on the way to new all-time highs.