The Hindu
Share on FacebookShare Share on TwitterTweet
Buttler drives 126-run chase after loss of early wickets to lift side to fifth; Dhoni’s men fail to force the pace, especially against the leg-spinners 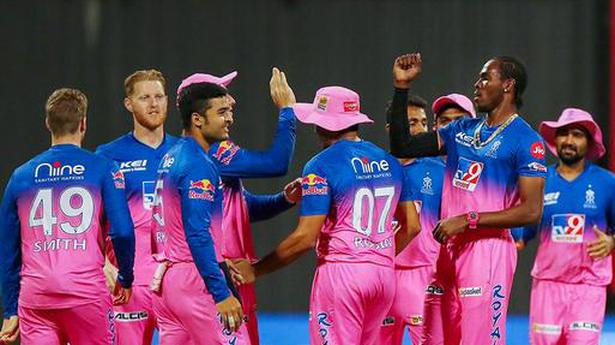 Buttler drives 126-run chase after loss of early wickets to lift side to fifth; Dhoni’s men fail to force the pace, especially against the leg-spinners

Jos Buttler slammed an unbeaten 70 off just 48 balls (7x4, 2x6) to guide Rajasthan Royals to a comprehensive seven-wicket win over Chennai Super Kings at the Sheikh Zayed Stadium in Abu Dhabi on Monday.

Walking in at five, Buttler slowly but steadily took control of the chase and was able to find the boundary when needed while Smith was happy to play second fiddle in their unbeaten 98-run stand for the third wicket.

The Englishman started with a reverse sweep off Ravindra Jadeja before he attacked the CSK medium-pacers with his powerful shots down the ground as he got his eye in.

In the 12th over, Buttler hit Shardul Thakur for a four over point and followed it with a six over long-off to switch gears.

Piyush Chawla faced the fury of Buttler’s willow in the 15th over, going for three consecutive boundaries, the first of which brought up the batsman’s half-century.

CSK relied more on its pacers than spinners, with Chawla being introduced only in the 13th over.

In contrast, the RR bowling effort was led by its leg-spinners Shreyas Gopal and Rahul Tewatia, who stifled the CSK middle-order on a wicket that was on the slower side.

The team appeared to build some momentum when Sam Curran and Ambati Rayudu got 15 runs off Ben Stokes in the fifth over.

However, Shreyas accounted for Curran with a googly, forcing the batsman to chip it to long-off, while Tewatia found Rayudu’s top-edge off an attempted sweep to have him caught by the keeper.

CSK failed to score a boundary from the seventh to the 13th over.

The spinners conceded only 32 runs in eight overs between them and bowled a whopping 23 dot balls.

A Rayudu c Samson b Tewatia 13

K Jadhav not out 4

Steve Smith not out 26

Jos Buttler not out 70