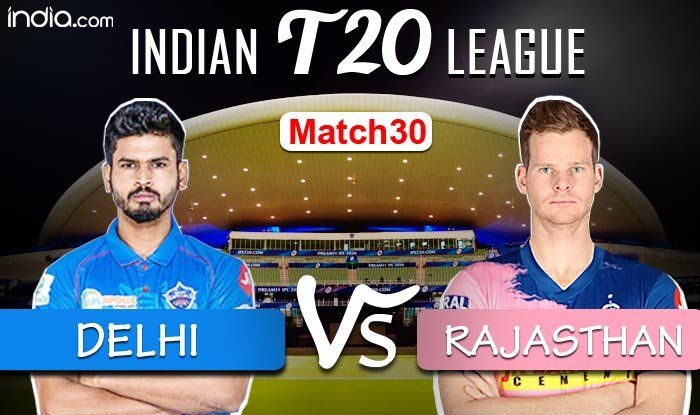 Nortje rises to the occasion!

Anrich Nortje is adjudged Man of the Match for his brilliant bowling figures of 2/33.#Dream11IPL pic.twitter.com/8DFGL5NpzC

DC vs RR Live Cricket Updates IPL 2020 Live Score: For his two crucial wickets at critical junctures, Anrich Nortje has been named the Player of the Match. On whether he knew how fast he bowled today, Nortje says that he has no idea, with a smile. Nortje says that he wanted to stick to his strength rather than trying too much. In the end, it paid off, he says. States that the League has been a fine experience so far. Adds that they have excellent coaching support. Says that Deshpande was bowling really well in the nets early on. Nortje says that he is really enjoying the League experience so far. Adds that he would always like to be in the middle in such things rather than sit on the sidelines and watch.

IPL 2020 Live Cricket Updates DC vs RR 2020: Delhi Capitals skipper, Shreyas Iyer is not fit so Shikhar Dhawan is up for chat as he also marshalled the troops in the absence of their skipper. He says that Shreyas got hurt on his shoulder. Tells his shoulder is moving but they will know the length of the injury tomorrow. Dhawan tells he is glad that they got this game as at one moment it was very even. Dhawan tells they believed that they had a chance and all of them stayed positive. Adds they were aware that their batting is not that experienced and if they got through the top order then it would be their game. Tells their bowling is experienced and credits Nortje for his effort. On Deshpande, he says he played really well and got them the crucial wicket. Tells it was an important win as they wanted to keep the momentum going on especially after losing the game against Mumbai.

Rajasthan have done to themselves what they did Punjab and Hyderabad. They won those two games when defeat looked inevitable but tonight they have shot themselves and lost a game which they were dominating for most of the game. Chasing 162, Buttler and Stokes got them off to a flier before the former departed. Smith too followed suit but Stokes continued his merry way and was cruising along with Samson. The pair were motoring along with the chase before Stokes departed. What followed was some poor batting. Rajasthan lost wickets in a cluster and though Uthappa found some form it was not good enough. The man with the Midas touch, Rahul Tewatia could not weave his magic and Rajasthan just fell off a cliff.

A brilliant win here for the @DelhiCapitals as they beat #RR by 13 runs in Match 30 of #Dream11IPL.#DCvRR pic.twitter.com/jgF35MrnZR

11:23 PM IST
They say batting wins you matches but bowling wins you the championship. If that saying holds true then this might as well be Delhi's year. The team from the capital city have turned the game around and roared their way into the top of the table, courtesy a phenomenal bowling display at the death! Rajasthan will be kicking themselves as they looked on course to win but Delhi have done the double over them this season.">

Dream11 IPL 2020 Live Cricket Updates DC vs RR: They say batting wins you matches but bowling wins you the championship. If that saying holds true then this might as well be Delhi’s year. The team from the capital city have turned the game around and roared their way into the top of the table, courtesy a phenomenal bowling display at the death! Rajasthan will be kicking themselves as they looked on course to win but Delhi have done the double over them this season.

FOUR! Full and well outside off from Tushar Deshpande, Shreyas Gopal throws the kitchen sink at it. Gets a thick outside edge that flies to the third man fence.

IPL 2020 Live Cricket Score and Updates DC vs RR: Excellent save from Rahane at the deep. Just the single. Full and well outside off, Tewatia reaches out and hits it high and mighty towards wide long-off. Rajasthan 141/7 in 19.1 overs vs Delhi (161/7)

DC vs RR Live Cricket Score and Updates IPL 2020: OUT! CAUGHT! Kagiso Rabada removes Jofra Archer 1. Some high-quality death bowling this from Delhi. They have gone to their experienced bowlers – Rabada and Nortje – both have delivered. Full and in the blockhole outside off from Rabada, Archer digs it out, uppishly but straight into the hands of Rahane at point. Rajasthan Royals 139/7 in 18.4 overs, need 23 runs to win vs Delhi Capitals (161/7)