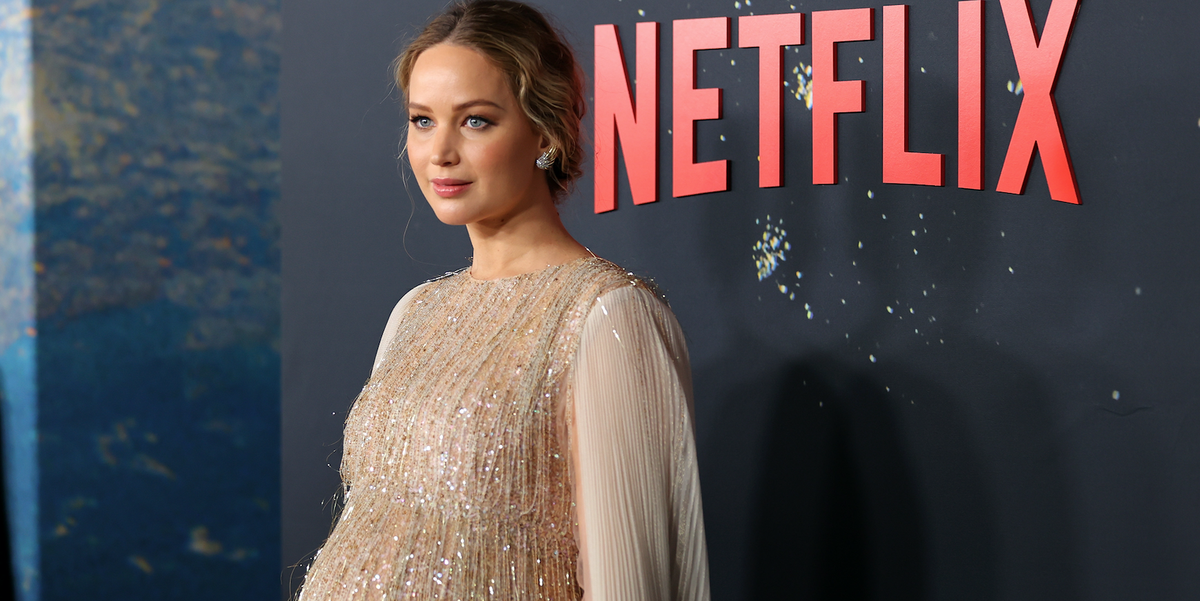 Jennifer Lawrence showed off her growing baby bump over the weekend at the premiere of her upcoming movie, Don't Look Up. Walking the red carpet in New York alongside her costars Leonardo DiCaprio, Meryl Streep and Jonah Hill, all eyes were on the 31-year-old who wore a floor-length, glittery Dior gown with semi-sheer cape sleeves.

The mum-to-be announced she and husband Cooke Maroney were expecting their first child earlier this year, although she's kept details of her pregnancy pretty low-key since then. Last month, at an intimate screening for the Netflix film, she gave fans a glimpse at her baby bump, and later opened up to Vanity Fair about her pregnancy so far.

Despite sharing that she is "grateful and excited" to become a mum, J Law revealed she plans to keep her child's life as private as possible. "If I was at a dinner party, and somebody was like, 'Oh, my God, you're expecting a baby,' I wouldn't be like, 'God, I can't talk about that. Get away from me, you psycho!' But every instinct in my body wants to protect their privacy for the rest of their lives, as much as I can," she explained.

"I don't want anyone to feel welcome into their existence," the Hunger Games star added. "And I feel like that just starts with not including them in this part of my work."

Lawrence herself has avoided the public spotlight as of late too, opening up about her decision to step back from movies for a while. "I was not pumping out the quality [of work] that I should have. I just think everybody had gotten sick of me. I’d gotten sick of me. It had just gotten to a point where I couldn’t do anything right. If I walked a red carpet, it was, 'Why didn’t she run?'" she told Vanity Fair.

"I think that I was people-pleasing for the majority of my life. Working made me feel like nobody could be mad at me: 'Okay, I said yes, we’re doing it. Nobody’s mad.' And then I felt like I reached a point where people were not pleased just by my existence. So that kind of shook me out of thinking that work or your career can bring any kind of peace to your soul," she continued, "I didn't have a life. I thought I should go get one."

This content is created and maintained by a third party, and imported onto this page to help users provide their email addresses. You may be able to find more information about this and similar content at piano.io