Here Are the Electoral College Results, By State

The New York Times
Share on FacebookShare Share on TwitterTweet
See how the 538 members of the Electoral College voted for president. 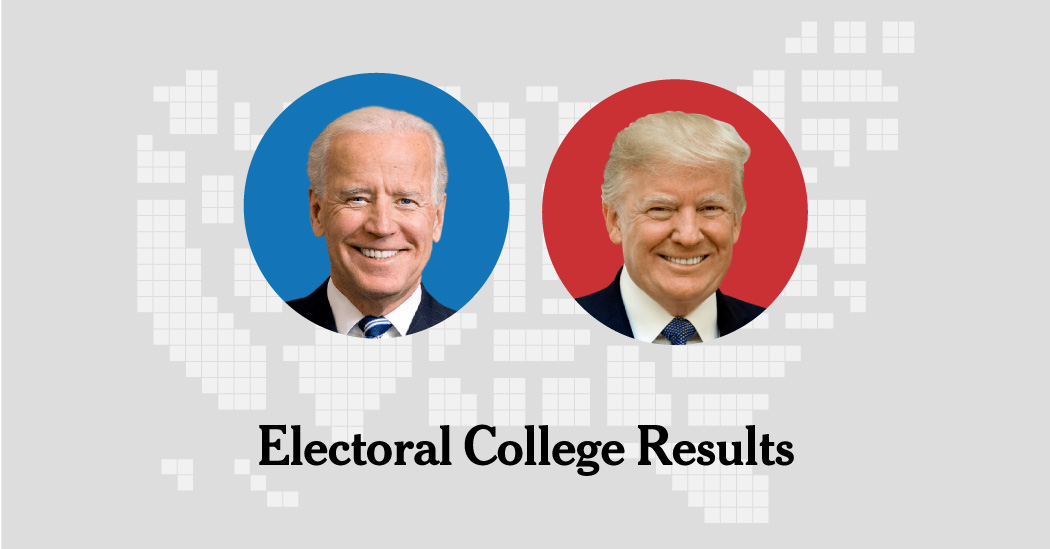 Joseph R. Biden Jr. received a majority of votes from the Electoral College on Monday, formally securing the presidency in the manner set out in the Constitution, some six weeks after Election Day.

California’s 55 electoral votes, announced at 5:27 p.m. Eastern time, put Mr. Biden over the 270-vote threshold for a majority, the culmination of a daylong process that began with Vermont’s three votes shortly after 10 a.m.

Note: Nebraska and Maine allocate some of their electoral votes on the basis of the results in each congressional district.

The normally rubber-stamp formality was followed avidly online in an extraordinary election year, one in which the incumbent, President Trump, refused to concede and incited supporters with baseless claims of a “rigged” vote. For some followers of the counting, it was a kind of replay of election night, but one in which the winner was assured.

Expected protests by Trump supporters outside state capitols, where most electors met, generally fizzled. In Michigan, a group pretending to be “G.O.P. electors” trying to gain admittance to the Senate chamber was turned away by a security guard. Arizona, citing security concerns, did not disclose in advance where its electors would meet.

In general, there were no surprises. Unlike recent presidential elections, there were no “faithless electors” casting a vote for someone other than the winner of their states’ popular votes.

The next important date on the calendar leading to the inauguration of the new president is Jan. 6, when Congress meets in joint session to formally accept the Electoral College results. As in recent presidential elections, it is likely that challenges will be made to some states’ electoral votes, but they are all but certain to fail.

This year, Mr. Biden won states with 306 electoral votes, and President Trump won 232. Despite Mr. Trump’s rage at his loss, his efforts to subvert the outcome have met with resounding defeat in court, and the mechanics of certifying the election results and appointing electors, by both Democratic and Republican officials, have proceeded as designed.

There was sound and fury from the president. But the Electoral College’s ratification of Mr. Biden as the 46th president was routine and anticlimactic.