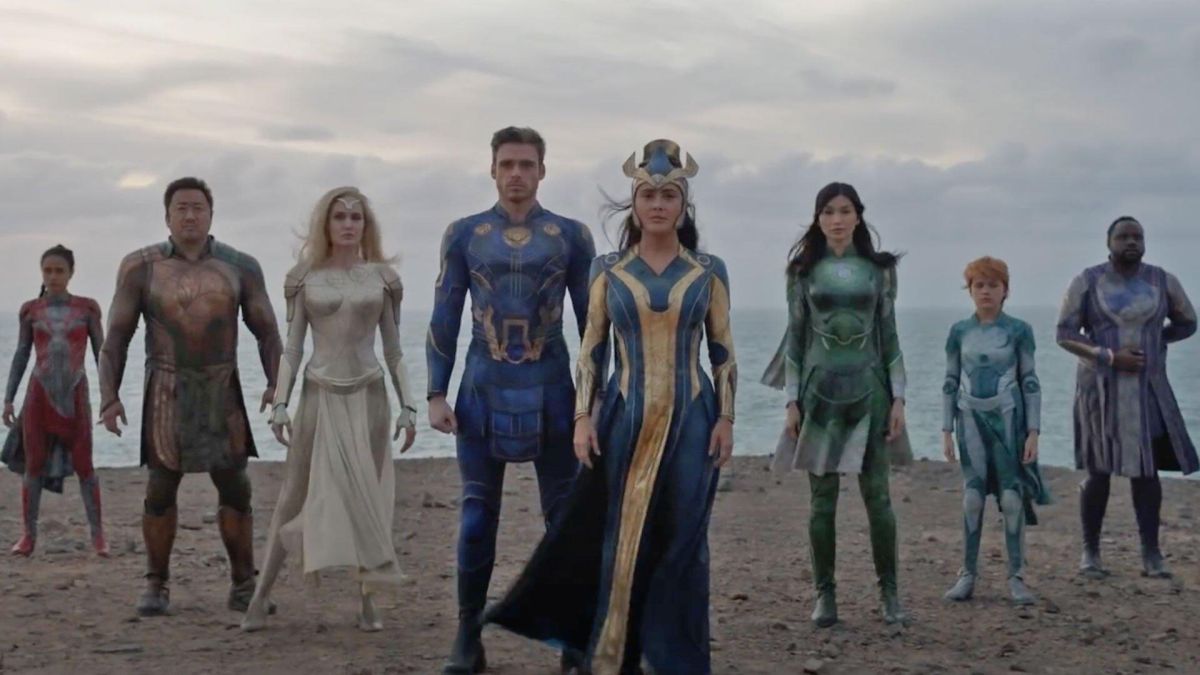 Of all the Marvel movies coming in Phase 4 of the MCU, Marvel's Eternals has been the hardest to nail down. Focused on a group of god-like beings who have lived on Earth in secret for many years, it's hard to watch the trailers and know exactly what their unique selling point is as a superhero group – the marketing is instead leaning into the movie's dazzling ensemble cast, its cosmic-level stakes and director Chloé Zhao's eye for a beautiful shot.

Now, though, the first reactions are in for the film following its world premiere in the US. TechRadar is also seeing the film imminently, and you can expect a full review closer to release – but to tide you over until then, here are some of the first reactions to the film from across social media.

It's worth saying that these reactions are almost always positive, coming out of any Marvel movie, so it's worth waiting until reviews land before making your mind up (just see the positive notices for Ant-Man and the Wasp from 2018, which was clearly a lesser MCU movie). But they do offer more of a hint at the shape of the film, which is described as the "most different" MCU flick, as well as "spectacularly weird".

Let's get started, with a notice calling the film 'massive' but 'down-to-earth' at the same time:

#Eternals is epic in every sense of the word. It's a story that is more massive but simultaneously more down-to-earth than the MCU has ever been. The passion everyone involved had for this movie is present in every scene and it needs to be seen on the biggest screen you can find pic.twitter.com/CyyqPt9dfnOctober 19, 2021

There's praise for the cinematography of Ben Davis, who has previously worked on the Marvel movies Doctor Strange and Captain Marvel.

Rotten Tomatoes' Erik Davis praises the film as "soulful and thoughtful", which aren't the kind of adjectives you usually associate with an MCU blockbuster.

Marvel’s #Eternals is spectacularly weird & rich w/ a new MCU mythology that makes it feel separate from everything else. It’s honestly refreshing. There’s a bittersweetness to the film that you feel in its sunset shots - a definite Chloé Zhao touch. It is soulful & thoughtful pic.twitter.com/pIAFAyhJ4DOctober 19, 2021

It's long been rumored that this film will be enormously important to the MCU's future – and it sounds like the post-credits will be worth sticking around for once again.

Holy crap - Eternals is a freaking MASTERPIECE!!! Packed with adrenaline right from the start, but also filled with lots of heart & humor! So many MCU firsts!! Your mind will be BLOWN! Nods to comics but a totally unique story. Those end credits are GAME CHANGERS!! #Eternals pic.twitter.com/jKiMJukn4SOctober 19, 2021

Expect a movie that defies categorization – THR's Aaron Couch suggests this film is nothing like past MCU efforts, which is self-evident from the trailers released to date.

#Eternals , wow! A lot to unpack. If Marvel movies are a Venn diagram — variations within that overlap — this movie is off the charts. Hands down the most different of any of their films.October 19, 2021

Here's another positive notice for the movie's post-credits sequences, which seemed to drive the premiere audience wild:

Interestingly, a couple of critics compare the movie to DC's films – not in a negative way.

#Eternals is surprising, epic, beautiful yet dense. It takes some big swings, sometimes feels like a DC film (not a criticism), other times feels like no other superhero movie ever. I wish I had a glowing quick reaction to offer you but I’m left with more complex thoughts.October 19, 2021

Eternals is Marvel’s version of Zack Snyder’s Justice League. A film that builds upon a cast of unknown characters and does so with great success. Chloé Zhao direction is superb. Easily one of the best looking Marvel films of all time. Insane post credits scenes too. #Eternals pic.twitter.com/TbZlqPJxGQOctober 19, 2021

Menzel notes in a follow-up tweet, however, that the story structure in the film is "bloated and convoluted". Hooray, some criticism!

We'd advise a bit of caution in seeking out further reactions yourself – a couple of potential spoilers are doing the rounds for this movie from critics, which seems like poor form, considering the public hasn't seen it yet. You don't have long to wait until Marvel's Eternals gets here: it's releasing in theaters on November 5, 2021.