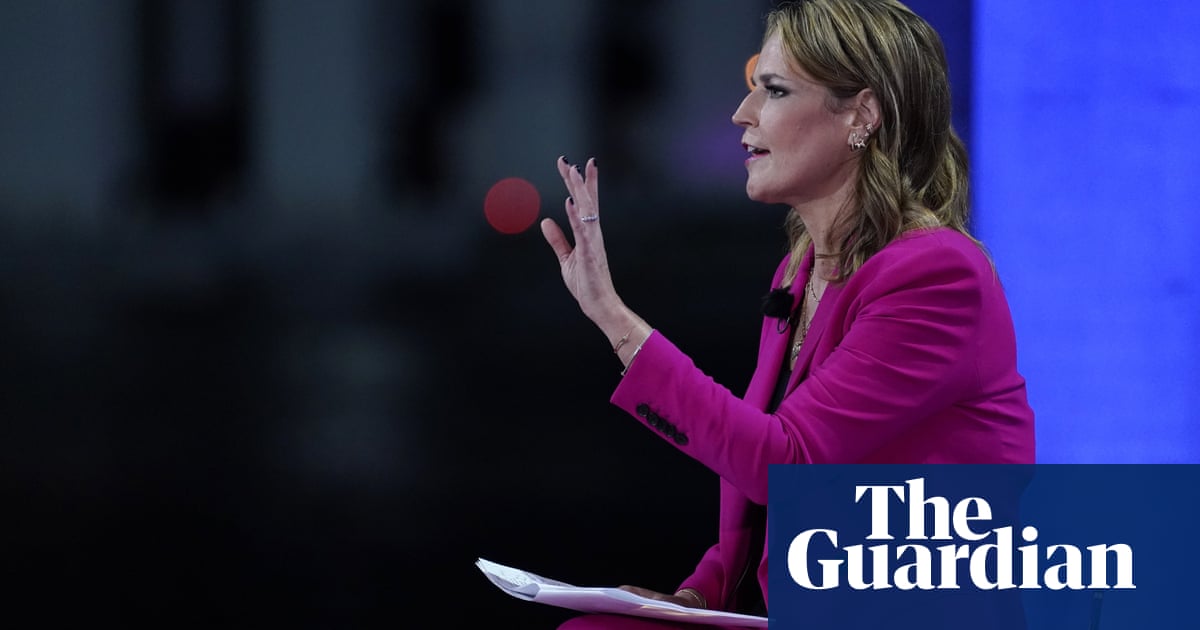 Donald Trump’s floundering performance during Thursday’s NBC town hall left many feeling there was only one winner from the event – Trump’s interviewer, Savannah Guthrie.

Guthrie, a co-host of NBC’s Today morning show, repeatedly got the better of Trump as she pressed the president on his debts, his actions on coronavirus, and the dangerous rightwing conspiracy theory QAnon.

Trump was at times clearly uncomfortable, and his campaign attacked Guthrie less than an hour after the event finished, suggesting Guthrie had filled the role of “Joe Biden surrogate”.

The criticism from the Trump campaign only served to prove that this was a nightmare scenario for the president, who has restricted himself to rightwing media in recent weeks.

In Guthrie, Trump met someone who not only fact-checked him in real time, but at times pushed back on his usually unchallenged rhetoric.

The tone was set early, when Trump claimed that the Centers for Disease Control and Prevention had found that “85% of people who wear a mask catch [coronavirus]”.

Guthrie corrected the president, explaining that is not what the survey said – it found that of a group of 150 Covid-19 patients, 85% said they had worn a mask.

It was rare for Trump to be contradicted, given his “interviews” with Fox News frequently consist of him phoning in and talking at length, uninterrupted.

A standout moment came when Guthrie challenged Trump over QAnon, a baseless online conspiracy theory that the FBI believes is a potential domestic terror threat.

Asked by Guthrie if he would denounce the QAnon theory and “just say it’s crazy and not true”, Trump responded: “I don’t know about QAnon.”

Guthrie stuck to the topic and suggested to Trump that he did actually know about the conspiracy theory, which has been widely covered in the press and has found support among many of Trump’s backers.

“What I do hear about it, they are very strongly against pedophilia,” Trump said.

The exchange created one of the headlines of the night, as Trump seemingly offered a tacit defense of QAnon, whose adherents believe that a cabal of Satan-worshipping Democrats, Hollywood celebrities and billionaires runs the world while engaging in pedophilia.

Believers and promoters of QAnon are a regular presence in crowds at Trump rallies, and Trump and other Republicans have been reluctant to criticize the movement.

Just this week Trump shared a post from a QAnon Twitter account which claimed, baselessly, that Joe Biden had had a navy Seal team killed. Guthrie asked Trump why he had done so.

“That was a retweet! People can decide for themselves!” Trump said.

Guthrie responded: “I don’t get that. You’re the president, not someone’s crazy uncle.”

On Twitter, Trump’s niece, who wrote the book Too Much and Never Enough documenting her experiences with her uncle, appeared to suggest Guthrie could be mistaken.

After the event, Trump’s communications director issued a statement hailing Trump’s performance – an assessment that probably seemed surprising to many of those who watched the town hall.

“Even though the commission canceled the in-person debate that could have happened tonight, one occurred anyway, and President Trump soundly defeated NBC’s Savannah Guthrie in her role as debate opponent and Joe Biden surrogate,” Murtaugh said.

Trump equivocated and claimed he owed “a very small amount of money” and was “underlevered”.

“What I’m saying is that it’s a tiny percentage of my net worth,” Trump said.

The sense that Trump was being subjected to real journalism recalled a contentious Fox News interview with Trump, and an Axios interview, but they came in July and August respectively.

Guthrie, who was born in Melbourne, Australia, where her American father was posted for work, swiftly won praise on Twitter from Democrats and people on the left.