Yahoo News Australia
Share on FacebookShare Share on TwitterTweet
Cristiano Ronaldo marked his 100th game for Juventus with a pair of penalties in a 3-1 success over Genoa on Sunday, as the champions closed the gap on Serie A leaders AC Milan who were held at home against Parma. 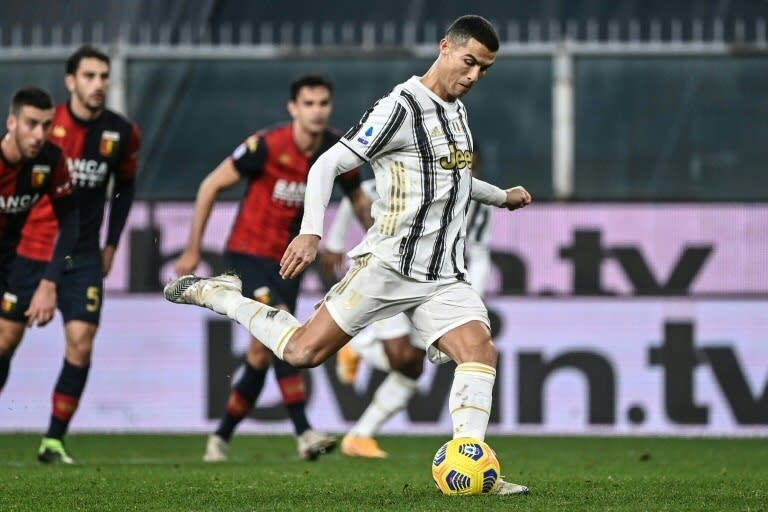 Cristiano Ronaldo marked his 100th game for Juventus with a pair of penalties in a 3-1 success over Genoa on Sunday, as the champions closed the gap on Serie A leaders AC Milan who were held at home against Parma.

French defender Theo Hernandez's brace rescued a point at the death for AC Milan who came from two goals down to draw 2-2 in the San Siro.

Milan's lead on second-placed Inter was cut to three points after Antonio Conte's side staged a 3-1 comeback win at Cagliari.

Napoli, in third, are a further point adrift after beating Sampdoria 2-1, equal on points with nine-time reigning champions Juventus.

Hakan Calhanoglu rattled the woodwork three times with Brahim Diaz also hitting the post for the hosts before Hernani put Parma ahead after quarter of an hour.

The Brazilian midfielder then set up Jasmin Kurtic for the second after 56 minutes.

But two minutes later Hernandez headed in off a Calhanoglu corner with the French defender adding a second in injury time off a rebound.

"It wasn't the best night but we had the quality to bring home an important draw which boosts our self-esteem," said coach Stefano Pioli.

"While Ibra gives us a lot of presence, we did well even without him. We have shown strength, especially psychologically, it's a step forward."

In Genoa, Juventus were boosted after their 3-0 Champions League win in Barcelona, with Paulo Dybala getting his first goal this season.

Stefano Sturaro levelled for the hosts after an hour.

But Nicolo Rovella's foul on Juan Cuadrado allowed Ronaldo to slot in his first penalty after 78 minutes with the second coming a minute from time after goalkeeper Mattia Perin brought down Alvaro Morata.

Genoa sink to second from bottom of the league.

Ronaldo, 35, joins 39-year-old Ibrahimovic as leading scorer in Serie A with 10 goals this season, for a total of 79 since joining Juventus in 2018.

"What better way to celebrate my 100th game for Juventus, than scoring two more goals for the team?" Ronaldo said on Twitter before vowing to reach 100 goals for the reigning champions.

Inter Milan's Romelu Lukaku, 27, is just behind with nine goals after scoring the third against Cagliari in injury time.

Conte's side are out of Europe with their focus now on a first Serie A title since 2010.

They fought back after trailing with a quarter of an hour to go in Sardinia.

Former Cagliari player Nicolo Barella volleyed in the equaliser after 77 minutes with Danilo D'Ambrosio coming off the bench to immediately nod in a second with six minutes to go.

Napoli got their first win in their newly named Stadio Diego Armando Maradona, renamed after the Argentina legend who led the club to their only league titles in 1987 and 1990 and the UEFA Cup in 1989.

Jakub Jankto put Sampdoria ahead in the 20th minute, but Hirving Lozano came off the bench in the second half to spark a Napoli revival.

Lozano got his head to a Dries Mertens cross seven minutes after the break with the Mexican international then crossing for Andrea Petagna to nod in the winner with 22 minutes remaining.

Roma got back to winning ways with an emphatic 5-1 victory at Bologna.

All six goals came in the first half at the Stadio Renato Dall'Ara.

Bologna's Andrea Poli turned into his own net after five minutes before Edin Dzeko added a second to give the hosts a two-goal advantage after 10 minutes.

Lorenzo Pellegrini, Jordan Veretout and Henrikh Mkhitaryan added three more before the break, with a Bryan Cristante own goal putting Bologna on the scoresheet.

In Bergamo, Atalanta eased past Fiorentina 3-0, with goals from Robin Gosens, Ruslan Malinovskyi and Rafael Toloi.