FOX Sports
Share on FacebookShare Share on TwitterTweet
Defending champion France was stunned 1-0 by Tunisia, while Australia remarkably booked itself a spot in the round of 16 as it ousted European Championship semifinalist Denmark.

DOHA, Qatar — It has been a World Cup filled with shocks, but this was a new twist. Two upsets — huge ones, too — happening at exactly the same time.

Group D came to a thrilling conclusion Wednesday, as defending champion France was stunned 1-0 by Tunisia, while Australia remarkably booked itself a spot in the round of 16 as it ousted European Championship semifinalist Denmark by the same score. 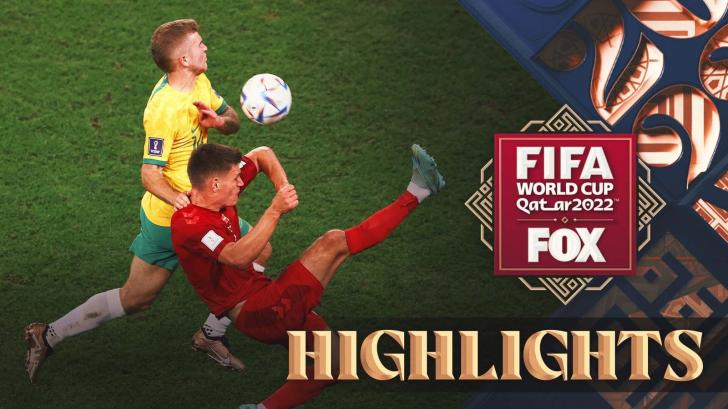 France's setback was a little more comprehensible when considering the decision by coach Didier Deschamps to rest stars Kylian Mbappe, Antoine Greizmann and several other starters from his initial lineup, with qualification booked and top spot in the group virtually assured.

For Australia, the road to advancing was even more dramatic as a second-half strike from Matt Leckie gave the Socceroos a second-straight win and a crack at the elimination rounds.

Few saw this coming. Once the draw was made it seemed like it was destined to be one of the more straightforward groups, a straight fight between the two European side, with Denmark regarded as a solid outsider to win the entire tournament after its impressive Euros performance.

With both games being played simultaneously, news filtered between the stadiums by various technological means. One of the most enduring memories of the World Cup might turn out to be Tunisia's substitutes huddling around a smartphone to watching footage of the other game as time ticked away.

As it turned out, the critical moments took place within mere minutes of each other.

First, Tunisia went into the lead against France with Ellyes Skhiri winning the ball in midfielder and setting up captain Wahbi Khazri to provide a calm finish.

At things stood, it would have been enough to put Tunisia through — but it didn't stand for long. On the hour, Leckie collected the ball in the Denmark penalty area with still plenty to do, but shimmied one way and the other, and then drove a left-foot effort speeding into the bottom corner and past Kasper Schmeichel.

There had already been a number of notable triumphs from Asian and North African teams; Saudi Arabia, Morocco and Japan beating Argentina, Belgium and Germany respectively. This double — Australia plays in the Asian region for FIFA purposes — was as extraordinary as what preceded it.

For the Tunisians, it was pride mixed with heartbreak as they were ultimately left to rue their disappointing defeat to Australia in the second game. At least they had the consolation of hanging on for a win here, even after Mbappe and Greizmann were introduced late.

Greizmann appeared to have scored deep into stoppage time, and after the Australia result had already eliminated Tunisia, only for his strike to be ruled out for an offside.

For the Aussies, pure joy, and why not?

Going into the tournament Australia was widely regarded as one of the weakest teams, having narrowly scraped into the event courtesy of an Asian playoff, then an intercontinental playoff against Peru, clinched in a penalty shootout.

It doesn't matter. They're here now, and still here as others depart around them. Proof once more, if it was needed, that the World Cup has no time for custom or predictability.

Or, it seems, for reputation.

Read more from the World Cup:

Martin Rogers is a columnist for FOX Sports and the author of the FOX Sports Insider newsletter. You can subscribe to the daily newsletter here.