Hot topics close
Home iCarly In 5, 4, 3, 2 … an iCarly Reboot Is Happening at Paramount+

Vulture
Share on FacebookShare Share on TwitterTweet
With Miranda Cosgrove, Nathan Kress, and Jerry Trainor … but no Jennette McCurdy. 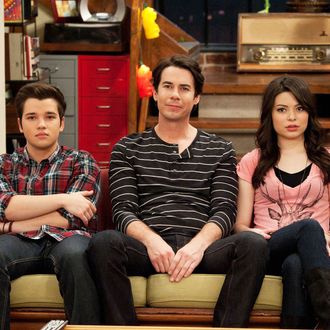 This is all real: Paramount+ is reviving the 2000s Nickelodeon series iCarly, and some of the original cast is returning. Miranda Cosgrove, who played vlogger Carly; Nathan Kress, who played Carly’s cameraman friend, Freddie; and Jerry Trainor, who played Carly’s older brother–slash–guardian, Spencer, will all star in the new revival, according to TVLine. The reboot will be helmed by former Simpsons and Frasier writer Jay Kogen and producer Ali Schouten. Kogen previously worked with iCarly creator, Dan Schneider, on one of his final Nickelodeon series, Henry Danger. The original iCarly ran for six seasons from 2007–12, leading us to wonder what a now-adult Carly and Freddie would be up to nearly a decade later. Is Carly a washed-up YouTuber? Does she become an Instagram influencer?

And, while we’re asking, where is Jennette McCurdy in all this? After playing Carly’s friend and co-star Sam, McCurdy is the only original lead not announced to return. She starred in the one-season iCarly–Victorious spinoff, Sam & Cat, shortly after iCarly with a pre–pop stardom Ariana Grande. Once the revival news came out on December 9, McCurdy posted on her Instagram Story to promote her podcast, Empty Inside. “An extra special thank you to all the empty inside listeners!!” she wrote. “Season 2 coming soon.” Noah Munck, who played Gibby on iCarly and was bumped up to a main role for season four, also wasn’t listed as returning for the revival.