Vulture
Share on FacebookShare Share on TwitterTweet
Sources are calling them an item after a très romantique French getaway. 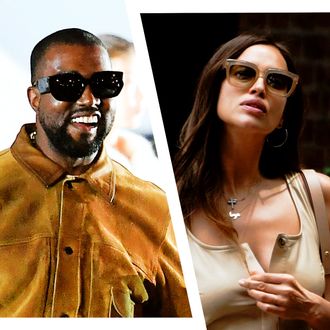 Kanye West and Irina Shayk, each one-half of a high-profile breakup, have reportedly rebounded into each other’s designer-clad arms. Per TMZ, the rapper and model were spotted in French region of Provence on Tuesday, Kanye West’s 44th birthday (Happy belated Westmas to those who observe). In images obtained by the Daily Mail, they can be seen walking around their luxury hotel, with West taking pictures of her. “TMZ has confirmed they are 100% romantically together, but our sources say it’s unclear how serious they are at this point,” reads their report. “In other words, yeah … they’re banging.”

Shayk and West actually go way back — before she and Bradley Cooper had a daughter together, and before West married Kim Kardashian. She portrayed an angel in his “Power” music video back in 2010. He later referenced her on “Christian Dior Denim Flow,” rapping “I wanna see Irina Shayk next to Doutzen” in a verse referencing models. Rumors of their romance kicked up on Deux Moi towards the end of May, who noted “After further looking into this, I don’t know if ‘dating’ is the right word, but there is perhaps some interest there” at the time. Kardashian filed for divorce four months ago, and the tough decision is currently a plot line in the final season of Keeping Up With the Kardashians. The Devil works hard, Kris Jenner works harder, and Yeezus is still one step ahead.