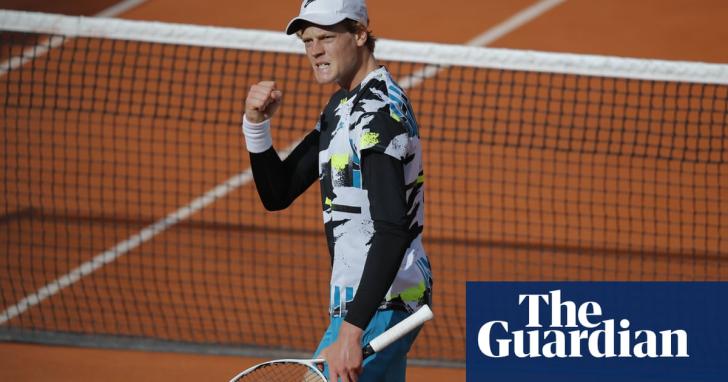 Just seven short years ago, 19-year-old Jannik Sinner’s gaze was fixed on the snowy mountains of South Tyrol, not Paris. He grew up as one of the best young skiers in Italy and he played tennis only a couple of times each week for fun.

It was not until he was 13 that he travelled to the famed Riccardo Piatti academy after choosing tennis, but it was a decision that has changed his life. On Sunday he dismantled the No 6 seed Alexander Zverev 6-3, 6-3, 4-6, 6-3 to reach the quarter-final of Roland Garros on his debut.

Despite how brief his full embrace of tennis has been, this result has been a long time coming. Sinner announced himself at the top of the sport last year by racking up wins on the ATP Challenger tour, qualifying for the US Open, breaking into the top 100 and then winning the NextGen ATP Finals on home soil in Milan.

Five male Italian players have reached the third round of a slam for the first time in the Open era and Sinner stands as the symbol of what is to come from Italy. On the court, Sinner’s gifts are instantly clear. He is a clean, destructive ball striker with rare timing and throughout their fourth round match that doubled as a glimpse into the future, he picked apart the 23-year-old Zverev’s defence with glee.

In September, Zverev reached the US Open final through a series of ugly victories by relying on his big serve and grinding out unforced errors from acres behind the baseline. Against Sinner, it was far from sufficient.

A lingering question is whether Zverev should have been competing at all. He called the doctor on-court and afterwards he revealed that he was sick after suffering a 38C fever.

“What can I say? I’m completely sick,” he said in his post-match press conference. “I can’t really breathe, as you can hear by my voice. I had fever, you know, as well. Yeah, I’m not in the best physical state, I would say. I think that had a little bit of an effect on the match today.”

Players are tested every five days as part of the Covid-19 protocols and Zverev later told German media that all his tests so far are negative, while a member of his team had picked up a cold two weeks ago. He will be tested again.

Meanwhile, Sinner became the first male player to reach the quarter-finals of Roland Garros on his debut since Rafael Nadal. In the quarter-final, Nadal will stand across the net after he easily beat Sebastian Korda 6-1, 6-1, 6-2.