ESPNcricinfo.com
Share on FacebookShare Share on TwitterTweet
The Renegades folded for 60 after the defending champions had taken 130 off their last 10 overs 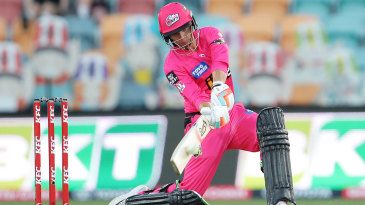 Josh Philippe is still waiting for his first Australia cap, but it can't be far away. He fell five runs short of a maiden T20 hundred as his superbly-paced 95 set up defending champions Sydney Sixers for their first win of the season, before the Melbourne Renegades put in an embarrassing batting display to slump to the heaviest defeat in the BBL.

Philippe, who struggled to get into top gear and was dropped on 24, formed stands of 78 with stand-in captain Daniel Hughes and a destructive 70 in five overs with Jordan Silk who finished with 45 off 19 deliveries. Despite losing a wicket to the first ball of the Power Surge, the Sixers took 32 off the two overs - the best so far in the tournament.

The Renegades only avoided beating their own record for the lowest total in BBL history (57) when Kane Richardson connected with a late six but two balls later he was cleaned up by Ben Dwarshuis who finished with 4 for 13.

A hug from the coach

The maturing nature of Philippe's batting stood out last season when he was a central figure in the Sixers' title - including the match-winning innings in the rain-reduced final - and it was on display again here. He wasn't slow at any point but things weren't quite flowing as he sat on 27 off 24 balls after eight overs. By then the Sixers had lost two wickets, including the in-form James Vince who edged a sharp delivery from Richardson, and Philippe had been given his life when Beau Webster spilled a caught-and-bowled chance in the seventh over.

But as the innings approached the halfway mark, Philippe found his touch, ending the 10th over with a six and a four against Jon Holland. During drinks, and the tactical chat, he got a hug from coach Greg Shipperd which suggested things had gone to plan. Two overs later he had a half-century off 36 balls.

The Power Surge has been a mixed bag so far with wickets often falling in the quest to make the most of those two valuable overs. The Sixers were building nicely when they called it at the start of the 15th over but, first ball, Hughes cut a short delivery from Peter Hatzoglou to backward point and you wondered if it would pay off for them. Well, it most certainly did. Hatzoglou's over went for a useful 12, but it was the next one, from the experienced Richardson, that really did the damage as Silk, who had struggled to 13 off 12 in the opening match against the Hurricanes, struck five fours in six deliveries. The Sixers were charging into the death overs.

Philippe short, but others go long

Silk continued to locate the middle of the bat including a leg-side six that registered 95 metres just as he was talking to the TV commentators. Philippe had the strike for the final over, needing five for his century, and though he middled his drive off Josh Lalor, he picked out Aaron Finch at short cover. Dan Christian sent his first delivery into the stands as Lalor struggled to land his yorker and another Silk boundary brought up the 200 from the penultimate ball of the innings. In all, the last 10 overs had cost 130 runs.

It was a tough chase, but a forgettable attempt. From the moment Finch picked out mid-off in the second over things came off the rails. A standout feature was the Sixers' fielding: Steve O'Keefe (third man), Carlos Brathwaite (third man) and Silk (deep square) all made brilliant outfield takes which typified a team on song. After his first two overs, Dwarshuis had figures of 3 for 6 and Brathwaite helped himself to a brace in his opening over. At one stage five wickets fell in 13 deliveries with the Renegades appearing set for a new low before they at least avoided that.

Andrew McGlashan is a deputy editor at ESPNcricinfo