The Case for Dropping Charges Against Julian Assange by Donald Trump

Muncie Voice
Share on FacebookShare Share on TwitterTweet
Massive Conspiracy by Hillary Clinton Leads to Political Chaos in the USA As I've been saying since May 2017 when I first wrote about the story released an episode of Sean Hannity on Fox News​, most likely tipped off to him by Roger Stone, Glenn Gre 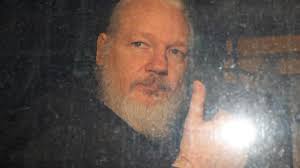 As I’ve been saying since May 2017 when I first wrote about the story released an episode of Sean Hannity on Fox News​, most likely tipped off to him by Roger Stone, Glenn Greenwald​’s article makes an excellent argument for pardoning Edward Snowden; it’s foundational roots (abuse of power), is at the core for dropping the extradition charges against Julian Assange which I argued for several weeks ago on the Muncie Voice website.

You see, those in power who control the Democratic Party, or cronies with Hillary Clinton, were absolutely terrified that Bernie Sanders was going to beat HRC in the 2016 primary election. To remedy that concern, they used their media sources like #MSNBC and #CNN to destroy Bernie Sanders’ chances. They did a smear campaign causing Congresswoman Tulsi Gabbard to quit the Democratic National Committee.

However, Seth Rich, employed by the Democratic National Committee, didn’t quit. He was a strong Bernie Sanders supporter and a true American patriot. He downloaded valuable emails he saw between Hillary Clinton, John Podesta, and campaign manager, Robby Mook. He gave the downloaded information to Julian Assange, the journalist/publisher, over the summer of 2016, and Julian analyzed the data received as they always do to verify their authenticity with Stefania Maurizi. Julian then published said emails on his company’s website called Wikileaks.

As a result, President Donald J. Trump won the 2016 general election by a slim margin. Does anybody remember James Comey’s October surprise causing many to blame him for causing Hillary to lose?

Blaming Comey wasn’t enough; the same news media which destroyed Bernie Sanders because the oligarchs were scared they’d lose their precious profits concocted an entire Russia Gate story to cover up the murder of Seth Rich (still unsolved) propagated by our national media, which has been nothing more than yellow journalists anyway. This was all sold to the American people via nightly news for over three years. It had nothing to do with Russian interference in our election and even clouded the 2020 primary and general elections. More on that later.

If all that wasn’t bad enough, the owner of Fox News, who has been peddling propaganda to the masses since Roger Ailes left Ronald Reagan’s cabinet in the 1980s, Rupert Murdoch, just gave Seth Rich’s family a seven-figure retirement check because they published the story back in May 2017. Neither Fox News nor Sean Hannity had to admit to wrongdoing or retract their original story. They didn’t have to move toward discovery in the case, which would have made the evidence public. It was hush money by an owner of media companies in Australia, England, and the United States.

And, as I said last week, using Julian Assange as the fall guy for a failed campaign that already included crooked dealings to screw over progressives in 2016 was immoral and unconscionable. Not to mention the murder of a young man with a promising history. The United States government even used their hegemony to manipulate the Ecuadorian country to violate international law by releasing Julian Assange into the United Kingdom’s hands so he could be imprisoned in Belmarsh. Lenin Moreno has a lot to answer for the fine people in Ecuador, just like Christine Assange said:

Correct.US backed dictator @Lenin #Moreno is a traitor to the beautiful people of Ecuador