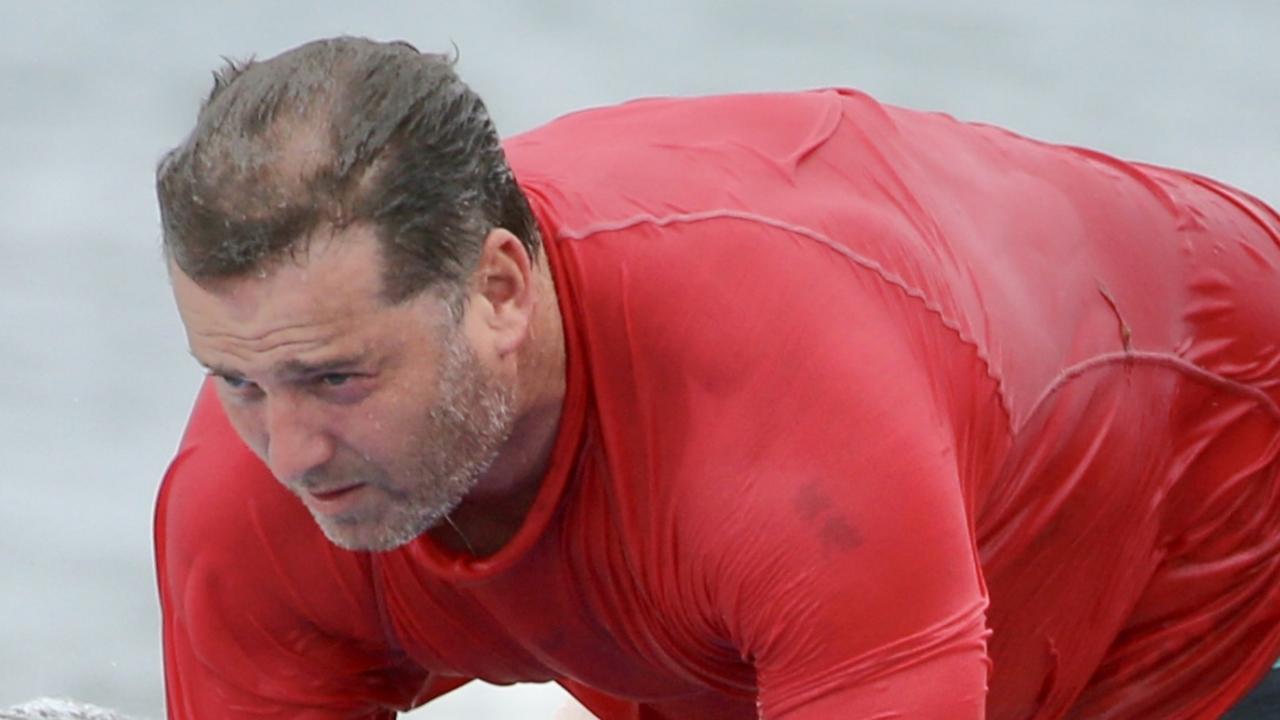 With the ratings period officially over, it's time for TV stars to enjoy a break - but, in the case of Karl Stefanovic, catching a surf break seemed harder than his day job.

The Today host, who snapped up a house in the Queensland holiday spot of Noosa back in April, wasted no time in embracing all the coast has to offer on Saturday morning by diving into what appeared to be his first surfing lesson.

He began the morning with some basic land-based activities before graduating to the waves, where he appeared to struggle with a choppy Noosa swell.

However his efforts did not go unappreciated, with wife Jasmine and six-month-old daughter Harper cheering him on from the sand. Jasmine even used some binoculars to get a closer look at the action.

Mum and bub also made sure thy captured the moment, taking selfies while dad was all at sea.

It's understood the couple, who splashed out $3.6 million for the Noosa waterfront mansion earlier this year, are set to hunker down for an extended summer break at their home away from home.

The pair were later seen stocking up on groceries at the local shops before returning to their stunning four-bedroom, four-bathroom home.

Travel restrictions have limited the amount of time the pair have been able to spend at the pad since buying it on April 7.

But the couple have begun the process of adding an extension to the Noosa Waters abode, with Stefanovic submitting an application submission to Noosa Council on July 10.

Coincidentally, Today's weatherman Tim Davies filmed a series of segments from Noosa at around the same time, with Noosa Mayor Clare Stewart appearing on the show to spruik the tourist trappings of the area.

At one point Davies crossed back to the Sydney studio, at which point Stefanovic stated on-air that Mr Stewart was "the best mayor in Australia".

When co-host Ali Langdon asked: "What do you want Karl?", he joked: "Just trying to shuffle that extension through council."

News An Aussie man, who rescued a shark attack victim three years ago, has himself been mauled by a shark and saved by his fast-thinking mate. This is his story.

Health Burns survivor Carol Mayer’s siblings were holding her hands when she breathed her dying breaths. Now they have paid a touching tribute to their sister.

Crime A man who was tasered by police after he cut an officer with scissors and stabbed a police dog a number of times has died in police custody.

Crime A former prison officer has revealed how a three-day hostage siege ended with a delivery of 15 hot pizzas. WARNING: Graphic material