Business Standard
Share on FacebookShare Share on TwitterTweet
After watching Real Madrid lose its first match in three months, Carlo Ancelotti had one simple message for his players: The holidays are over 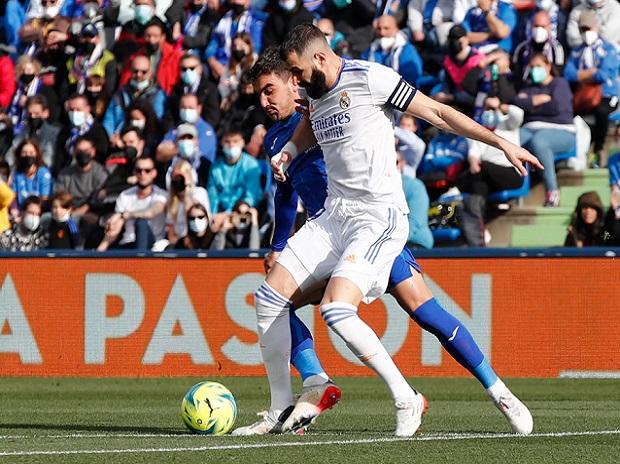 After watching Real Madrid lose its first match in three months, Carlo Ancelotti had one simple message for his players: The holidays are over.

Madrid's run of 15 consecutive games without a loss in all competitions came to an end Sunday when it slumped to a 1-0 defeat at modest Getafe in the Spanish league after a nearly two-week winter break.

League leaders Madrid fell behind early when Getafe striker Enes Unal stole the ball from defender der Milito near the goal and beat Thibaut Courtois. Luka Modric's shot off the woodwork in the first half was as close as Madrid got to an equalizer.

Even though Madrid remained in control of the league with an eight-point lead over second-place Sevilla Ancelotti chastised his team for its attitude.

We can't get carried away by this loss, Ancelotti said.

We are still leaders and are excited about what is to come A player who normally stands out for his defensive play gifted them their goal. It seems we didn't finish the year well. We were lacking focus, lacking commitment. This must be a wake-up call. My team looked like it was still on holidays.

While Madrid had got back several players with the important exception of forward Vincius Jnior, who had been out due to COVID-19 Barcelona earned a 1-0 win at Mallorca with a team badly hit by the coronavirus.

The absence of 10 first-team players gave the rarely used Luuk de Jong the chance to finally show his worth as a striker since he joined Barcelona on loan at the end of the summer transfer market as a bargain replacement for Antoine Griezmann.

Madrid's previous loss came on Oct. 3 when it fell 2-1 at Espanyol. Since then, it had won 13 and drawn two across all competitions.

Ancelotti had steered Madrid to wins over Barcelona, Atltico Madrid, Sevilla and Inter Milan during its unbeaten run.

But it was unable to rally after a mistake by Milito who tarnished his otherwise excellent season with centerback partner David Alaba, with the pair filling the void left by the exits of veterans Sergio Ramos and Raphael Varane.

Toni Kroos appeared to have snuffed out Getafe's attack when he recovered the ball and shuffled it over to Milito, but Unal pressured him hard and poked the ball clear before scoring in the ninth minute.

Sometimes as a striker, you just sense that there can be something there. Luckily it worked out, Unal said about his goal that gave Getafe its first victory over its star-studded crosstown rivals since August 2012.

Getafe started the season losing its first seven matches. But the modest club from a neighborhood of Madrid has turned things around in the league after Quique Snchez Flores took over in early October and is unbeaten in six rounds.

Sunday's matches were the first to be played since Spanish health authorities put back in place caps on attendance after the steep rise in COVID-19 infections. All games are limited to 75% of capacity, with some regions like Catalonia and the Basque Country applying even lower limits.

Barcelona traveled to Mallorca with 10 players from its B team after a spate of COVID-19 cases. Coach Xavi Hernndez had to align a front line with De Jong flanked by youth players Ferran Jutgl and Ilias Akhomach.

De Jong, who had failed to earn consistent playing time, succeeded in providing a potent attacking threat for the visitors.

The Dutch striker tapped the ball onto the post moments before he produced a superb bicycle kick that rattled the crossbar. He then headed in his goal when he reached a cross by scar Mingueza at the far post just before halftime.

Barcelona still needed a stoppage-time save by Marc-Andre ter Stegen to rise to fifth place, one point from the Champions League spots.

ngel Correa scored twice as Atltico Madrid beat Rayo Vallecano 2-0 and end its worst losing run since Diego Simeone took over the club a decade ago.

The defending champions had not lost more than two league games in a row under Simeone. But it finished 2021 with consecutive defeats to Mallorca, Madrid, Sevilla and Granada.

Iago Aspas scored twice to lead Celta Vigo to a 2-0 win at Real Betis, which was left in third place just one point in front of Atltico.

Elche coach Francisco Rodrguez was sent off for repeatedly protesting during his team's 0-0 draw with Granada, while Real Sociedad drew 1-1 at Alavs.

(Only the headline and picture of this report may have been reworked by the Business Standard staff; the rest of the content is auto-generated from a syndicated feed.)