Lakers roster moves could include debut of Kendrick Nunn

Los Angeles Times
Share on FacebookShare Share on TwitterTweet
While the Lakers opened a roster spot by trading Rajon Rondo, a likely spot for Stanley Johnson, Frank Vogel said Kendrick Nunn was close to his debut. 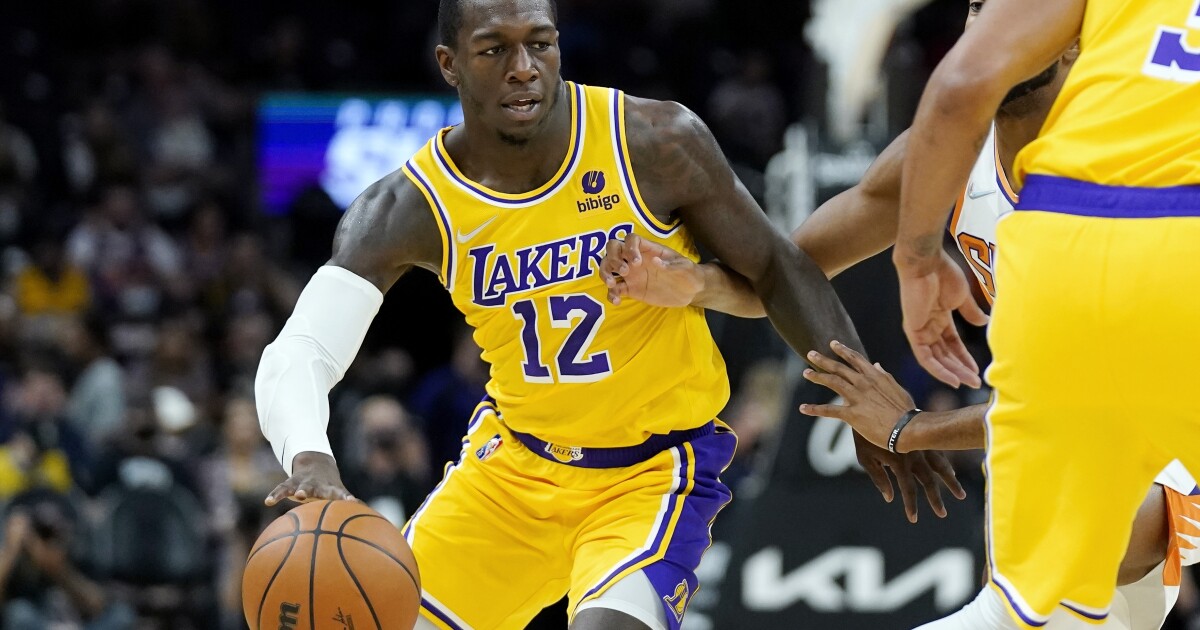 As the Lakers have built some small strands of goodwill with improved play over their last four games, LeBron James often credited the return of the Lakers’ “glue guys” — the players who fill in the gaps around the team’s maximum-contract stars to fully complement what he, Russell Westbrook and, eventually, Anthony Davis can do.

Up next? Maybe it’ll be guard Kendrick Nunn.

One of the few offseason moves that the Lakers were able to invest more than a minimum deal, the Lakers signed Nunn with the expectation that he’d be a contributor on both ends of the court. Before Bradley’s signing at the end of training camp, some NBA scouts felt Nunn would be the team’s best perimeter defender.

But injuries — first to an ankle and then to a knee — have kept Nunn, 26, from playing so far this regular season.

Monday, though, Lakers coach Frank Vogel offered a positive update on Nunn’s recovery from a bone bruise in his right knee.

“He’s making progress. He’s doing more and more on the court,” Vogel said. “I just talked to one of our assistant coaches about the work he did today. And he definitely looks like he’s getting closer to where we need him. Still don’t have a timetable on it, other than to say he’s getting close.”

Nunn averaged 15 points in two seasons with the Heat before signing with the Lakers for two years and $10.25 million.

“[We’ve] got to throw him into the mix and see what he looks like in our system before we can make any real determinations about what his role is going to be,” Vogel said.

“But we love what his game is — shoot the three, to play-make in the pick-and-roll game, and also to be a second side attacker when you have Bron, Russ and AD with the basketball. So, he’s a talented young man and someone we really think can help us.”

The Lakers finalized their trade with Cleveland on Monday, sending point guard Rajon Rondo to the Cavaliers. The New York Knicks were the third team in the deal, with the Lakers receiving the draft rights to French big man Louis Labeyrie, a second-round pick in 2014.

The move saved the Lakers money in the NBA’s luxury tax and created an open roster spot, which they would need if they want to re-sign forward Stanley Johnson.

Neither Johnson nor Darren Collison were with the Lakers on Monday after their 10-day hardship contracts expired. Johnson, though, sounds like he’s still in the teams plans.

“I don’t know real details that I can go into on that other than we still hope to have him back for some more games,” Vogel said. “All those answers will reveal themselves over the next few days.”

Johnson has played in five games with the Lakers, starting three. He’s averaging 6.8 points while giving the team another long, athletic defender.

When talking about how he’d probably need the entire season to find the best pairings and lineups, Vogel included Johnson’s name, saying he “has potentially become a factor for us.”

Lakers assistant coach David Fizdale, who filled in as the interim coach with Vogel fighting COVID-19, is now in the health and safety protocols himself. Vogel said Fizdale virtually attended the team’s coaches meetings on Monday. Assistant Mike Penberthy is also in the protocols, missing the Lakers’ last two games. …Vogel said the Lakers wanted to do right by Rondo and by trading him to a team where he could play, they had his interests in mind in addition to creating roster flexibility. “Rondo means the world to me,” Vogel said. “He’s one of my favorite players I’ve ever coached. He was an integral part of us winning the championship two years ago, me winning my first championship and he’ll always be a special player and special friend to me.”

Update: The Lakers (19-19) host their division rivals twice in the next eight days to wrap their season series. Like the Lakers, the Kings (16-22) have won three of their last four games after beating the Miami Heat 115-113 on Sunday. The Kings are led by their backcourt of De’Aaron Fox, Tyrese Haliburton and Buddy Hield, but former Lakers center Damian Jones has played well in the last week. Other than a pair of coaches in the health and safety protocols, the Lakers should be the same team that’s coming off of wins against Portland and Minnesota as they try to get back over .500.