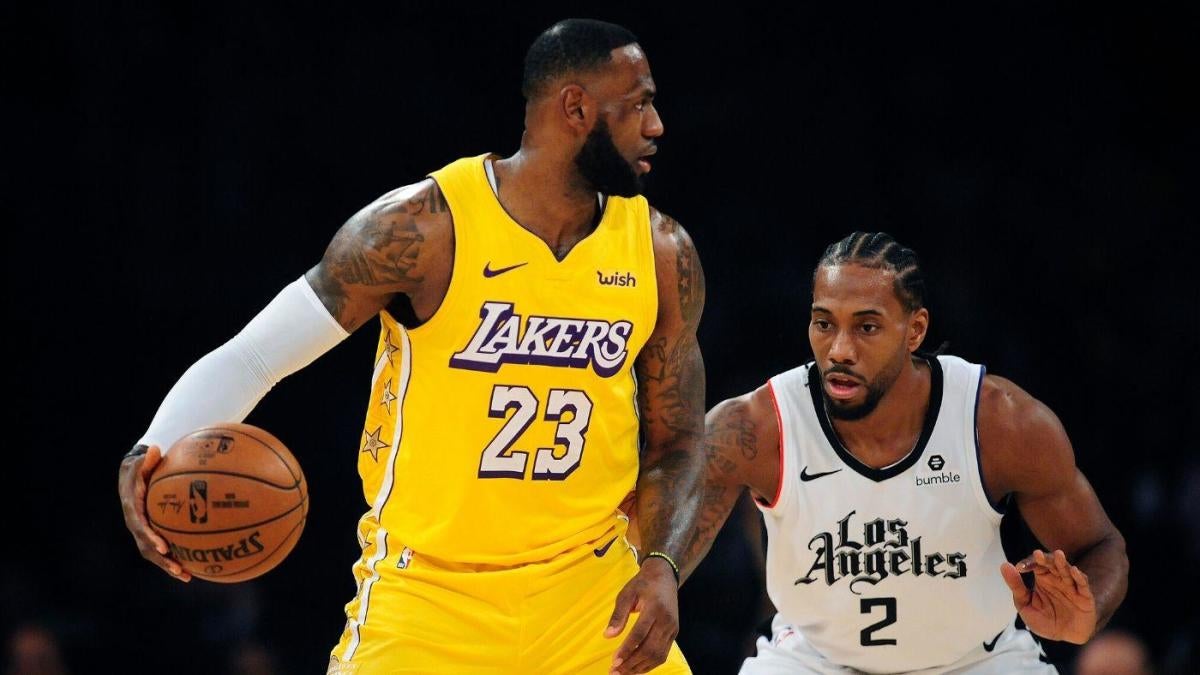 Of all the match-ups available in the NBA's restart, Thursday's game between the Los Angeles Lakers and Clippers is perhaps the most appealing. The "Battle of L.A." is the widely-projected Western Conference Finals matchup and, as the league begins its lengthy journey in Orlando, several of the game's biggest stars will be in action on national television. The Lakers are led by LeBron James and Anthony Davis, while the Clippers also sport a pair of superstars in Kawhi Leonard and Paul George.

Tip-off is at 9 p.m. ET from Disney World. William Hill lists the Lakers as five-point favorites, while the over-under, or total number of points Vegas thinks will be scored, is 219.5 in the latest Lakers vs. Clippers odds after falling as low as 215.5. Before you make any Clippers vs. Lakers picks and NBA predictions, see what SportsLine's advanced computer model has to say.

The SportsLine Projection Model simulates every NBA game 10,000 times, and it's already returned over $4,000 in profit on its top-rated NBA picks during the 2019-20 season. It also was a blistering 52-32 on all top-rated NBA spread picks before the coronavirus shutdown, returning almost $1,700 on those picks alone. Anybody who has followed it has seen huge returns.

Now, the model has set its sights on Clippers vs. Lakers. You can head to SportsLine to see its picks. Now, here are several NBA lines and trends for Lakers vs. Clippers:

Why the Lakers can cover

The Lakers are without a couple of key backcourt pieces in the bubble, but the team's core is intact with LeBron James and Anthony Davis. James turned in an MVP-caliber season, averaging 25.7 points, 7.9 rebounds and a league-leading 10.6 assists per game. Davis is a matchup nightmare for the Clippers, averaging 26.7 points and 9.4 rebounds and providing elite defense, both on the perimeter and near the rim. He's officially listed as questionable but is expected to play.

Los Angeles also creates turnovers at a strong clip, generating a giveaway on 15.5 percent of possessions, and the Clippers periodically have trouble taking care of the ball. That could fuel the Lakers in transition and give them a leg up in the overall matchup.

Why the Clippers can cover

The Lakers were the better team during the regular season, but the Clippers were always playing the long game. Kawhi Leonard and Paul George didn't share the floor as much as many superstar pairings and, in the case of Leonard, load management was at the forefront. Under the bright lights and after a long period of rest, though, the Clippers should be ready to go and, at their best, L.A. is a championship-caliber team.

The Clippers have elite units on both ends of the floor, with big-time shot creation from Leonard, George and Montrezl Harrell. Defensively, Doc Rivers' team should be able to throw multiple looks at James and, even if stopping him is an unlikely outcome, no team has better personnel to deal with the game's biggest star than the Clippers.

How to make Clippers vs. Lakers picks

SportsLine's model is leaning over on the total, with both George and JaVale McGee projected to exceed their scoring averages. The model also says one side of the spread hits in 60 percent of simulations. You can only see that pick at SportsLine.

So who wins Clippers vs. Lakers? And which side of the spread hits in 60 percent of simulations? Visit SportsLine now to find out which side of the Lakers vs. Clippers spread you need to jump on Thursday, all from the model on a 52-32 roll on NBA picks, and find out.