CBSSports.com
Share on FacebookShare Share on TwitterTweet
LeBron James came up clutch for the Lakers when they needed him the most 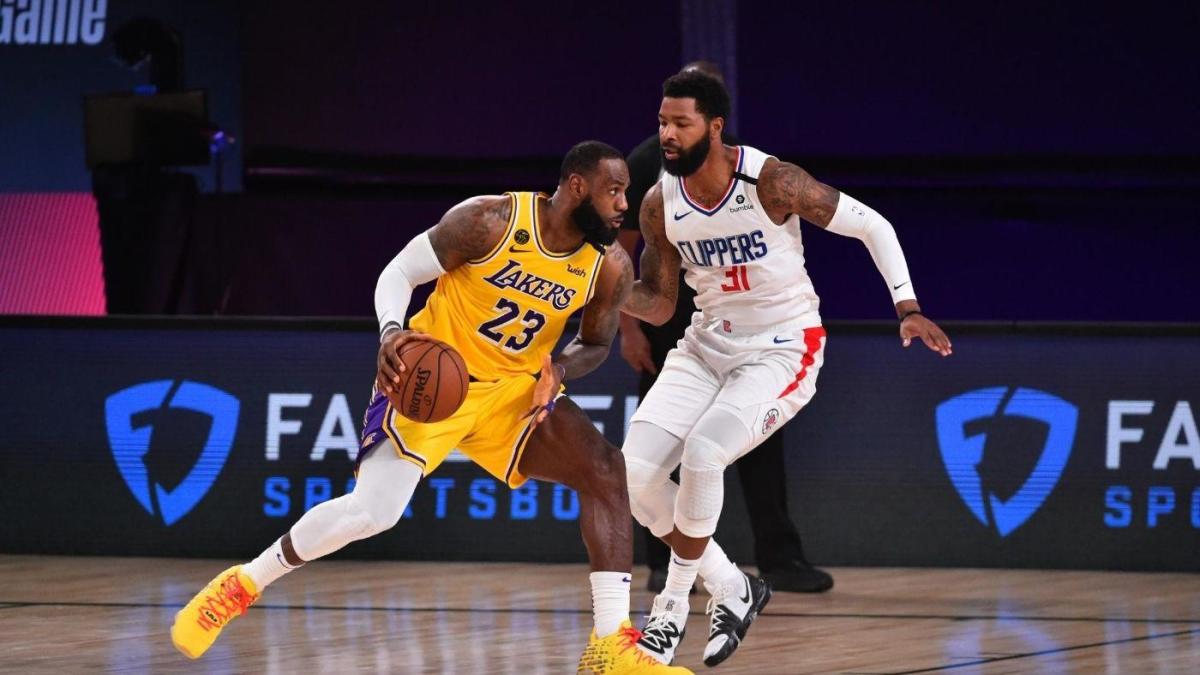 The Lakers and Clippers came into Thursday having already fought three heavyweight bouts, but Round 4 was the closest one yet. The Lakers opened up a 13-point lead in the first quarter, but the Clippers fought back to build a lead of their own. Anthony Davis owned the third quarter and finished with 34 points of his own, but the night belonged to LeBron James.

Despite struggling his way to 6-of-19 shooting, James hit the game-winning runner after rebounding his own miss. He then proceeded to defend Kawhi Leonard on the final possession well enough to force a pass, and then switched on Paul George to contest his game-winning attempt. When the final buzzer sounded, it was 103-101 Lakers.

The two best teams in the Western Conference have now played four times, and they've split the matchups 2-2. The Clippers have outscored the Lakers by only four points in those matchups. These teams are as close as it comes, and now that their regular-season battles are in the books they have a few months to prepare for what should be an inevitable Western Conference finals matchup. Here are the most important takeaways from tonight's game ahead of that likely playoff series.

Kawhi Leonard attempted only two field goals in the fourth quarter, making one of them. That was thanks in large part to LeBron. After three tough matchups against Kawhi during the pre-bubble season, LeBron finally got the better of him on defense in this one. The game's final possession started with James on Leonard and ended with James switching onto Paul George in order to contest his missed game-winning attempt.

LeBron's defense has been better this season. Gone are the days in which his effort wanes and lowlight videos are made to mock him. But he spent most of the season off of the ball, guarding lesser threats and focusing primarily on help defense. This version of LeBron, the apex predator capable of devouring opposing stars on his own, has been absent since Miami. If this caliber of defense is still inside of LeBron, it changes the entire playoff picture.

LeBron's offense was not

Lost in the hoopla of the game's ending was everything it took to get there. LeBron shot 6-of-19 from the field. That takes him to 29-of-79 against the Clippers, a lowly 36.7 percent from the field. His game-winner even came as a rebound off of his own miss. We now have four games of evidence suggesting that LeBron struggles against the Clipper defense. He can hardly be blamed for that. Kawhi Leonard and Paul George are one of the greatest wing defensive duos of all time.

But the Lakers aren't beating the Clippers four times in seven tries without LeBron scoring. Whether that means going small earlier, hunting specific matchups, or adjusting their own rotations in some other way is unclear, but the Lakers need to solve this issue before the Western Conference finals.

Dion Waiters is for real

Forget about the individual stats for a second. Dion Waiters, so undesirable at the trade deadline that he was waived despite having a year left on his contract, has the highest net rating in the bubble. The Lakers outscored the Clippers by a staggering 17 points with Waiters on the floor. Considering he was nominally replacing Rajon Rondo, the Laker with the worst on/off numbers, that is incredibly encouraging. The Lakers seem to have stumbled upon a legitimate second-unit creator, and it came in the form of a player who, less than a year ago, forced a team plane into an early landing after taking too many gummies. What a world we live in.

If any single decision could be blamed for the Clippers losing their March matchup with the Lakers, it would be Rivers' decision to leave Lou Williams on the floor in crunch time. LeBron hunted for him on switches on virtually every possession, and the result was enough offense to push the Lakers over the top.

Fast forward to tonight. The Clippers outscored the Lakers by 16 points with Kawhi Leonard on the floor and were neutral with Paul George playing. With Williams and Montrezl Harrell out, the Clippers didn't have another offensive creator, so staggering their two stars was essential. Yet for four minutes and 21 seconds in the third quarter... the Clippers played with both of their stars on the bench. A four-point lead became a one-point deficit. With the final difference only being two points, that stretch likely cost the Clippers the game.

There is nothing wrong with experimenting in regular-season games, especially against such an important playoff opponent and with no home-court advantage to worry about. To his credit, Rivers got a good look at how a center-less closing lineup would work out tonight and has now seen practically every alignment of his roster against the Lakers in some form or another. But two straight losses like this are concerning. Rivers won't have this much leeway to experiment in the playoffs.

The Ivica Zubac trade isn't coming back to haunt the Lakers

At least we can lay this one to rest: No, the Lakers are not going to regret trading Ivica Zubac to the Clippers. He's a nice rotation player, and giving a rival free value is never a good idea, but he's lost in this matchup. Anthony Davis exploited him for three quick fouls, he gave the Clippers zero points and only three rebounds in 15 minutes, and the Lakers outscored the Clippers by five points with him on the floor. He was the only Clippers starter to be outscored.

Zubac has functions, and will likely be essential if the Clippers run into the Nuggets or 76ers in the playoffs. But he's not mobile enough to hang on the floor in a high-level matchup against more versatile big men. The Warriors rendered him useless in the first round a year ago. The Lakers seem to have done the same. Montrezl Harrell largely monopolized minutes at center in the first three matchups. He'll likely do the same in the playoffs.