BBC News
Share on FacebookShare Share on TwitterTweet
How a 23-year-old singer from West Lothian conquered the Brits by just being himself. 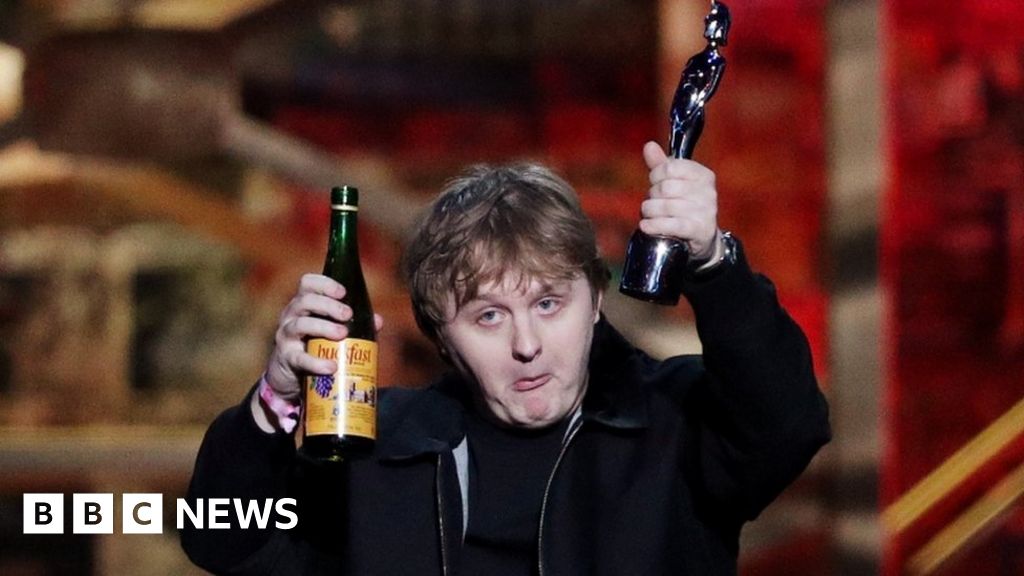 Scottish singer-songwriter Lewis Capaldi has scooped two gongs at the 2020 Brit awards, picking up best new artist and best song for Someone You Loved, which spent seven weeks at No 1 in spring 2019.

His breakthrough song also topped the US charts and earned him a Grammy nomination.

In typical gallus style, the 23-year-old from Bathgate got up on stage clutching a bottle of Buckfast and delivered a speech like no other.

He told the audience at the O2 that the ballad was not a song about his ex-girlfriend Paige Turley, who is taking part in the ITV 2's Love Island programme.

"But it's actually about my grandmother who sadly passed away a few years ago," he said.

"I hope to God ITV don't contact her to be on a reality dating show."

He went on to thank his mother and father "for making love" before adding: "And thanks to my grandma... er, I guess, for dying."

His speech was typically off-the-cuff, humorous and self-deprecating.

Capaldi's debut album Divinely Uninspired to a Hellish Extent was released in May 2019.

Last week, he appeared on the BBC's Graham Norton programme and was congratulated by the host on having the best-selling album of the year.

However, his career shows no sign of slowing down, with a sold-out stadium tour about to get under way.

It is a rapid rise for the young star from West Lothian.

Ross Coutts, who set up some of Capaldi's first shows in his home town, says he knew Lewis was talented but did not expect this level of success.

Coutts knew Capaldi's elder brother Warren and promoted some of his shows.

This led to the 11-year-old Lewis being added to the bill for an all-day festival in Edinburgh.

"We ended up putting him on again at the end because we were that impressed with how he was sounding," Coutts says.

According to Coutts, Capaldi played gigs around West Lothian to crowds of a handful of people but he was just honing his craft.

"He would always be an acoustic act so he'd be on quite early and a lot of the time he'd play in front of two or three people," he says. "But he would always put his heart into the music."

'Who's this Capaldi fella?'

In a social media video released last summer, Capaldi went back to Bathgate for a tour of his old haunts, including his local takeaway and a place called The Grange where he started out in music.

"No matter what, the owners always supported us, so I owe a lot to them," he says.

By the age of 17, Capaldi's homemade sound had attracted interest from music management and he released his first single in March 2017, attracting millions of Spotify streams and a record deal.

He supported Rag'n'Bone Man, Niall Horan and Sam Smith as his profile rose but it was the release of Someone You Loved at the end of 2018 that changed everything.

The video for the hit featured Doctor Who actor Peter Capaldi, who is a distant cousin of the singer, and the song spent seven weeks at number one.

Despite this, Oasis star Noel Gallagher still witheringly asked "Who's this Capaldi fella?", branding the Scottish singer an "idiot".

Lewis reacted in typically playful style, claiming he had "peaked".

He posted a video on Snapchat saying: "What a day. It's Father's Day and I'm getting slagged off by a man who's old enough to be my da'."

He also wore a mask of the Star Wars character when he appeared at Trnsmt in Glasgow in July.

His humour on social media has been another way in which Capaldi has set himself apart from other stars, who often take themselves very seriously.

Old friend Ross Coutts said Capaldi's management had encouraged him to bring out his real personality.

"It has completely changed the way that the music scene is seen across social media," he says. "I believe that record labels are saying to their artists 'you need to be more like Lewis Capaldi'."

Despite his massive success as the self-styled "Scottish Beyonce", there are still people who don't know who he is.

He told Graham Norton that when he was at the Grammy's one of the people employed to fill the seats when the stars nip out of the ceremony for a break mistook him for another seat-filler and wanted to replace him.

Capaldi told them: "I know I didn't win the Grammy but I thought I'd be able to stay until the end."