Hot topics close
Home Lily James Dominic West Isn’t Having an Affair With Lily James, According to Him and His Wife

Dominic West Isn’t Having an Affair With Lily James, According to Him and His Wife 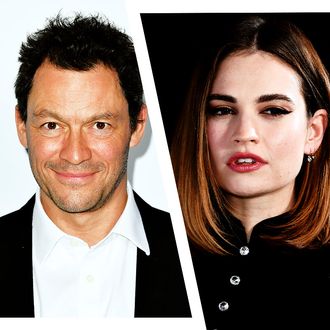 While most of us spent the holiday weekend questioning the historic relevance of a certain explorer, Lily James and Dominic West seemed to be having quite an amorosa time in Rome: The Daily Mail acquired photos of the duo, who are currently starring together in a Pursuit of Love adaptation, taking their miniseries way too literally and making out at a restaurant during a weekend getaway in the eternal city. (We’ll bite our tongue and withhold the obvious Affair joke.) They also, according to the outlet, zipped around in a scooter, bought souvenirs, and got handsy in a church. James, who was recently seen closer than six feet apart with Captain America, looked very happy to put her mask down for a few hours, as did West. Someone else who also seemed surprisingly chill by the scenario? West’s wife, Catherine FitzGerald, who reunited with him the next day outside their home in England. And we know because they handed the paparazzi a piece of paper to tell them such.

In one of the most creative attempts at controlling a tabloid narrative in recent memory, West and FitzGerald summoned paparazzi on October 12 to assure them that they’re still happily married after a decade. “Our marriage is strong and we’re very much still together,” a sheet of paper taped to their house read. “Thank you.” They also, for good measure, posed for a few photos while smiling and smooching, although the Mail noticed that West wasn’t wearing his wedding ring and FitzGerald, a castle heiress, had several used tissues squished in her hand. Girl, it’s time to trade tissues for a high-powered divorce attorney. Preferably one who doesn’t sign his name illegibly.