SB Nation
Share on FacebookShare Share on TwitterTweet
Jurgen Klopp and Liverpool were furious that Atlético had the nerve to beat them ... by playing like Atlético. 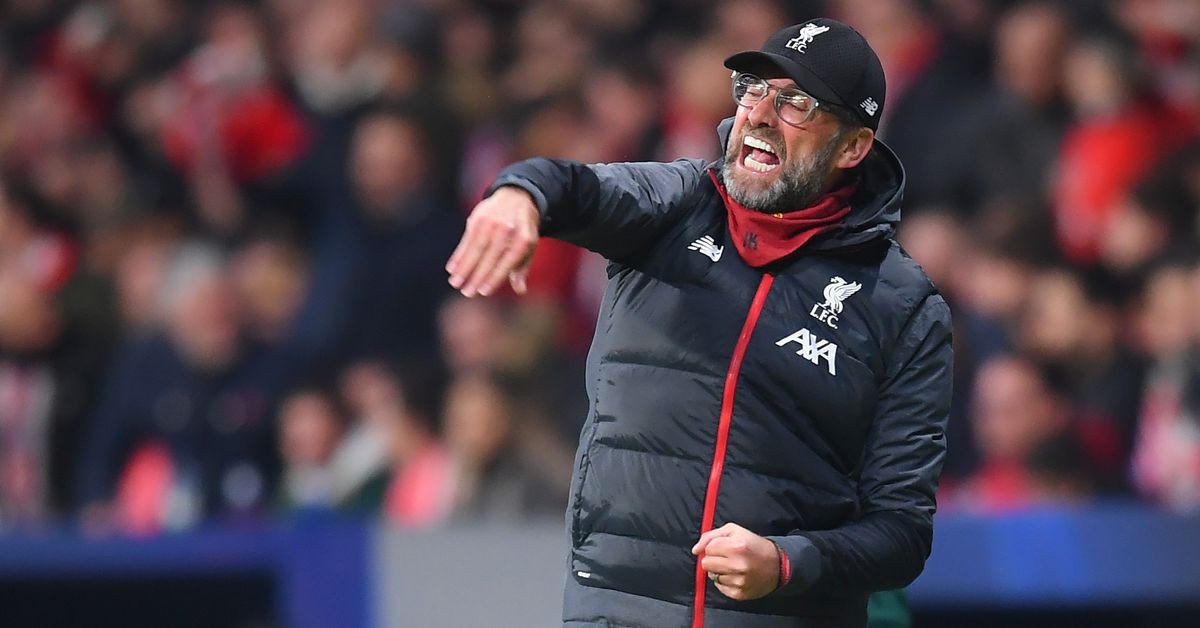 The logical step would be to write about how Atlético Madrid returned to the best and most stereotypical version of themselves against Liverpool. To note that even though it looked as if Diego Simeone had lost his ability and charm in the last few seasons, his team no longer the defensive and disciplined juggernaut it once was, he managed to energize his subordinates for one magical night against Liverpool. And in doing so, he and the team retained the spectacular distinction of never having lost a Champions League game at home.

These are all wonderful takeaways, but the best consequence of Atlético’s win came during the press conference afterwards. Atlético didn’t just beat Liverpool; Simeone and his men rattled Jurgen Klopp and his players. After the game, Klopp sounded bitter as he bemoaned the way Atlético played:

Klopp at presser: "If you want to play like this, and the stadium are happy with how you play, just for the result, they are not here to see sensational football, but they got the result and they are now happy..."

Klopp at presser "They had just two chances, the goal and one second ball after long pass. Apart from that we had them pretty much where we wanted them. 1-0 down changed the game, but I'm not sure that 0-0 would have changed how Atletico played tonight."

But it wasn’t just Klopp. Virgil van Dijk and Andrew Robertson also took time to dismiss the manner in which Atlético scored their goal and won:

Van Dijk was not too gracious either, after having bit of a shocker himself: "The goal at corner, not even a chance, just luck. That is the way they play, that's Spanish football as well, but we handled it pretty well."

Liverpool seem to be upset that Atlético had the nerve to beat them, as if Liverpool were entitled to a win. As if Atlético should have laid down to appease their opponents.

The funniest part is Liverpool specifically complained about Atlético’s deep defending, as if they had never heard of their opponent before. Anyone who has paid any type of attention to world football since Simeone took over Atlético knows if they take a lead, they will sit back and try to grind out that narrow victory.

No matter who Atlético’s attackers are, the team’s guiding principle is that collective and frustrating defensive scheme. They set up a barricade in front of goal and dare opponents to breach it, all while tactically fouling and using every dirty trick in the book. That’s who Atlético are. That’s who they’ve been for a very long time. It’s annoying and can be seen as villainous, but they don’t try to hide or apologize. Regardless of which side of the debate you’re on — whether you think football should be foremost entertaining football, or foremost effective — everyone can agree it is not a team’s responsibility to make things easier for their opponents.

Atlético’s strategy isn’t impenetrable. Real Madrid have broken their rivals several times on the biggest stages, and Barcelona often take pleasure in exposing the self-destructive nature of choosing to defend for an entire game. Atlético has conceded 17 goals in La Liga so far this season. They’re as vulnerable as they have ever been. Yet Klopp and his players are upset Atlético didn’t make themselves more vulnerable for Liverpool’s sake. They couldn’t admit that, for once, the problem was Liverpool didn’t rise to the challenge.

There’s still a second leg to play, and Liverpool may very well walk away winners of the tie. They certainly have the talent and pedigree, and Atlético’s style takes an absurd level of concentration and physical ability to perform well. Liverpool could wear them down, as they’ve done to better teams. They have proven themselves over and over; Atlético would be just another test for them on their journey towards footballing immortality.

But before that happens, it is amusing to see Simeone and his men have trolled Liverpool so effectively that the defending Champions League champions are reacting like upset children. All because Atlético played like Atlético.

Whatever happens with Simeone and Atlético going forward, even if they lose to Liverpool and the team decides to go separate ways from the manager after this season, never let it be said he isn’t one of the best trolls in world football. His style of play might not be the most fun to watch, and it might not be as effective as it used to be, but it has led to tremendous schadenfreude. Liverpool are just the latest victims.