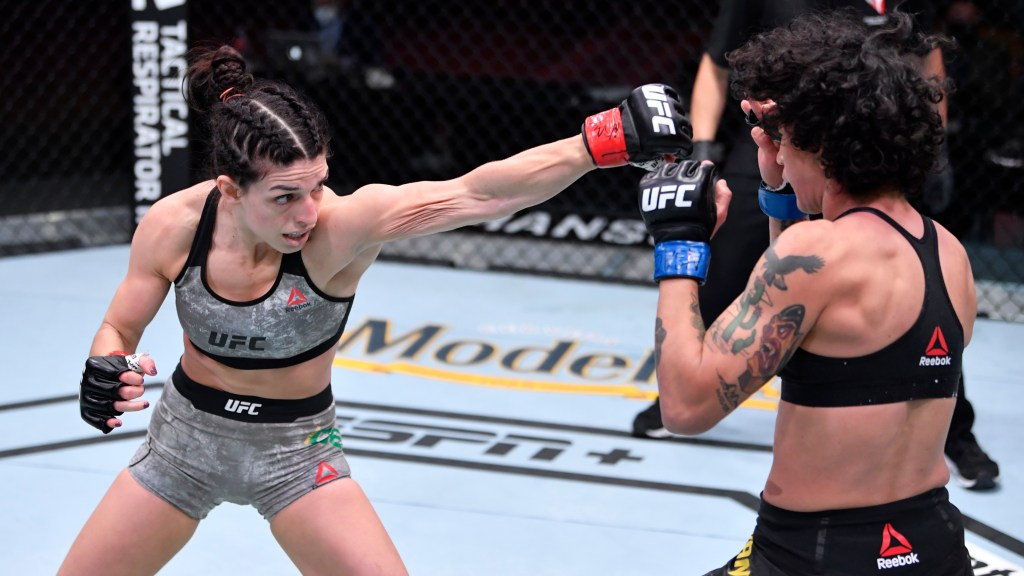 The UFC 256 strawweight main card bout between Mackenzie Dern and Virna Jandiroba figured to be a world-class grappling clinic. Neither fighter, after all, had scored a knockout victory in her MMA career, and the duo combined for submissions in 19 of their 25 career wins.

Instead, a compelling standup battle broke out. And Dern, the two-time World Jiu-Jitsu Championship gold medalist, showed her striking game is starting to come around. Dern overcame an apparent broken nose in the second round to take a unanimous decision at the UFC Apex in Las Vegas, getting across-the-board scores of 29-28.

“I think we both thought it would be on the ground, but she had good takedown defense, and I tried to show my striking,” Dern said in her post-fight interview.

The opening round saw both fighters try to figure out their distance, with Dern (10-1 MMA, 5-1 UFC) stepping on the gas pedal early. She started throwing with precision, but within minutes transitioned to wild haymakers. Former Invicta FC champion Jandiroba (16-2 MMA, 2-2 UFC), for her part, landed with solid intentions too.

The second is where things got down and dirty. The duo continued to trade strikes. Dern accidentally poked Jandiroba in the eye, causing a timeout. When action resumed, Dern wildly rushed Jandiroba, but in the ensuing firefight, took a knee, which likely broke her nose. Dern ended up on the mat for the one extended ground sequence, but Jandiroba wasn’t able to do much with her top position.

In the third, Dern shook off her injury and continued pushing the pace. She rocked her foe with a hellacious right hand, but Jandiroba never was able to get off any sustained offense. A misguided attempt to pull guard instead ended up with Dern in top position as the round ended.

The strawweight bout was part of the UFC 256 main card at the UFC Apex in Las Vegas. It aired on pay-per-view following prelims on ESPN2/ESPN+.