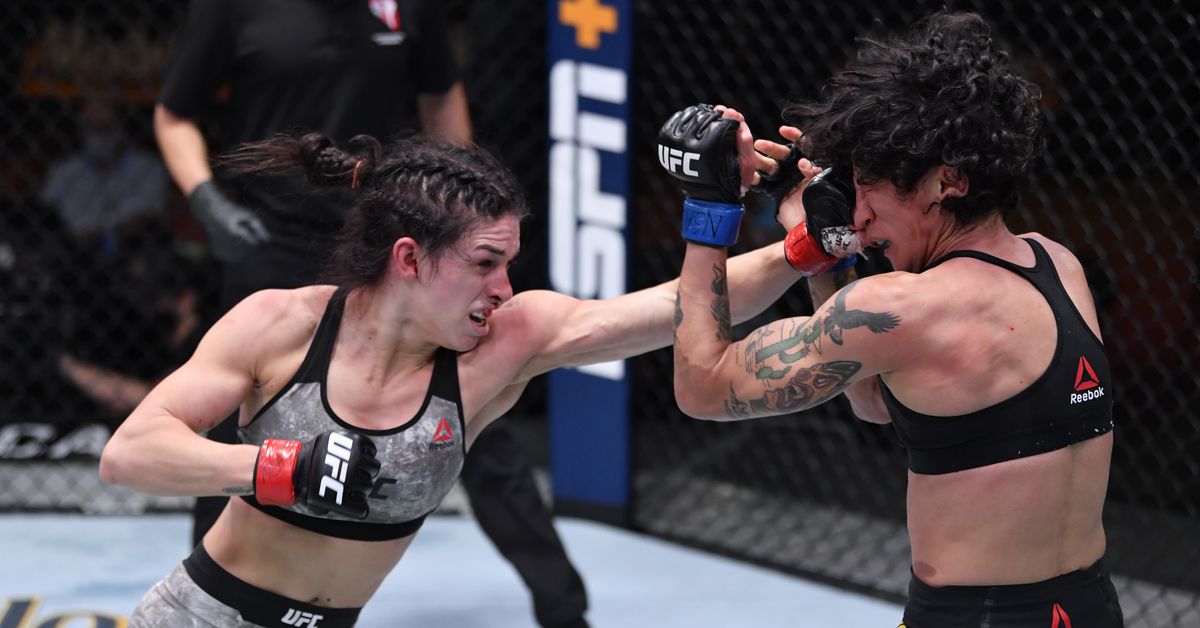 Mackenzie Dern may be a grappler at heart but her rapidly improving striking arsenal is starting to pay dividends.

Taking on another submission specialist at UFC 256, Dern showcased her heavy hands over three rounds while also surviving a broke nose to defeat Virna Jandiroba by unanimous decision. The scorecards all read 29-28 in favor of Dern, who has now won three consecutive fights in a row.

“I never had a broken nose so I figured sooner or later it would happen,” Dern said after the fight. “I knew it was close. With so many good performances today, that’s how I wanted to come out looking. I really had to steal the third round so I’m happy with my performance.”

Despite her well-documented ground acumen, it appeared Dern was determined to earn her first career knockout as she displayed a strong boxing attack against Jandiroba in the opening round. Dern was constantly pressuring forward, which led to a huge right hand finishing almost every combination.

As Dern got a little more deliberate with her punches, Jandiroba was able to make some adjustments, which allowed her to connect with a few stiff shots of her own. Dern continued to power forward but she ate a knee from Jandiroba in an exchange that left her with a cut across the bridge of her nose as blood began streaming across her face.

It appeared that the nose was broken but Dern did her best to ignore the injury as she looked to push the pace during the final five minutes.

While both fighters were connecting with strikes in the third round, Dern managed to pop Jandiroba with a hard right hand that put the 32-year-old Brazilian on her heels momentarily. Dern also snapped Jandiroba’s head back with several stiff jabs that may have helped her secure the decision victory.

Now 10-1 in her career, Dern is beginning to shed the prospect label that she carried into the UFC as a Brazilian jiu-jitsu specialist and she seems ready for a step up in competition after notching her third straight win in 2020.