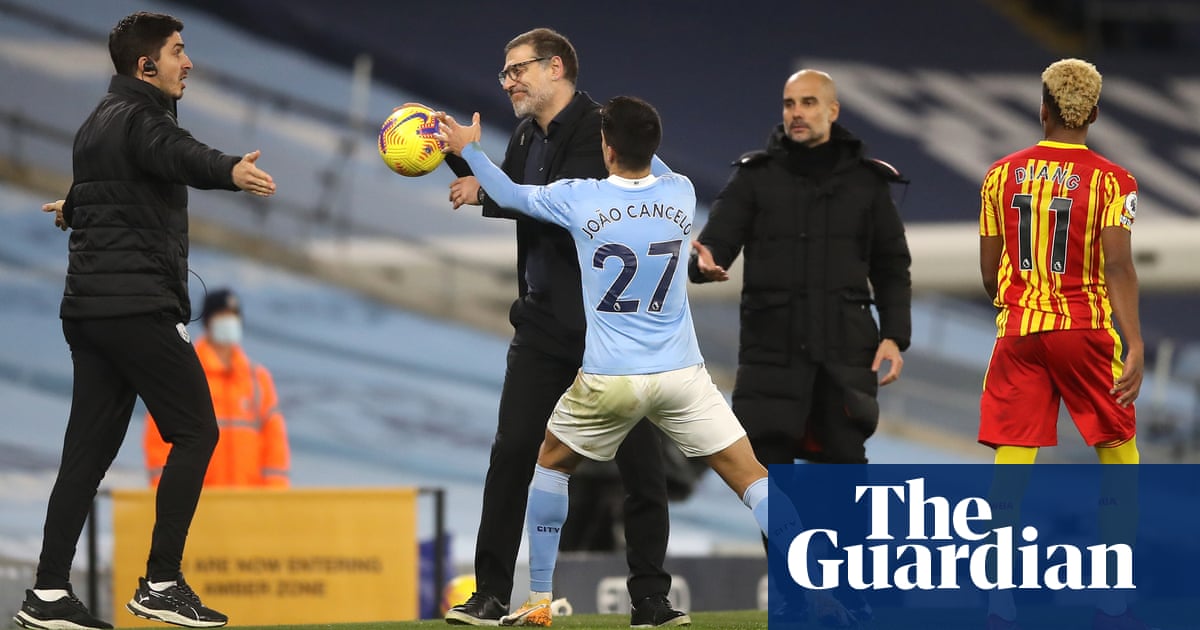 Manchester City are not playing at their best, as Raheem Sterling and others have admitted, and this result screams it even louder than the unexpectedly tepid showing in a dull and disappointing Manchester derby on Saturday.

West Brom deserve immense respect for failing to provide the anticipated lambs for the slaughter, yet though it was a tidy and organised performance by a side next to bottom of the table, it appears Slaven Bilic will be shown the door on Wednesday.

Nonetheless it was still City’s inability to add urgency to the game that was most surprising. Their best chance of winning in normal time came through a Kevin De Bruyne free-kick five minutes from the end, though Sam Johnstone was equal to it and Ilkay Gündogan had gone down when he had hardly been touched in any case. With point-blank saves in the last five minutes from Gündogan and Sterling, the Albion goalkeeper was a hero on the night, though the visitors’ all-round performance was as impressive as City’s finishing was wasteful.

“We’re buzzing at the moment,” Johnstone said. “We rode our luck at times but we defended very well and we deserved the result.”

Pep Guardiola said: “We didn’t create much, especially in the first half, but when you have 26 shots you have to put the ball in. At the moment we are struggling with that. We cannot score a goal but we have to be optimistic.”

West Brom produced the first threat and could and probably should have gone ahead as early as the eighth minute. Conor Gallagher started the attack that led to Karlan Grant picking up a deflection from João Cancelo in the City area. Grant calmly took the ball round an overeager Nathan Aké to improve his shooting angle, only to find Ederson athletically diving to his left to beat away the shot.

While Bilic would doubtless argue that his side are not in a position to spurn the few gilt-edged opportunities that come their way some credit is due to the goalkeeper for an excellent close-range stop.

The rest of the first half proceeded more or less as expected, with the home side gradually pushing their opponents back with the quality and invention of their passing but occasionally overcomplicating things or failing to find the right final ball. Cancelo, for instance, had several options when he carried the ball to the edge of the area midway through the first period, but opted for a lofted pass to the back of the box to pick out Benjamin Mendy, who in turn opted for a first-time volley that flew miles over.

When the opening goal arrived after half an hour it was pleasingly uncomplicated, Sterling making a run behind the West Brom defence on the right, reaching the ball on the goalline then standing up the covering Kieran Gibbs to lay a pass back for Gündogan. He beat Johnstone from close to the penalty spot. Bilic looked disappointed but resigned. It was the sort of goal it is difficult to stop City scoring once they have possession and men to spare on the edge of your area.

West Brom’s task was to reach the interval without conceding again, and they must have feared the worst when Gallagher was booked for sliding, studs up, into Gabriel Jesus on the edge of the area, but though De Bruyne immediately took responsibility for the free-kick his delivery was uncharacteristically overhit.

That left time before the break for the most unexpected of events, a West Brom equaliser, something else that caused Gaurdiola visible discomfort. His side were unable to clear a free-kick from the left touchline. One attempted clearance was headed back into the danger area by Romaine Sawyers, and when Rúben Dias had a go his header only found Semi Ajayi, whose shot was going wide until it struck the hapless Dias for a deflection big enough to leave Ederson helpless.

City naturally tried to respond in the second half but at first the result was messy, with chances being snatched at and attacking moves hurried. After Jesus went close with a header from Gündogan’s corner things literally got messy for the Brazilian, who caught an elbow to the face at the next corner and needed treatment for a cut lip. While it was still mostly one-way traffic City’s normal slickness and precision was missing, and a Matt Philips shot that went close just past the hour was a reminder West Brom were still in the game.

Inevitably Guardiola threw on Sergio Agüero before the end, and he also replaced the ineffective Mendy with Kyle Walker, who immediately sent in a stinging shot that might have found the top corner but for Dara O’Shea bravely sticking his head in the way.

The longer the game went on the more the visitors grew in confidence and resolve, defending with a six-man backline at times and reducing City and De Bruyne to long shots from safe distances.

It ended up a far from happy night for the home side but it could have been worse. Had fans been inside the ground they would almost certainly have been complaining. Just as Guardiola was at the end, lucky not to be censured after spending practically the whole five minutes of stoppage time haranguing and occasionally laying his hands on the fourth official, Anthony Taylor.