The Sydney Morning Herald
Share on FacebookShare Share on TwitterTweet
Melbourne are into their fourth grand final in the last five years. They flogged the Raiders in a comprehensive display which will put both Penrith and Souths on notice. 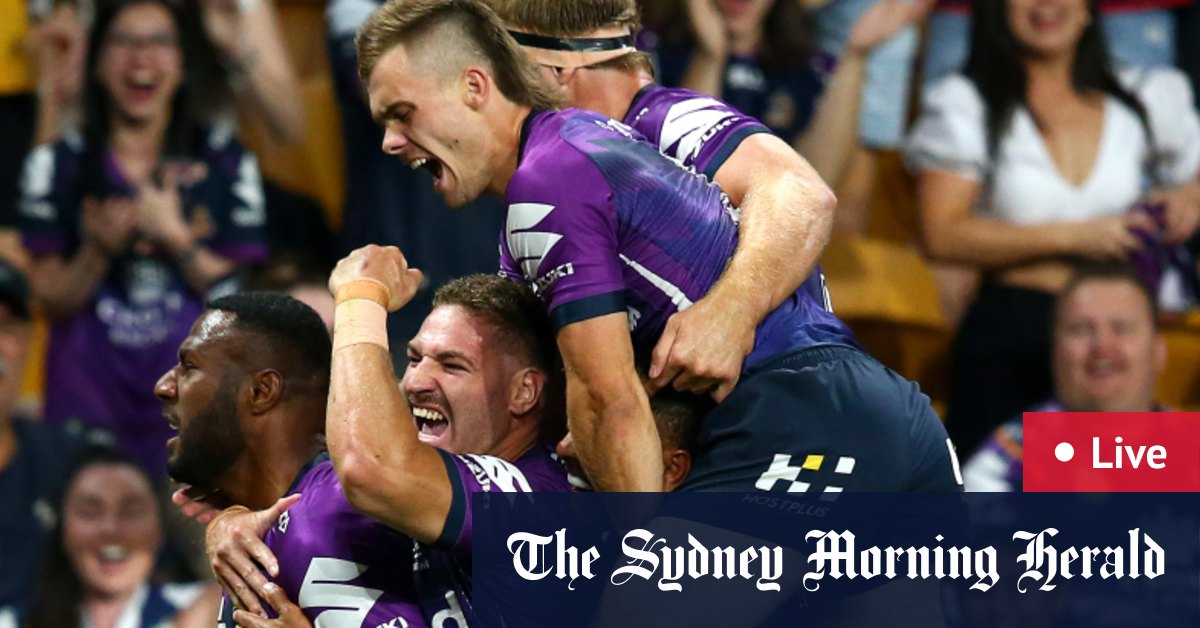 That's all for tonight's blog. Thanks for tuning in.

Melbourne carved Canberra up tonight. Craig Bellamy had his side primed and they flew out of the gates. Canberra never had a hope of making their second consecutive grand final.

They'll face either Penrith or Souths next Sunday in their fourth grand final appearance in the last five years.

It's hard to imagine a more disappointing performance from Canberra. They weren't even close to finals standard in the first 30 minutes. Let alone up to the mark required to beat Melbourne.

Good luck stopping the Storm if they bring their first half level to ANZ Stadium next Sunday.

Win or lose, the game's biggest stage will provide a fitting send off for Cameron Smith, who will likely call time on his illustrious career in nine days time.

See you all then.

Yesterday 9.47pm
Melbourne are through to another grand final

The Storm are once again headed back to the grand final.

They have beaten the Raiders 30-10. The result was never in any doubt.

After falling short of the big dance this time last year, they've made their fourth grand final in the last five years.

The Raiders finally have their second try of the night.

Nic Cotric was the recipient of a classy Jordan Rapana flick pass and the NSW Origin winger made no mistake.

He scored and Canberra now trail 30-10 with seven minutes to play.

The Raiders showed up in the second half tonight. Unfortunately, they were no where to be seen in the first 20 minutes.

Cameron Smith's still got it.

The 37-year-old just stopped an airborne Nic Cotric after he regained his own chip kick and appeared certain to score Canberra's second try of the night with a sensational try saver.

Melbourne are 14 minutes away from yet another grand final.

Almost every bounce of the ball has gone their way tonight and that's exactly how you'd describe Dale Finucane's try to open the scoring in the second half.

A Storm high ball spilled away from the pack, bounced straight into the arms of the unmarked NSW Origin forward and he did the rest.

The Raiders are well and truly on top here but they can't crack Melbourne for their second try of the night.

John Bateman just ran the ball himself when in a 3-on-1 situation when he should have shifted the ball to Jordan Rapana.

Canberra won a repeat set a few plays later but Rapana then turned the ball over and Melbourne have cleared their line.

The two teams have settled into a rhythm in the second half.

The Storm won't mind as they have a 24-6 lead to protect.

Canberra are winning the field position battle but need to score soon to give themselves a legitimate chance of peeling back the 18 point margin.

Jordan Rapana just bombed a try for Canberra, who are on the charge here at Suncorp.

Rapana burned Nic Cotric when he should have thrown a flick pass to his winger, who would have gone close to scoring the Raiders' second try of the night.

A dodgy Siliva Havili pass handed the ball back to Melbourne after Canberra dragged Finucane into his own in goal.

The Storm have worked their way up the other end and forced a repeat set of their own with desperate defence.