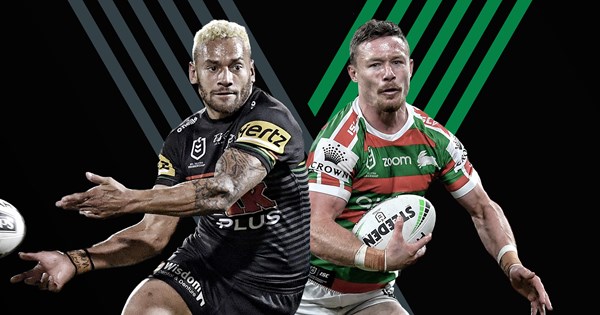 The blistering form of the Rabbitohs will be tested by a team that has lost just once this year.

As the rest of the NRL kept waiting for Penrith to slip up, Ivan Cleary's team continued to get better during the regular season.

Now, they stand two wins away from the title. Their first task is to slow a South Sydney attack that has scored 144 points in their past three matches.

In a match likely to feature plenty of points, if a team falls behind by double figures early there is no need for panic.

Panthers: As he did when he scored two tries in round 20, Kurt Capewell is set to start in the left second-row position after being named in place of the suspended Viliame Kikau. Mobile forward Spencer Leniu has joined the bench. The Panthers are aiming for their 17th consecutive victory. Dean Whare and Jack Hetherington were the two players left out 24 hours before the match.

Rabbitohs: South Sydney have been dealt a massive blow on the eve of their preliminary final with Campbell Graham ruled out with a groin injury. Rabbitohs coach Wayne Bennett said Graham had been carrying the injury for a few weeks, but wasn’t fit enough to face the Panthers on Saturday night.

Bennett said Jed Cartwright would replace Graham in the centres, with Hame Sele coming onto the bench. Bennett said he was confident Graham would be fit to play in the NRL grand final next Sunday, if Souths were to end Penrith's 16-game winning streak. Back-rower Jaydn Su'A had a sore knee but will be fine.

Along with Graham, Steven Marsters was dropped from the squad on Friday.

The Rabbitohs have won seven from eight against the Panthers at ANZ Stadium.

Nathan Cleary v Adam Reynolds. Cleary has been imperious for most, if not all, of 2020, while Reynolds has improved with each week. Both are capable of controlling a match with their kicking games but are also dangerous with ball in hand. Maybe this one will come down to whoever has the best day kicking for goal.

South Sydney have averaged a try every 10 minutes during their recent point-scoring spree. Penrith will be spending plenty of time this week reminding themselves of the threat Wayne Bennett's men provide from anywhere on the field.