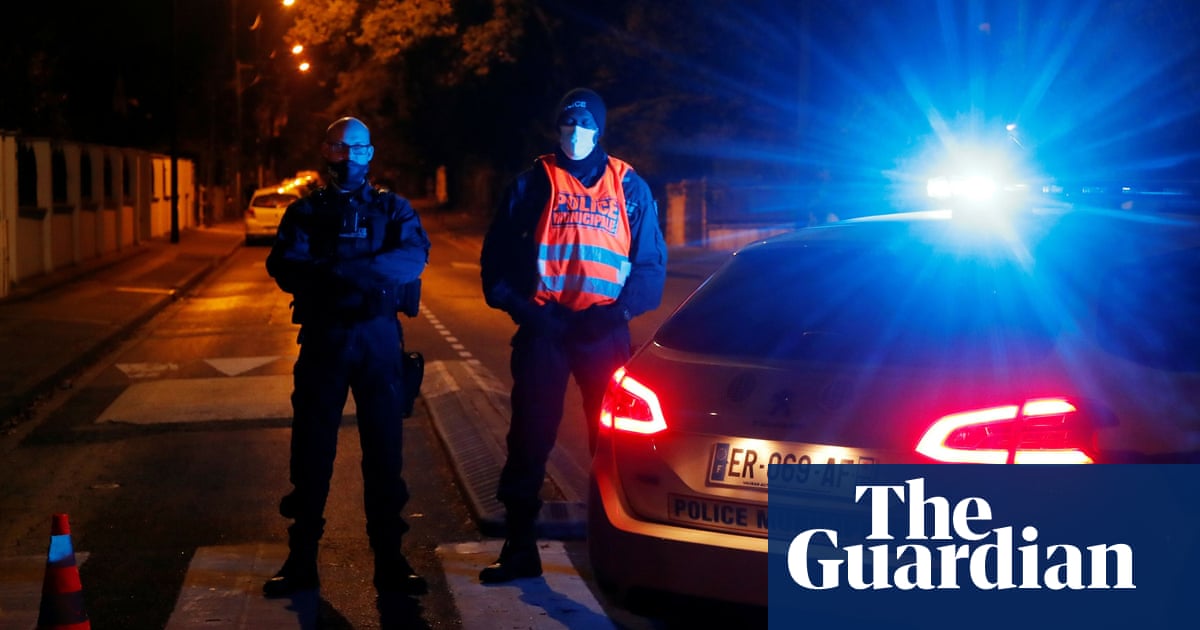 President Emmanuel Macron has said France’s battle against Islamic terrorism is “existential” following the killing of a teacher after he showed his class a caricature of the prophet Muhammad from the satirical newspaper Charlie Hebdo.

Macron, who visited the site near a school in a Paris suburb, said the victim had been “assassinated” and that his killer sought to “attack the republic and its values”. “This is our battle and it is existential. They [terrorists] will not succeed … They will not divide us.”

The president spoke after French police shot dead a man who decapitated a teacher with a large kitchen knife. Officials swiftly announced the killing was being investigated by an anti-terror judge.

Four people, including a minor, are reported to have been arrested since.

The victim was a 47-year-old history-geography professor – the subjects are taught together in France – but also gave the obligatory courses in “moral and civil education”. It was as part of these, and while talking about freedom of speech, that the professor showed pupils, aged 12 to 14, the caricatures. This sparked complaints from a number of parents and one family lodged a legal complaint.

The 18-year-old Moscow-born suspect is said to have shared photos of the attack on social media. Some reports said that he had Chechen roots. He was said to be a “perfect unknown” to the country’s intelligence service, but had a petty criminal record.

The alarm was raised at 5pm on Friday when local police informed their national colleagues that a body had been found outside a school at Conflans-Sainte-Honorine in the Yvelines, a suburb north-west of central Paris.

The killer was chased by police but refused to surrender and was shot several times and killed after reportedly threatening police. Officers sealed off the area after fears the assailant was wearing a suicide vest.

Anti-terror prosecutors said they were treating the killing as an “assassination in connection with a terrorist organisation”.

After the contested lesson, an angry parent posted a video on YouTube complaining about the teacher. On Friday night, another parent posted below the video, defending the professor, writing: “I am a parent of a student at this college. The teacher just showed caricatures from Charlie Hebdo as part of a history lesson on freedom of expression. He asked the Muslim students to leave the classroom if they wished, out of respect … He was a great teacher. He tried to encourage the critical spirit of his students, always with respect and intelligence. This evening, I am sad, for my daughter, but also for teachers in France. Can we continue to teach without being afraid of being killed?”

The video was taken down on Friday night.

The mayor of D’Éragny-sur-Oise Thibault Humbert spoke to reporters about the “horror” of events in his commune. “It’s a barbaric act,” he told BFMTV. .

Macron, sombre and visibly moved, spoke briefly after visiting the college where the murdered professor worked. “One of our compatriots was assassinated today because he taught. He taught his students about freedom of expression, freedom to believe or not believe. It was a cowardly attack. He was the victim of a terrorist Islamist attack,” Macron said.

“This evening my thoughts are with all those close to him, with his family, with his colleagues at the college where we have seen the head teacher show courage in the last week. In the face of pressure [from parents], she did her job with remarkable duty.

“This evening I want to say to teachers all over France, we we are with them, the whole nation is with them today and tomorrow. We must protect them, defend them, allow them to do their job and educate the citizens of tomorrow.”

The education minister, Jean-Michel Blanquer, who was also expected at the scene, tweeted: “This evening, it was the republic that was attacked with this despicable killing of one of its servants, a teacher. My thoughts this evening are with his family. Our unity and our firmness are the only responses faced with the monstrosity of Islamic terrorism. We will deal with it.”

Paris has been on high alert since two journalists from a film production company were stabbed outside the former offices of the satirical newspaper Charlie Hebdo three weeks ago.

In January 2015, Islamist terrorists Saïd and Chérif Kouachi gunned down 12 people in and around the Charlie Hebdo offices. The following day, gunman Amédy Coulibaly shot a policewoman dead and killed four Jewish people at the Hyper Cacher kosher supermarket. The Kouachi brothers and Coulibaly were killed in separate shoot-outs with police.

The trial of 14 people suspected of being linked to the January 2015 terror attacks is currently being held in a Paris court and is due to continue until November.