FRANCE 24 English
Share on FacebookShare Share on TwitterTweet
The man suspected of beheading a French teacher who had shown pupils cartoons of the prophet Mohammed was an 18-year-old born in Moscow and originating from Russia's southern region of Chechnya, a ju… 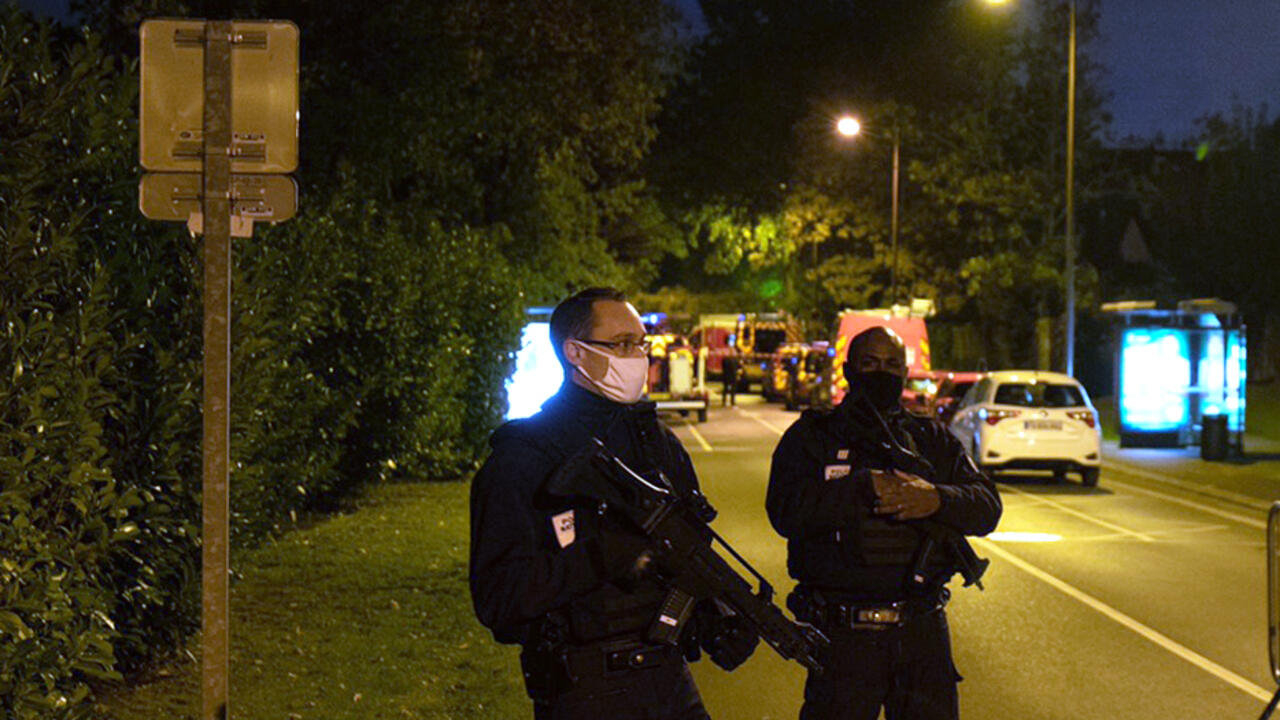 The man suspected of beheading a French teacher who had shown pupils cartoons of the prophet Mohammed was an 18-year-old born in Moscow and originating from Russia's southern region of Chechnya, a judicial source told AFP on Saturday. Five new people were detained, bringing to nine the total number under arrest over the terrorist probe.

Five more people have been detained over the murder on Friday outside Paris, including the parents of a child at the school where the teacher was working, bringing to nine the total number currently under arrest, said the source, who asked not to be named.

According to the source, the two detained parents had signalled their disagreement with the teacher's decision to show the cartoons. The other new people detained for questioning are members of the suspect's social circle but not family members.

The assailant was shot by police and later died of his injuries.

The teacher had recently discussed caricatures of the Prophet Mohammed in class, according to police and media sources.

France's anti-terror prosecutor said it was investigating the fatal attack, which took place in Conflans-Sainte-Honorine, a suburb north-west of Paris, at around 5:00 pm (1500 GMT) on Friday.

President Emmanuel Macron headed to the scene following an emergency meeting at the French interior ministry.

"A citizen has been murdered today because he was a teacher and because he taught freedom of expression," Macron said near the school where the teacher was killed.

"Terrorists will not divide France, obscurantism will not prevail," Macron added.

In a tweet, the satirical magazine Charlie Hebdo expressed its "sense of horror and revolt" at Friday's attack

The grisly murder was an attack on the French nation as a whole, Education Minister Jean-Michel Blanquer said on Twitter.

"Our unity and our resolve are the only responses faced with the monstrosity of Islamist terrorism," the minister wrote.

Reporting from the scene of the attack, FRANCE 24's Julia Kim said the teacher had recently given a class on secularism and the controversy surrounding the publication of cartoons of the Prophet Mohammed by satirical magazine Charlie Hebdo.

The teacher reportedly "asked his Muslim students to leave the room because he was going to show some cartoons of the Prophet Mohammed that could have caused offence," Kim said, adding that this had angered some parents.

"According to my son, he was super nice, super friendly, super kind," the parent, Nordine Chaouadi, told AFP. The teacher "simply said to the Muslim children: 'Leave, I don't want it to hurt your feelings.' That's what my son told me," the parent said.

Last month, a 25-year old Pakistani man attacked two people with a meat cleaver over the Charlie Hebdo cartoons, which are considered by Muslims to be blasphemous.

The attacker seriously injured two employees of a TV production agency, whose offices are on the same block that used to house the satirical weekly. Both survived.

That attack came three weeks into an ongoing trial of suspected accomplices of the authors of the January 2015 attacks on Charlie Hebdo and a Jewish supermarket, which also saw a policewoman gunned down in the street.

Seventeen people were killed in the three-day spree that heralded a wave of Islamist violence in France that has so far claimed more than 250 lives.

Al Qaeda, the militant Islamist group that claimed responsibility for the 2015 attack, threatened to attack Charlie Hebdo again after it republished the cartoons at the start of the trial.

The magazine said last month it published the cartoons to assert its right to freedom of expression, and to show it would not be cowed into silence by violent attacks. That stance was backed by many prominent French politicians and public figures.