Al Jazeera English
Share on FacebookShare Share on TwitterTweet
Among the detainees are four relatives of the suspect arrested in the immediate aftermath of the attack. 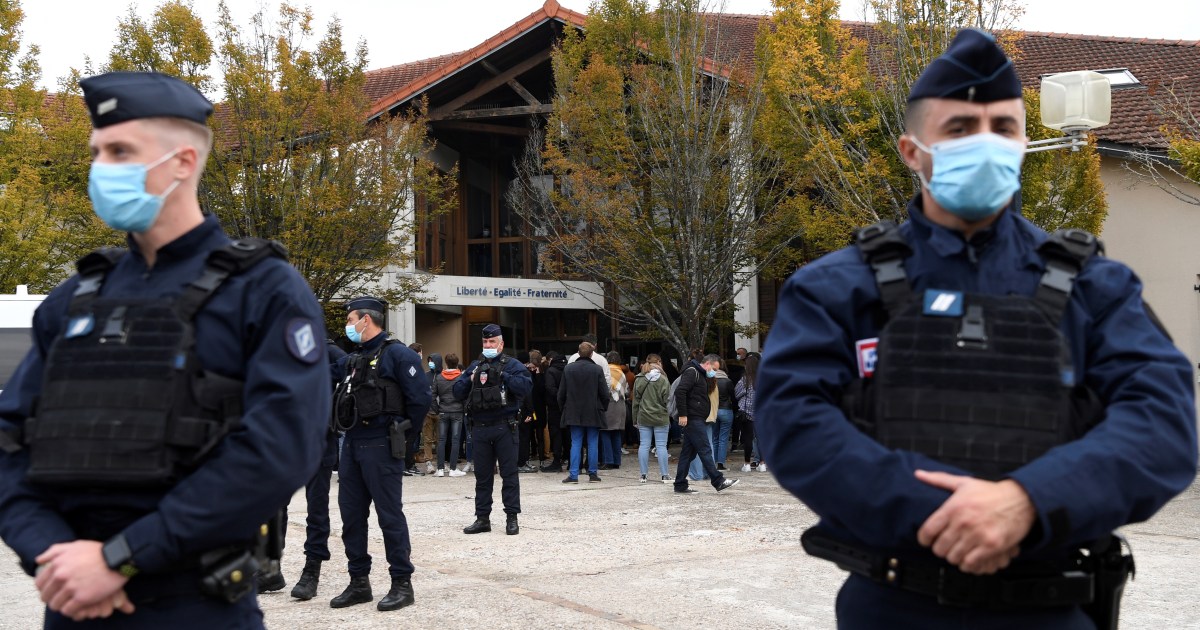 Among the detainees are four relatives of the suspect, including a minor, who were arrested in the immediate aftermath of the attack.

The French police have arrested nine people after a suspect beheaded a school teacher in broad daylight on the street in a Paris suburb on Friday, police sources said.

Samuel Paty, who had recently shown students cartoons of the Prophet Muhammad, was beheaded outside his school.

Police shot the attacker dead minutes after he murdered the 47-year-old history teacher.

Paty had earlier this month shown his pupils cartoons of the prophet in a civics class on the freedom of expression, angering a number of Muslim parents.

Muslims believe that any depiction of the prophet is blasphemous.

The killing was described by French President Emmanuel Macron on Friday as a “terrorist attack”.

Prime Minister Jean Castex said: “I want to share with you my total indignation. Secularism, the backbone of the French Republic, was targeted in this vile act.”

Four relatives of the attacker, including a minor, were detained in the immediate aftermath of the attack in the middle-class suburb of Conflans-Sainte-Honorine. Five more were detained overnight, among them two parents of pupils at the College du Bois d’Aulne where the teacher was employed.

Parents of pupils laid flowers at the school gate. Some said their children were distraught.

“[My daughter] is in pieces, terrorised by the violence of such an act. How will I explain to her the unthinkable?” one father wrote on Twitter.

Muslim leaders condemned the killing, which many public figures perceived as an attack on the essence of French statehood and its values of secularism, freedom of worship and freedom of expression.

Tareq Oubrou, the imam of a Bordeaux mosque, said of the killing: “It is not a civilisation that kills an innocent person, it is barbarity.”

“Every day that passes without incident we give thanks,” he said. “We are between hammer and anvil. It attacks the republic, society, peace and the very essence of religion, which is about togetherness.”

France has over the past several years seen a series of violent attacks, including bombings and shootings in November 2015 at the Bataclan theatre and sites around Paris that killed 130 people.

Late last month, a man, who emigrated to France from Pakistan, used a meat cleaver to attack and wound two people outside the former offices of satirical magazine Charlie Hebdo.

That was the spot where armed men gunned down employees of the magazine five years ago in retaliation for the magazine’s publication of cartoons of the prophet.

The issue of the cartoons was revived last month when Charlie Hebdo decided to republish them to coincide with the start of the trial of accomplices in the 2015 attack.