PerthNow
Share on FacebookShare Share on TwitterTweet
Peter Siddle may be 36 but the bleach-haired veteran is still a BBL force after a career-best performance in the Strikers’ first win of the season. 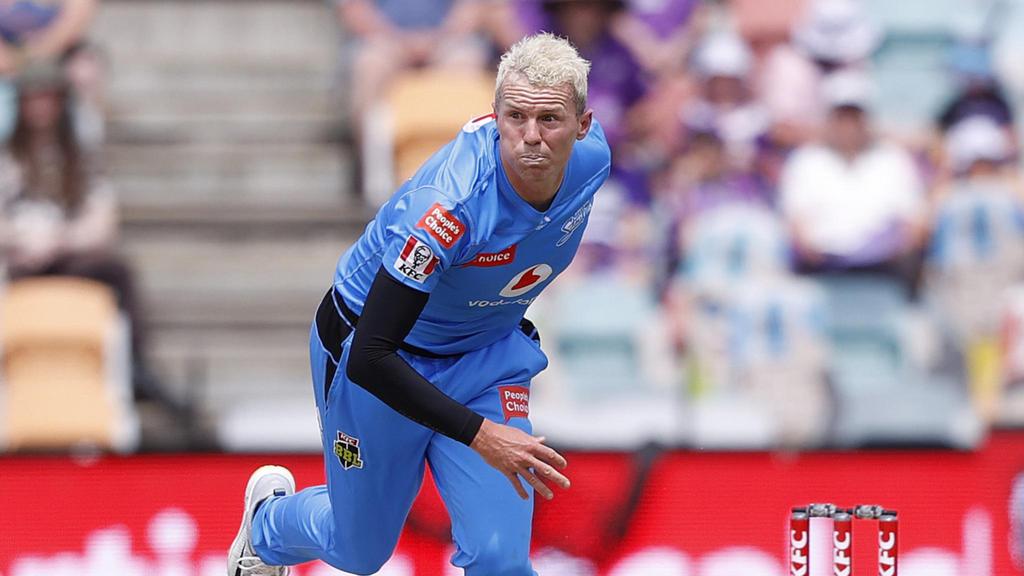 Peter Siddle may be 36 but the bleach-haired veteran is still a BBL force after a career-best performance in the Strikers’ first win of the season.

On a pitch offering the seamers assistance – both teams created history by activating their “X-factor” player and pulling spinners Danny Briggs and Johan Botha from the match – Siddle thrived to help contain Hobart to 146.

The Strikers then recovered from a double blow in the opening over of the run chase as returning skipper Alex Carey (55 from 39 balls) and Jake Weatherald (68 not out from 48) steered the visitors across the line five wickets down to bounce back in style from Sunday’s loss in Hobart.

For the second time in three matches the Hurricanes lost openers Will Jacks and D’Arcy Short in the opening two overs, and despite the efforts of Ben McDermott (46 from 33), Colin Ingram (46 off 35) and Tim David (24 from 15) were never able to turn the momentum fully their way, including losing 5-17 in their last 15 balls.

Hobart slumped to 3-20 inside the powerplay and although McDermott and Ingram steadied with a 75-run partnership, they both perished just when Hobart was looking to up the ante.

However Carey and Weatherald’s class shone through as they combined for their second century partnership in three games at UTAS Stadium.

It took eight matches but Big Bash history was finally created when both teams introduced their “X-factor” player.

Questions surrounded how the somewhat controversial addition to this year’s tournament would be used but it became quickly evident on a pitch giving the quicks help that the role of the spinners would be reduced.

Adelaide withdrew Danny Briggs after his solitary over went for 15 runs and replaced him with all-rounder Matt Short, while the Hurricanes swapped Johan Botha for Mac Wright to bolster their batting.

Ben McDermott and Jake Weatherald celebrated their 50th BBL matches, both having an impact for their sides.

McDermott helped rebuild the Hurricanes’ innings with his fluent knock, not missing a beat in his first appearance for the tournament.

Weatherald was just as much a factor for the Strikers in the field as with the bat, taking a pair of great catches to remove Will Jacks and then danger man Colin Ingram.

STRIKERS’ HOME AWAY FROM HOME

Remarkably the Strikers are unbeaten at the venue, while the Hurricanes hold a paltry 1-5 record, including dropping their past four.