A Full Guide to the Debate Tonight

The New York Times
Share on FacebookShare Share on TwitterTweet
Does the president dial back his aggression? How will Joe Biden lay out his closing argument? Here’s what we’ll be looking for as the candidates face off in Nashville on Thursday night. 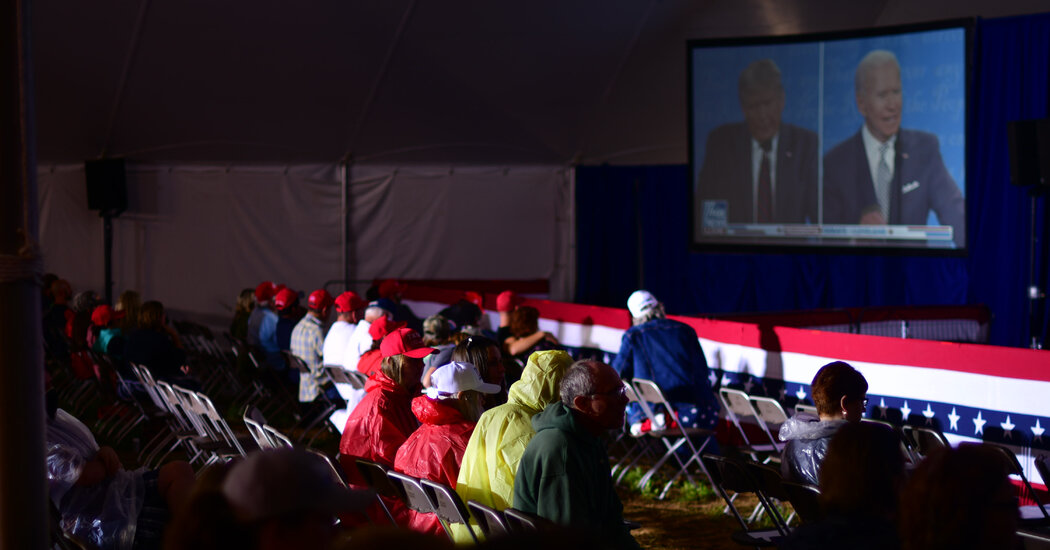 [Follow our live updates on the debate and the 2020 election.]

The first question about Thursday’s debate: Will it really matter? At this point, haven’t most voters made up their minds? Many have already voted. And is there anything else to say?

The answer is that it certainly may matter. There are always a few voters left who have not decided whom to support. And there are those who may need an extra last-minute nudge to turn out.

Barring some cataclysmic event in the next two weeks, it is the last moment in the race guaranteed to draw a huge viewership, and it will be the final time Mr. Biden and Mr. Trump are scheduled to share a stage.

And it is particularly important for Mr. Trump, who is trailing in most national and battleground state polls and whose performance at the first debate appeared to hurt his standing. The president pulled out of what was supposed to be a second debate after the Commission on Presidential Debates decided that the forum should be held virtually in light of Mr. Trump’s coronavirus diagnosis.

Here’s what we’ll be watching for when the candidates face off in Nashville.

Does Trump dial it back?

This may be the most intriguing question of the night. Will we see a reprise of the hectoring, interrupting president who frequently talked over the moderator, Chris Wallace, and Mr. Biden? Few people thought that did him much good. And it may be more difficult this time: Microphones will be muted during portions of the debate to prevent such disruptions.

“In the best of all words, he would watch the Pence-Harris debate three times and realize this isn’t 2016 and Biden is not Hillary Clinton,” said Newt Gingrich, the Republican former House speaker. “He has to move toward a calmer, more issue-oriented, less personality-driven debate. He has the perfect model with the vice president.”

But time is running out. At this point, Mr. Trump needs to try to accomplish what he has been unable to do so far: Give voters who are on the fence a reason not to support Mr. Biden.

“Anything Trump does now that doesn’t seek to make Biden an unacceptable alternative is a waste for Trump,” said Nelson Warfield, who was a senior campaign aide to Bob Dole, the Republican candidate for president in 1996.

And Mr. Trump needs to do that while under the extra scrutiny of his manners that awaits him after their last debate.

Can Biden keep running out the clock?

Mr. Trump has every reason to seize this 90-minute debate to make the best case for his re-election and attack Mr. Biden. But Mr. Biden will walk on the stage with a decidedly less urgent to-do list.

Given his lead in the polls and his propensity for the occasional misstatement, Mr. Biden did not really need this final debate. When Mr. Trump balked at the virtual format for the second debate, Mr. Biden moved instantly to schedule a town hall event with voters.

Both Democratic and Republican strategists said that Mr. Biden’s task at the first debate was to present himself as cogent and in command, to rebut with his appearance the suggestion by Mr. Trump that Mr. Biden at 77 was getting slow with age. (Mr. Trump is 74.) By every account, Mr. Biden crossed that barrier.

Mr. Biden can use the debate to make a closing argument and to lay out his case against Mr. Trump, particularly for his faltering response to a pandemic that has killed over 220,000 people in the United States. Beyond that, Mr. Biden may well be tempted to simply run out the clock. A no-runs, no-hits, no-errors performance is probably all he needs.

The pandemic still trails the president.

Mr. Trump will be taking the stage this time as someone who has been a coronavirus patient, announcing he had the virus shortly after the first debate. He spent three days in the hospital, where he was the beneficiary of some of the most aggressive and cutting-edge treatment, and has proclaimed himself cured. It was not just Mr. Trump: Covid-19 swept the White House after the nomination ceremony there for Judge Amy Coney Barrett, an event distinguished by the lack of social distancing or masks.

Mr. Trump has seemed eager to move on from talking about the pandemic. He has argued, in the face of overwhelming evidence to the contrary, that the nation has turned a corner on the virus. He has defied medical experts in traveling the country holding rallies and mocking the use of masks.

But no issue has defined this contest, or has hurt him politically, as much as the pandemic.

He has struggled, in interviews and the last debate, to defend his response to the crisis and suggest that many people, including Mr. Biden, also failed to appreciate the gravity of the threat in the early days. But Mr. Trump’s personal experience — the widespread criticism that his lack of precautions contributed to the outbreak at the White House — will be a subtext for at least part of the debate.

Hunter Biden in the cross hairs

From the earliest days of this campaign, Mr. Trump has sought to damage Mr. Biden by disparaging the business dealings of his son Hunter and claiming that Mr. Biden, as vice president, embraced policies that allowed the younger Mr. Biden to enrich himself in his dealings with Ukraine and China. These allegations, many of them unproven or questionable, have circulated widely on Fox News and right-wing social media. But, to the frustration of the president and his advisers, they have so far not appeared to break through beyond that audience.

The Trump campaign could not have been clearer in recent days in telegraphing that Mr. Trump intends to use this final stage to raise the allegations again. “If the media won’t ask Joe Biden these questions, the president will, and there will be no escape for Biden,” Bill Stepien, the president’s campaign manager, said in a statement.

At the last debate, when pressed by Mr. Trump on the issue, Mr. Biden appeared to struggle a bit with the question; presumably he will be better prepared on Thursday. For Mr. Trump, the goal is to tarnish his opponent. For Mr. Biden, at the very least, the attacks on his son might goad him into making the kinds of mistakes that might dominate a news cycle or two.

Biden may face new pressure on expanding the Supreme Court.

Mr. Biden managed to elude answering questions from Mr. Trump at the first debate about whether he would, as president, support expanding the number of seats on the Supreme Court. He is under pressure from many Democrats who see an expanded court as the best way to counter Mr. Trump’s success in installing two (and very likely soon to be three) members of the court.

After weeks of declining to clarify his position, Mr. Biden said in an interview made public on Thursday that if elected, he would establish a bipartisan commission of scholars to study a possible court overhaul more broadly.

“I will ask them to, over 180 days, come back to me with recommendations as to how to reform the court system because it’s getting out of whack,” he told CBS News’s Norah O’Donnell, according to an interview excerpt that is expected to be broadcast in full Sunday on “60 Minutes.”

Previously, Mr. Biden had said that a firm answer on expanding the court would take attention away from what he said was the main issue: the decision by Republicans and Mr. Trump to rush through the nomination of Judge Barrett to fill the vacancy created by the death of Justice Ruth Bader Ginsburg.

But the former vice president came under increasing pressure to respond. At a town hall event with George Stephanopoulos last week, he agreed that voters had a right to know his views on such a critical issue and said that he would disclose his position before Election Day. His comments on Thursday suggested that he knows he can’t keep dodging the issue entirely, but they left open questions about what he personally intends to do.

Mr. Trump senses an opening here. Polls suggest that the public at large does not support court-packing, and Mr. Biden has signaled in the past that he does not think it is a good idea. Pressing Mr. Biden to come out in opposition could depress his support in the left wing of the Democratic Party.

A rare appearance on the debate agenda: climate change

Mr. Trump flew to California last month to inspect the devastation from wildfires that have swept thorough the West this year, at a time of rising temperatures that scientists have long warned about with climate change. But Mr. Trump, meeting with California officials, said blame for the fires lay with the failure of California to clear dead trees and clean its forest floors, and he repeated his skepticism that the climate is changing. “It’ll start getting cooler,” he said. “You just watch.”

Mr. Biden retorted by calling him a “climate arsonist.”

That long-distance back-and-forth on an issue that sharply divides Mr. Biden and Mr. Trump is set to be debated Thursday evening, one of the rare times that climate change will have been raised at a presidential debate. There is much to talk about. Mr. Trump, from the moment he took power, dismissed climate change as a hoax and systematically rolled back environmental regulations that were put in place by President Barack Obama with the support of his vice president, Mr. Biden.

Mr. Biden called it one of the greatest threats facing the world in the coming century.