CNN
Share on FacebookShare Share on TwitterTweet
Barack Obama, in a moment of catharsis that doubled as a warning against Democratic complacency, blasted President Donald Trump in a speech dripping with ridicule ahead of Thursday's crucial debate -- perhaps the President's last chance to turn around his
The former President on Wednesday released four years of pent-up frustration in a scathing Philadelphia appearance that is likely to further irk an already irritable commander-in-chief ahead of his showdown with Democratic nominee Joe Biden. The debate in Nashville, Tennessee, comes at a fateful moment in the White House race as fresh polls emphasize the task Trump faces in pulling off another shock election triumph in 12 days.
In a new CNN/SSRS survey, Biden leads comfortably in Pennsylvania, potentially the decisive swing state, with a clear path to 270 electoral votes if he converts leads in Wisconsin and Michigan into wins. That leaves Trump needing the kind of late surge that took him to a stunning 2016 victory over Democrat Hillary Clinton. It also means his clash with Biden, already crucial given that their second debate was canceled after his Covid-19 diagnosis, could be a final opportunity to shake up the race.
But with a staggering 40 million early votes cast, the capacity of either candidate to change the dynamics of the election is becoming increasingly limited. As he geared up for the debate, Trump slammed the whole exercise as unfair, resentful about at a plan to periodically mute the candidates' mics designed to limit his belligerent interruptions and baselessly accusing moderator Kristen Welker of NBC of bias.
He is likely to have been especially infuriated by Obama's mockery and forensic dismissal of his record given his contempt for, and obsession with, the former President. Obama's appearance on the eve of a debate in which Trump's hair-trigger temper will be sorely tested was probably not a coincidence.
In another development on Wednesday, federal officials said that both Iran and Russia have obtained US voter registration information in an effort to interfere in the election. They said Islamic Republic operatives posed as the far-right Proud Boys -- a group which Trump refused to fully repudiate during the last debate -- to send intimidating emails to voters.
Director of National Intelligence John Ratcliffe said Iran's intent was to damage the President. Democrats and former officials in the covert officials will view his statement through a political lens, given his failure to immediately provide evidence and his past efforts to politicize intelligence to help Trump.
'They would have called me Beijing Barry' 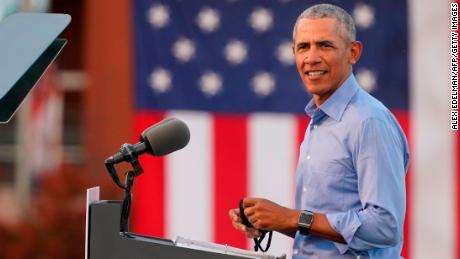 The 44th President pounced on Trump's admission that there is "not much" he would change in one of the world's least successful attempts to quell a virus that has killed more than 221,000 Americans and devastated the economy.
"Really? Not much? Nothing you can think of that could have helped some people keep their loved ones alive?" Obama, who came on stage wearing a face mask bearing the world "Vote."
"Joe's not going to screw up testing. He's not going to call scientists idiots. He's not going to host a super spreader event at the White House. Joe will get this pandemic under control," Obama said of the man he chose to be his vice president 12 years ago.
His intervention, an extraordinarily scathing rebuke of a sitting President by a former President, was a reminder in itself how the Trump era has shredded White House protocols. More broadly, it emphasized how the politics of the last 12 years are an unresolved contest between the philosophies and deportment of the first Black President and a successor who built his brand with a racist conspiracy theory about his predecessor's birth place.
Obama particularly relished exploiting a report by The New York Times based on Trump's financial records that the President has a bank account in China -- even as he slams Biden for being soft on the communist giant.
"Listen, can you imagine, if I had had a secret Chinese bank account when I was running for reelection?" Obama said. "You think Fox News might have been a little concerned about that? They would have called me Beijing Barry."
Obama rained down attack after attack on Trump and his character. He belittled him for "tweeting at the television." He warned "this President wants full credit for the economy he inherited and zero blame for the pandemic he ignored."
Obama said Biden and his running mate, California Sen. Kamala Harris, had a plan to get America out of its current "mess" and warned Trump's rhetoric had emboldened the cruelty and racism of others.
He blasted the President's unfulfilled promises to come up with a replacement for Obamacare, even though his administration will argue for its eradication in the Supreme Court a week after the election.
"It's been coming in two weeks for the last 10 years. Where is it?"
And he portrayed the possibility of a Biden-Harris administration as a chance for some peace and quiet after four tumultuous years.
"With Joe and Kamala at the helm, you're not going to have to think about the crazy things they said every day ... It just won't be so exhausting. You might be able to have a Thanksgiving dinner without having an argument."
Trump tries to mock Obama 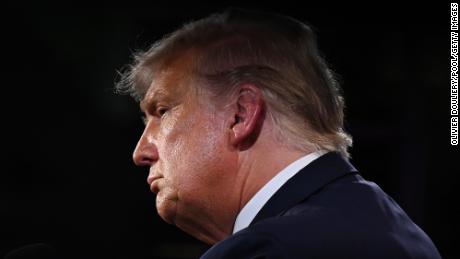 In a campaign setting, Obama's speech was even more visceral than his more spiritual and lawyerly indictments of Trump delivered at the funeral of late Rep. John Lewis and at the virtual Democratic National Convention. It was a reminder of Obama's talent as an orator and skill at framing overarching political arguments that won him two White House terms.
But the former President was also a singular figure who often struggled to transfer his aura to other Democratic candidates. As he spoke it was impossible not to be reminded that it was also in Philadelphia four years ago where he gave a speech urging Americans to choose Hillary Clinton on election eve in which he also took aim at Trump's policies and temperament. The next day, Trump defied the polls and pulled off a shock win in Pennsylvania en route to a national victory that was in essence a backlash against Obama's eight years in office.
Obama obliquely referred to that moment on Wednesday, when he pleaded with Democratic voters to turn up higher numbers than in 2016.
"I don't care about the polls. There were a whole bunch of polls last time. Didn't work out. Because a whole bunch of folks stayed at home. And got lazy and complacent. Not this time. Not in this election. Not this time," he said.
While Obama blasted his presidency, Trump traveled to North Carolina, a swing state that he needs to retain to keep his path to a second term viable, and suggested the former President's reemergence was good news.
"There was nobody that campaigned harder for crooked Hillary Clinton than Obama, right? He was all over the place," Trump said at a rally in Gastonia. "The only one who was more unhappy than crooked Hillary that night was Barack Hussein Obama."
Harris was also in North Carolina on Wednesday, and aimed some of the most pointed rhetoric of the Democratic general election campaign so far.
"People have been asking me -- journalists -- well, you know, do you think he's a racist? Yes. Yes, I do," Harris said.
"And there's a pattern here ... I don't say that lightly. One should never say that lightly. But there's a pattern here."
Trump needs a comeback 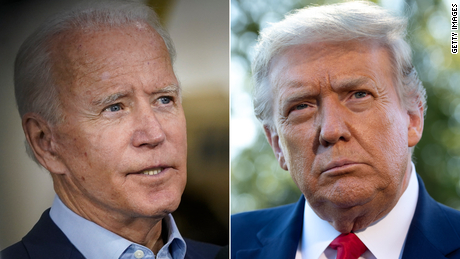 Trump's presence in yet another state that was in his column in 2016 was just the latest attempt by the President to defend territory that his campaign would have liked to consider safe by now.
The President enters the last 12 days of the campaign -- in which he is planning a blitz of swing states in rallies that ignore the threat that crowds can transmit Covid-19 -- needing one of the most impressive comebacks in modern politics.
Two new swing state polls for CNN by SSRS explain the magnitude of his task. Biden leads by 53% to 43% in Pennsylvania, which has 20 electoral votes and which he cannot afford to lose. In Florida, another Trump state in 2016, the contest is within the margin of error with Biden up 4% among likely voters. The surveys were consistent with other recent polling in the two states. Trump's campaign insists that public polling is inaccurate since it does not properly model the size of the President's support and predicts that a huge influx of new Trump voters will confound polls again and carry him to victory.
As millions of Americans cast early and absentee ballots -- an attractive option as the pandemic worsens it's already clear that Trump has lost one Republican vote -- that of his party's 2012 nominee, Utah Sen. Mitt Romney.
"I did not vote for the President," Romney said Wednesday, though declined to disclose whether he had voted for Biden or someone else.