Hot topics close
Home Presidential debate What Do Polls Say About the Issues on the Agenda for Tonight’s Debate?

What Do Polls Say About the Issues on the Agenda for Tonight’s Debate?

The New York Times
Share on FacebookShare Share on TwitterTweet
On topics from climate change to leadership, most Americans say they prefer Joe Biden over President Trump. 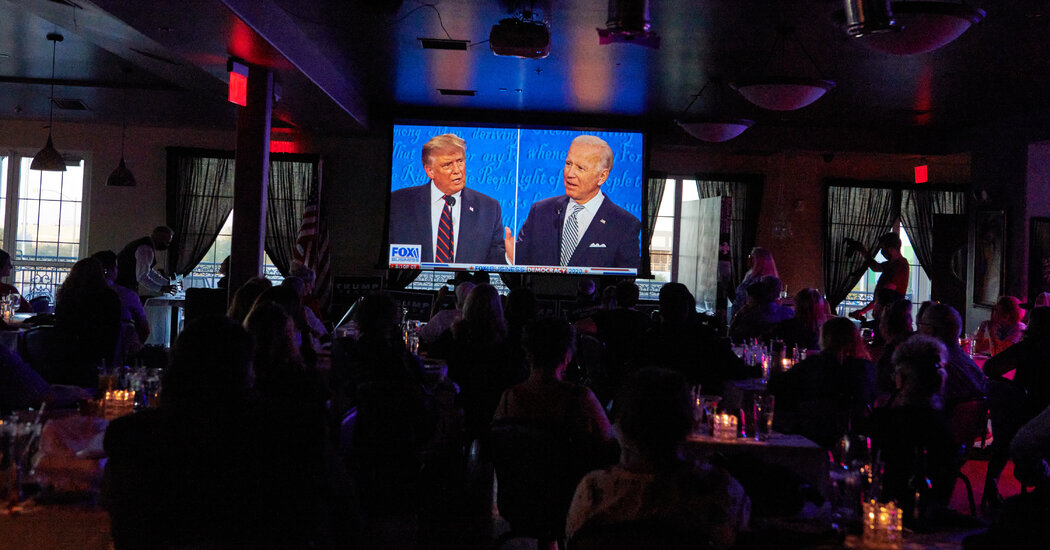 At the presidential debate on Thursday, President Trump may not be looking for an exact repeat of his performance last month, when voters widely panned his blunt-ended attacks on Joseph R. Biden Jr. at their first face-off.

And even if he wanted to reprise that steamroller style, it might be tough to pull off: The Commission on Presidential Debates announced this week that it had changed the ground rules, saying it will mute each candidate’s microphone for parts of the debate.

So maybe — just maybe — this debate will provide a more meaningful opportunity to hear where each candidate comes down on the issues. To that end, the commission also revealed this week which topics the event will focus on: the coronavirus, “American families,” race relations, climate change, national security and leadership.

Below is a look at where Americans stand on each subject, according to public opinion data.

Early in the spring, when the coronavirus shutdown had just begun, some voters expressed tentative support for Mr. Trump’s leadership on the pandemic, signaling a willingness to give him the benefit of the doubt. But as it became clear that he had no intention of mounting a national response to contain the virus, faith in his performance plummeted.

Today, the omnipresent issue of the 2020 campaign also happens to be one of Mr. Trump’s weakest suits. And with experts warning that the United States is entering a third surge in virus cases, the president is having a hard time turning the page. According to a New York Times/Siena College poll released this week, a majority of likely voters say they think the worst of the pandemic is still ahead.

Mr. Trump has railed against medical experts and generally refused to wear a mask, even though a vast majority of voters consistently say that they trust government scientists over the president. They also say that they would support a national mask-wearing mandate, something the president has refused to consider.

And while Mr. Trump has pinned his hopes on the swift approval of a coronavirus vaccine, polling suggests that many voters agree with Mr. Biden, who has accused the president of pushing too hard for a swift approval of any such drug. In a CNN poll this month, just one in five Americans expressed a high level of confidence that the current search for a vaccine was “properly balancing speed and safety.”

Mr. Biden has built a formidable polling advantage over Mr. Trump on the coronavirus: By double-digit margins, voters say they trust him over the president to handle it. This dovetails with their views on health care policy in general, on which voters are also overwhelmingly more likely to prefer Mr. Biden.

Things have grown more complicated for Americans in all walks of life this year, as the pandemic and the related economic downturn have caused untold disruptions. It’s not quite clear what the debate’s moderator, Kristen Welker, has planned for the section titled “American families,” but a range of polling data shows that voters remain shaken by the pandemic’s effects and uncertain about what the future holds.

The recent Times/Siena poll found that 50 percent of likely voters said they were actually better off than four years ago, while just a third said they were doing worse. But when asked about the country at large, 55 percent said things had grown worse.

When protests against racial injustice began to rage after the police killings of George Floyd and Breonna Taylor in the spring, the presidential candidates staked out sharply divergent positions. Mr. Biden resisted calls to “defund the police,” but he emphasized the need for sweeping police reform. Speaking at Mr. Floyd’s funeral, he declared, “Now is the time for racial justice.”

Mr. Trump targeted his ire instead at protesters, broadly painting them as lawless and violent. He railed against the desecration of monuments, issued an executive order banning anti-bias training for government contractors, and questioned the existence of systemic racism.

This message resonates with the president’s base. During Mr. Trump’s term, Republicans have grown more likely to say that it is white people who face bias, according to polling from the Public Religion Research Institute: 57 percent of Republicans said white people faced a lot of discrimination in the institute’s 2020 American Values Survey. Members of Mr. Trump’s party are now more likely to say that white people or Christians face a great deal of discrimination than they are to say that about Black people, the survey found.

Yet for the rest of Americans — including white voters beyond the Republican Party — concern about anti-Black discrimination hit a record high this year. Partly as a result, voters overwhelmingly pick Mr. Biden as the better option to handle racial issues. In an ABC News/Ipsos poll last month, voters said Mr. Biden would do a better job handling issues of racial discrimination than Mr. Trump would by roughly two to one.

Mr. Biden’s advantage holds even when voters are asked pointedly about “law and order,” a term Mr. Trump favors. And it holds even in heavily white states, such as Wisconsin, where support for the Black Lives Matter movement has dipped since the spring. In a Marquette Law School poll of Wisconsin this month, just 46 percent of voters expressed a positive view of Black Lives Matter — down from 59 percent in June — but even fewer, 37 percent, said they liked how Mr. Trump had handled the protests.

Mr. Trump has consistently denied the science of climate change, leaving him out of step with most Americans — including, at this point, members of his own party. Nearly two-thirds of Americans said they thought the government was doing too little to confront climate change, according to a Pew Research Center poll this year. It found majorities of both Democrats and Republicans supporting a range of federal measures to confront global warming.

By a huge margin — 58 percent to 19 percent — registered voters said in an NBC News/Wall Street Journal poll that Mr. Biden would handle the response to climate change better than Mr. Trump.

And despite Mr. Trump’s insistence that the forest fires in the West have been caused primarily by poor “forest management,” likely voters said by a 21-point margin that they thought climate change had contributed to creating the blazes, a Quinnipiac University poll found.

Foreign affairs hasn’t been a major topic of public interest during Mr. Trump’s term. Like President Barack Obama before him, he has avoided engaging in major new conflicts abroad, even as he has not extricated the military from the Middle East, as he said in 2016 that he would. Unlike Mr. Obama, he has blown up relationships with allies, and he has publicly criticized his own military officials.

Voters were about evenly split on whether Mr. Trump was being too hostile to America’s traditional allies (43 percent said yes) or handling those allegiances well (44 percent), according to a Quinnipiac University poll last year. Just 6 percent said he was being too friendly.

Americans broadly think Mr. Biden would do a better job of handling foreign policy. Fifty-nine percent chose him on the issue, according to a CNN poll last month, compared with just 39 percent who picked Mr. Trump.

At the vice-presidential debate two weeks ago, Mike Pence repeatedly highlighted the killing of Qassim Suleimani, an Iranian general, whom Mr. Trump ordered assassinated in January. Many expert observers saw the move as a dangerous escalation of tensions with Iran, but the White House has come to treat it as an unqualified victory. By a 10-point margin, voters were more likely to say in a Fox News poll at the time that they agreed with Mr. Trump’s decision to order General Suleimani’s killing, rather than to disagree — though another 14 percent held no opinion either way.

In 2016, Mr. Trump consistently scored ahead of Hillary Clinton in polls measuring whom voters considered to be the “stronger leader.” Once he took office, the same aggressive personality that propelled him to the White House never endeared him to a majority of voters. He has spent his presidency without ever achieving a majority favorable rating from the public, and it is invariably his personal qualities that voters say irk them most about him.

When asked in an ABC News/Washington Post poll last year whether they thought he had the right personality and temperament to do the job of president, 62 percent of Americans said no, while just 36 percent said yes.

The campaign trail — and especially the coronavirus — has done little to change that perception. Fully 62 percent of voters said in an ABC/Post poll this month that they didn’t trust Mr. Trump to be honest with them about the coronavirus, echoing one of the most frequent criticisms about his leadership over all: that he simply isn’t trustworthy with the American people.

Asked in a CNN poll this month whom they considered more honest and trustworthy, Americans chose Mr. Biden over Mr. Trump, 58 percent to 33 percent.