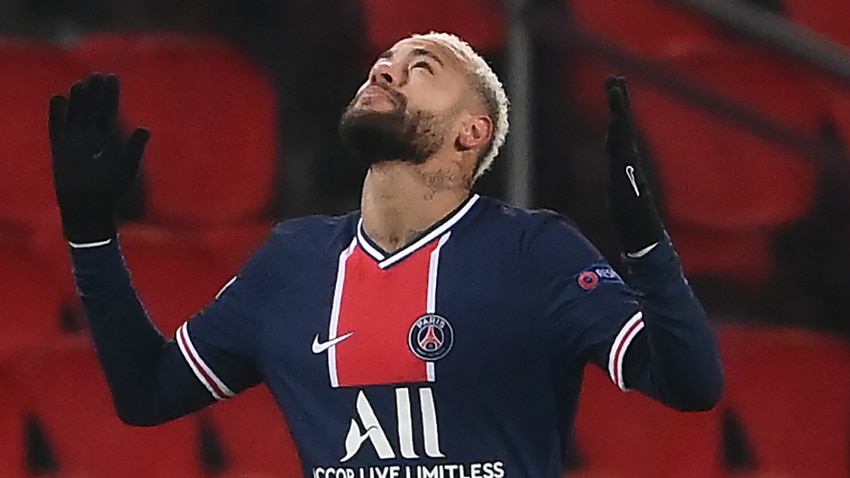 The fixture at Parc des Princes was suspended after 13 minutes on Wednesday (AEDT) after it was alleged fourth official Sebastian Coltescu had exposed Basaksehir assistant Pierre Webo to racist language.

UEFA consequently launched an investigation and, after players for both teams united to make a stand against discrimination, Neymar ran the show, netting twice in a superb first-half showing and completing his hat-trick early in the second.

Kylian Mbappe ended a year-long wait for a Champions League goal before the break and scored a second following Mehmet Topal's brief riposte as PSG beat RB Leipzig to top billing in the pool.

Fredrik Gulbrandsen and Mbappe had missed great chances by the time Neymar received Marco Verratti's pass, nutmegged Carlos Ponck and bent a sublime effort into the top-right corner to open the scoring in sensational fashion.

A rapid counter involving Rafinha and Mbappe resulted in Neymar squeezing his shot past Fehmi Mert Gunok to double the lead.

Mbappe made sure of the win before half-time, smashing home from 12 yards after Mitchel Bakker's tap-in was ruled out for offside but Gunok was penalised for fouling Neymar.

The visitors were again tormented by Neymar, who cut in from the left, combined with Angel Di Maria and rifled in his third from 20 yards five minutes after the restart.

Topal knew little about diverting Irfan Can Kahveci's powerful blast home to frustrate PSG keeper Keylor Navas, but Neymar led the charge from which Mbappe tapped in Di Maria's lay-off to round off a five-star showing.