The Hindu
Share on FacebookShare Share on TwitterTweet
Punjab squeaks through off the last ball after Rahul and Gayle fifties, prevents Kohli’s men from climbing to second on the table 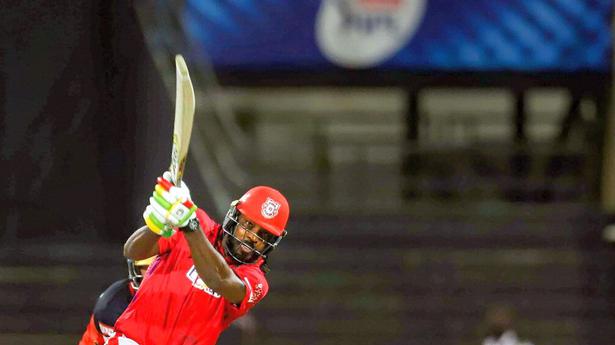 Punjab squeaks through off the last ball after Rahul and Gayle fifties, prevents Kohli’s men from climbing to second on the table

Kings XI Punjab nearly made a mess of it once again, but Nicholas Pooran's six off the last ball ended the team's losing streak on Thursday. K.L. Rahul's men beat Royal Challengers Bangalore by eight wickets at the Sharjah Cricket Stadium.

Just five came off the 19th over bowled by Isuru Udana, but only two were required off six balls. But Yuzvendra Chahal kept Gayle — who did well to overcome the rustiness of not playing a game for nine months — quiet for the first two balls.

The scores were tied — at 171 — when the ‘Universe Boss’ was run out off the penultimate ball.

He was called through for a non-existent single by Rahul, who only managed two runs off six balls in the 19th and 20th overs.

Fortunately Pooran took charge, stepping out and hitting the final ball over long-on. KXIP's only other win this season was also against RCB.

Rahul must have heaved a sigh of relief when he saw Pooran clear the fence. The skipper had played some glorious strokes, like the pull over square-leg off Navdeep Saini.

Earlier, captain Virat Kohli, in his 200th game for RCB, top-scored with 48 (39b, 3x4), but his side was restricted well by the KXIP bowlers, led by leg-spinner M. Ashwin.

If it wasn’t for the 24 runs clobbered in the final over by Chris Morris (25 not out, 8b, 1x4, 3x6) and Udana off Mohammed Shami, RCB likely wouldn’t have been in the game.

Before the nightmare, though, Shami had bowled a dream over in which he dismissed both Kohli and A.B. de Villiers.

The South African genius had come in too late, however, with RCB promoting left-handers Washington Sundar and Shivam Dube to tackle leg-spin.

The decision raised questions, especially given what de Villiers managed in his previous outing in Sharjah, earlier this week, when he single-handedly put the game beyond Kolkata Knight Riders.

KXIP won by eight wickets off the final delivery.