The Hindu
Share on FacebookShare Share on TwitterTweet
Rajasthan Royals are fielding an unchanged side, while Royal Challengers Bangalore made couple of changes. 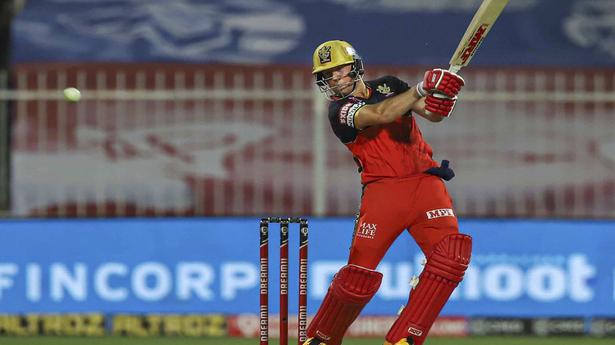 Rajasthan Royals are fielding an unchanged side, while Royal Challengers Bangalore made couple of changes.

For the second time in six days, A.B. de Villiers swung a game Royal Challengers Bangalore's way with a blinder of a knock.

Rajasthan Royals, which made 177 for six at the Dubai International Stadium after winning the toss, was beaten by seven wickets with two balls to spare.

If his 33-ball 73 had set up RCB's victory, batting first against Kolkata Knight Riders at Sharjah earlier in the week, de Villiers put on a masterclass in chasing down an imposing target on Saturday. His 55 not out came off just 22 balls (1x4, 6x6).

Its sixth win in nine matches helped RCB stay in the vicinity of the two standout teams of the competition, Mumbai Indians and Delhi Capitals, with 12 points. RR remains near the bottom, on six points.

When RCB’s two set batsmen had returned to the dugout off successive balls, RR may have sensed an opportunity.

When the captain succumbed to a brilliant piece of fielding by Rahul Tewatia at deep mid-wicket — he caught the ball on the run, released it before he went over the rope and came back in to complete the catch — 76 was needed off 41 balls.

It was 35 off 12 when Steve Smith handed the ball to Jaydev Unadkat. The left-arm seamer's first three balls were dispatched over the on-side boundary by de Villiers in imperious style.

Twenty-five runs came off the penultimate over. de Villiers then finished the job by sending RR’s best bowler Jofra Archer over the deep mid-wicket boundary.

Earlier, a rejigged batting line-up helped RR post a competitive total. The decision to send in Robin Uthappa as opener paid dividends. He made a sparkling 41 (22b, 7x4, 1x6) and put on 50 for the first wicket with Ben Stokes, who became one of Chris Morris’ four victims.

The South African hammered six sixes and a four

With 35 needed off two overs, 25 were scored off the penultimate over bowled by Unadkat