The Dream Shake
Share on FacebookShare Share on TwitterTweet
Russell Westbrook’s first season with the Houston Rockets was a rollercoaster of a ride affected most by the COVID-19 pandemic. 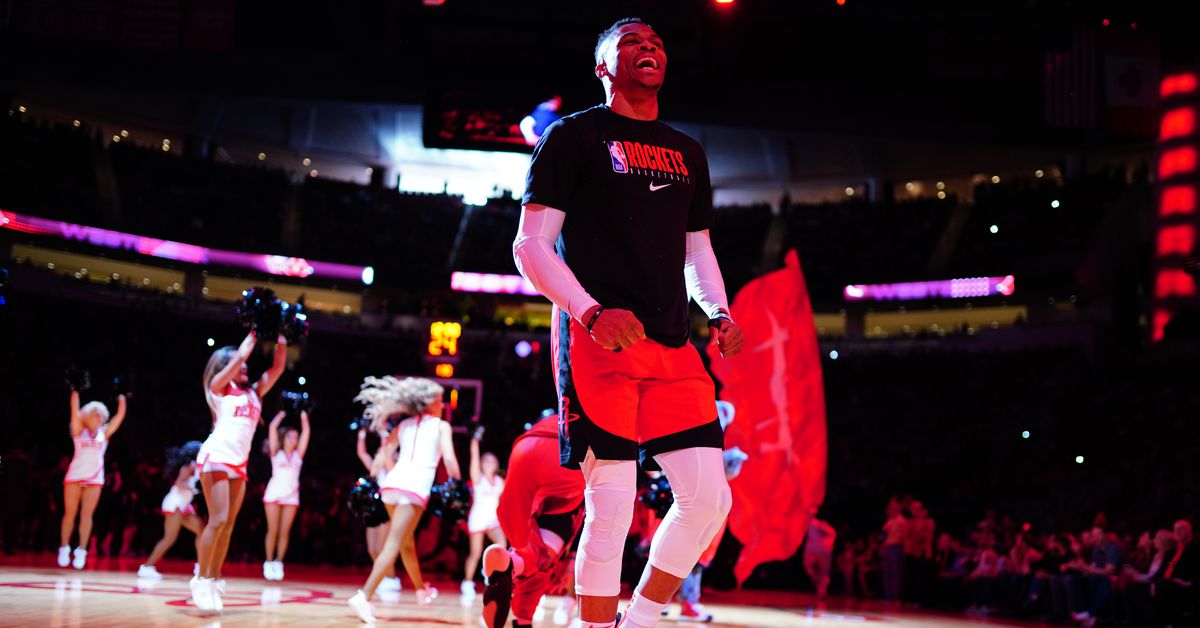 Recap: Opening night, Oct. 26, 2019. Running off the excitement and adrenaline of a new season, Russell Westbrook did his signature pre-game ritual in front of the home crowd. But instead of hyping-up the fans inside Chesapeake Energy Arena, Westbrook celebrated the start of a new year on the floor of the Toyota Center draped in Houston Rockets gear.

It was Westbrook’s first official game as a Rocket. In July, Houston completed a blockbuster trade that sent Chris Paul and four draft picks to Oklahoma City in exchange for the former league MVP (2017).

The results from his debut with the Rockets ended in a six-point defeat to the Milwaukee Bucks. He scored a team-high 24 points and pulled down 16 rebounds, but it was obvious Westbrook was still trying to develop his niche within the Rockets’ system — especially while getting re-acquainted to play alongside James Harden.

Two days later, a triple-double performance led Houston to their first victory of the 2019-20 season over the New Orleans Pelicans.

The first two games of the year summarize Westbrook’s debut season with the Rockets in its totality. At times, he resembled a player who did not know when to defer to his All-Star teammate or take over as the best player on the court. The confusion cost Houston several wins on the season. But it was expected for a guy who was trying to “figure it out” as the season progressed.

Westbrook’s fit in Houston was a constant struggle up until an 11-game stretch that began against the Los Angeles Lakers. The L.A. native scored 41 points (60.7% FG, 50% 3PT) in a 121-111 victory for Houston, and it appeared that Westbrook and the Rockets had figured it out due to their commitment to micro-ball.

The mid-season change led to Westbrook playing the best stretch of games in his career. He averaged 31.7 points (54.6 FG, 38.5 3PT), 8.2 rebounds, 5.5 assists, and 1.7 steals. The last thing he needed was something to come along and disrupt the rhythm and the progress he had made in Houston.

March 11, 2020, the NBA embarked on a four-month hiatus due to COVID-19. Unlike his teammate Eric Gordon, who benefited from the layoff period, the suspension of the league was detrimental to Westbrook’s season.

A nagging hamstring injury forced Westbrook to miss half of the NBA’s seeding games — including the first four games of the post-season. The ramifications had a negative impact on his on-court production, as he averaged 17.9 points (42.1% FG, 24.2% 3PT), 7.0 rebounds, 4.6 assists and 1.5 steal inside the Orlando Bubble.

2021 Outlook: It’s unfortunate, but an altercation with Rajon Rondo’s brother was the lasting image of Westbrook for the 2020 season. If not for the pandemic, his season may have ended differently from the 10-point outing he showcased during the Rockets post-season elimination to the Lakers.

It is also worth mentioning that Westbrook did contract the coronavirus prior to his departure to Orlando. And it is uncertain what type of implications the virus had on his play inside the bubble.

With so many questions left unanswered, it should be a no-brainer that Westbrook will make his return to the Rockets for the 2021 season. There are some rumblings of a potential departure from Houston. But it would be absurd for the Rockets to depart from their All-Star point guard after one season — especially if they hire a coach whose philosophy caters to Westbrook’s play style more so than that of Mike D’Antoni.

However, with the recent jettison of Daryl Morey, the future of the Rockets seems more unclear than ever.

Westbrook’s first season in Houston was not a complete failure, but it did leave a lot to be desired. Whoever takes the helm as the Rockets’ next head coach and general manager should consider Westbrook’s 11-game stretch before shipping him off to another destination.

Houston should give the Westbrook experiment one more year to prove he is the missing piece to a potential championship title. An experiment that began full of excitement inside the Toyota Center nearly a year ago, disrupted by unprecedented problems of the real world.