Sporting News AU
Share on FacebookShare Share on TwitterTweet
He did a mini lap of honour and was chaired off the field by his Melbourne Storm team-mates – but Cameron Smith insists he still doesn’t know if next weekend’s grand-final will be the final act of his legendary rugby league career. 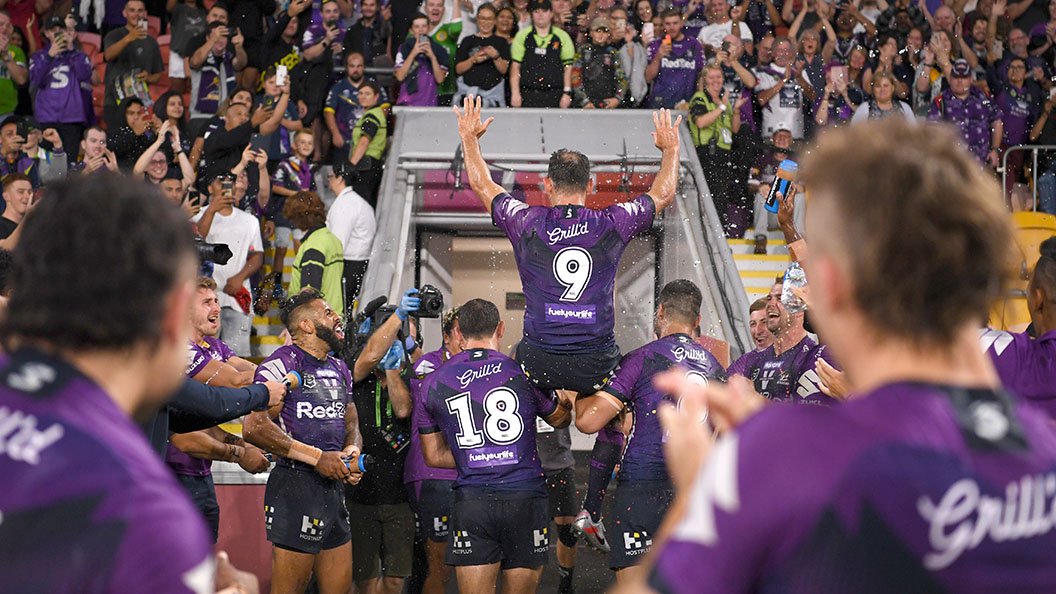 He did a mini lap of honour and was chaired off the field by his Melbourne Storm team-mates – but Cameron Smith insists he still doesn’t know if next weekend’s grand-final will be the final act of his legendary rugby league career.

Pundits and fans understandably jumped to the conclusion Smith’s 430th NRL game against either Penrith or South Sydney on Sunday will be his last after the wild post-match celebrations on Friday night.

But the 37-year-old revealed it was coach Craig Bellamy who instructed his players to celebrate the skipper just in case the 30-10 victory over the Canberra Raiders is the Queensland Maroons legend’s final game at Suncorp Stadium.

“I think this bloke (Bellamy) has got some explaining to do,” Smith said.

MORE: 'Greatest play of Cameron Smith's career': Could this be one of Smith's last moments of NRL magic?

“I got some photos in front of the fans and then the big fella pulled me up and said we weren’t going anywhere.”

Asked directly if he has played his final game at Suncorp Stadium, Smith replied: “I can’t tell you that mate, I don’t know.

“All I’ve worried about this year is trying to play well and just enjoy watching these young fellas grow as footballers and grow as men.

“I’ve been very fortunate in my career to be involved in some very big games with the Storm and lucky enough to win some premierships along the way.

“There’s a lot of guys starting out their career that haven’t had that opportunity yet so I’m just enjoying their success at the moment and sharing their journey, so I haven’t thought past that.”

Pressed on whether the outcome of next week’s NRL decider will influence his decision on his plans for next season, the Storm skipper replied: “I won’t know that until next week and I’m not getting ahead of myself and worrying about what happens after that game.

“All I’m focused on is what I can do for the team now and that’s getting myself ready for next week.

“We know we’re in, there’s a game tomorrow night that needs to happen before we’ll know who our opponents are going to be.

“I’m just going to approach next week like I’ve done every other day this year, every other day in my entire career, and then once the game’s over next week I’ve got some thinking to do and decisions to make, there’s no doubt about that.”

Meanwhile, Bellamy insists he still has no idea what Smith plans to do beyond this season but thought celebrating the veteran rake was the right thing to do after the impressive win over the Raiders.

“I just thought it’d be a good idea in case it is (Smith’s last game in Brisbane), but who knows?” Bellamy said.

“He ain’t telling anyone but I just think it’ll be a nice photo if he does decide in January to pull the pin or whatever.

“Well that’s what he did in Origin, he waited (until) two weeks (out from the series opener) and poor old Kevvie (Walters) had a heart attack.

“So I just thought it was the right thing to do in case it is his last game at Suncorp, he’s had obviously a lot of wonderful memories here.”