Sporting News AU
Share on FacebookShare Share on TwitterTweet
Cooper Cronk is convinced next Sunday’s NRL grand-final will be the final game of Cameron Smith’s career and believes the veteran’s Melbourne Storm team-mates are all in on the secret. 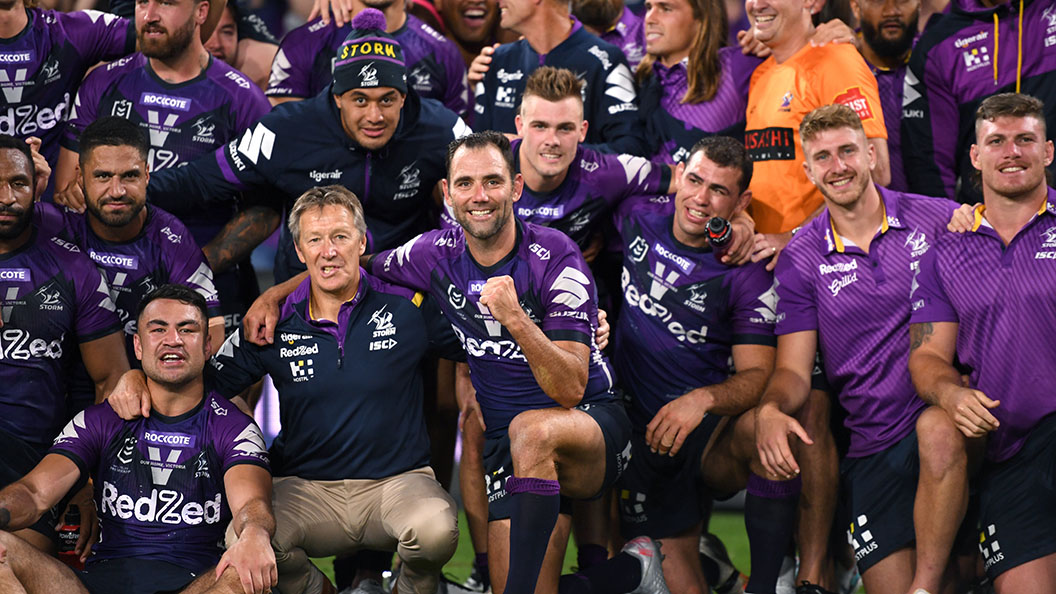 Cooper Cronk is convinced next Sunday’s NRL grand-final will be the final game of Cameron Smith’s career and believes the veteran’s Melbourne Storm team-mates are all in on the secret.

The pair have reportedly fallen out in recent years but the former Storm No.7 knows a thing or two about how the Storm machine operates.

“This is my personal take, I think Cameron (has known) that he’s going to be retiring for a long period of time,” Cronk told Fox League.

“… I think he’s told the team, I think everyone at the Melbourne Storm knows and they’re keeping it in house and he’s going to deal with it how he wants to.

“Because how he spoke before the game, really inspired that start to the match and I know how the Melbourne Storm operate, they don’t like things leaking out of their department.

“So I would dare say that Cameron Smith is retiring and they’re keeping it in house.”

Smith was chaired off Suncorp Stadium by his team-mates following the Storm’s ominous 30-10 preliminary final win over the Canberra Raiders.

The veteran rake is yet to announce whether he’ll call time on his 429-game NRL career this season or play on at either the Storm or a rival club.

Smith once again refused to confirm his future plans at the post-match press conference on Friday night and claimed coach Craig Bellamy instructed his team-mates to celebrate as if it was the former Queensland captain’s last game in Brisbane.

But while his fellow pundits and fans on social media assumed Smith would announce his decision to retire post-match, Cronk correctly predicted his former skipper would not reveal his plans.

“I don’t think he does (make an announcement),” Cronk said prior to Smith’s post-match press conference.

“Yes, this looks like an announcement but he’s said all along the way he doesn’t want to make it about himself and if you’re going to make an announcement in grand-final week well the attention will be on Cameron Smith.

“He’s been stoic about not saying anything, removed himself from most media commitments so he doesn’t get asked.

“… His dad was non-committal just before, so I just don’t know what to make of it but if it is, congratulations Cameron, you’ve been one hell of a player mate.”

Meanwhile, Cronk declared the Storm the team to beat in next week’s decider against either the Perntih Panthers or South Sydney Rabbitohs.

“I think we just saw the premiers play,” he said.

“That was a hot start, they know the journey, they’ve got one hell of an inspiration to send off the greatest player the game’s ever seen off on the top note and the one that he deserves.

“… I think they’ve got themselves in the best possible position because what they’ve done is they’ve changed their approach and strategy this year.

“They’ve fallen short the last two years so they’ve gone down the mode of resting and priming their big guns for the right time of year.

“That’s their second game in a month, their star players, they’re going to have one more dash at the trophy and they’re exactly where they hoped they would be.”